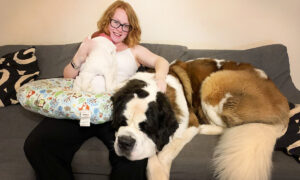 Cha Cha, the 24-year-old chimpanzee from in Yagiyama Zoological Park in Sendai, Japan, decided April 14 would be the day he’d make a literal leap for freedom.

Related Coverage
Car Caught on Video Somersaulting Before Landing on Another Vehicle
Cha Cha regains his balance and continues to move up the wires, showing no sign that the sedative worked.

He led authorities on an hour-long chase, getting atop an electrical pole by climbing the wires with his hands and feet. After finally stopping atop a fixture, officials were able to dart him with a sedative—but that didn’t stop him.

In the video, moments after being struck with the dart, the ape grows angry and takes a leap toward the boom-lift operator, tumbling onto adjacent wires.

Cha Cha regains his balance and continues to move up the wires, showing no sign that the sedative worked.

Once he reaches another pole, he begins to lose consciousness. After perching near the peak, he loses control of his body, falling onto a lower wire. (Some commenters allude the ape might’ve been shocked with electricity, but it is unclear)

With a stroke of consciousness, he hangs on, although clearly slipping. Surely enough, after nearly 25 seconds of hanging on, he falls.

His descent is gasp-worthy, clipping a set of wires before spinning, and falling torso-first onto the pavement.

It appears the police and zoo staff prepared a net, which does seem to break his fall somewhat, but his awkward tumble makes it difficult for them to make the catch; and stop Cha Cha from landing face-down.

The authorities tend to the ape, and move him into an ambulance.

It remains unknown exactly how Cha Cha made it out to lead authorities on this intense escapade.