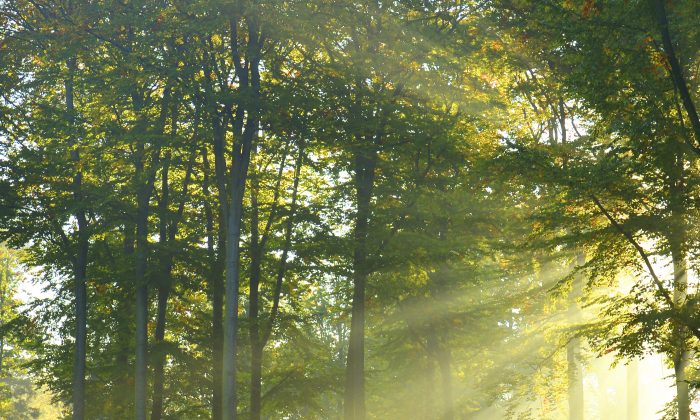 Ryan Trapani’s first introduction to forestry was a housing development in New Paltz that didn’t happen. “I used to pick berries there all the time when I was a kid. That mimicked a nice little clear cut and it produced some of the best wildlife habitat.” Thirty years later, the area might have developed into a full stand of trees without much light.

According to Trapani, education forester for the organization, 70 to 90 percent of forested land in the Catskills is privately owned. Landowners have a variety of reasons for owning, including birding, hunting, timber, or firewood. The organization works with the small woodlot owner to achieve his objectives for his woods.

The most diverse forests start with what Trapani calls a “mass disturbance,” such as a wildfire which clear-cuts a wide swath of forest. He says a forest should have some shade-intolerant varieties that need a lot of sun to thrive. A clear-cut can begin the process that creates the sights and sounds of a healthy woodland.

Trapani says, as a young forester, he was sent to a heavily forested area to work. It was so quiet that loneliness set in. Then he worked in a 1000-acre area that had been devastated by a forest fire and things were hopping. Chestnuts were snapping about, planting themselves, and growing into trees, and bears visited the area for the nuts. There was so much undergrowth deer liked that they couldn’t get enough. Low bush blueberries, blackberries, and other fruit sprung up.

Since 1983 the Catskill Forest Association has been advising private landowners to actively managing their woodlots. Trapani works with woodlot owners to achieve their forestry goals.

There is a market for valuable trees, such as black cherry, sugar maple, and red oak, which are used for high-end furniture or boards. Trapani says there is not a market for low grade trees. “We don’t have a paper market, we don’t have a woody biomass market, and our fire market is pretty insignificant.”

The organization supports clear-cutting in which all grades of wood can be used and the area can become reforested in a natural way. He says there would not be a problem of over-harvesting. “Our forests are growing three times faster than they are being harvested.”

The organization supports clear-cutting so the area can become reforested in a natural way.

Trapani wants to help landowners grow an ideal working forest which is one that has healthy trees and also meets the goals of the landowner. He says that everyone’s goals are different, which makes diversity happen in the forest landscape.

Catskill Forest does not recommend selectively removing larger, more valuable trees to give smaller trees room to grow. In both selective cutting and taking only the most valuable trees, most are removed before they can give the best return on investment.

The association goes against conventional wisdom that taking out the most valuable trees, called high-grading, is good for the forest. The association begs to differ. The association website gives the analogy of a stable where, after each race, they sell the top horses and breed the losers, and the stable soon turns out mostly slow horses. “If you sell your best trees and leave the runts, you accomplish the same thing.”

To keep a forested area healthy the association recommends clear-cutting, or the removal of all trees, so that the forest can regenerate naturally. Catskill Forest calls high-grading a “hidden disaster” since it goes unnoticed in a heavily-forested area.

The best way to tell the age of a tree is by its height. Even if some trees are wider than others but all the same height, they are the same age. He says that the healthiest trees get the most sun and increase their width. When woodlot owners cut the best trees, they reduce the health of the forest.

It’s easy to take the most valuable trees for immediate income before they reach their potential. The practice of high-grading considers only the present economic value of a tree when it is removed, according to the association.

The best way to tell the age of a tree is by its height.

Sunlight fertilizes a healthy private woodlot, according to Trapani. The Catskills are more heavily forested, and thus shaded, than 100 years ago when farmers cleared the land for agriculture. Settlers cleared their land by girdling, cutting, or burning trees.

According to Dr. Michael Kudish, the average elevation to which pasture climbed in the Catskills was 2,220 feet. Pasture climbed higher in areas with gentler slopes and better soils that provided superior growing conditions for grass for foraging livestock. Cleared lands are windier, sunnier, hotter, colder, and drier.

Trapani says an ideal working forest has healthy trees and meets the goals of the owner. Landowners want objective advice, and that’s what Catskill Forest gives. Just a like backyard vegetable garden, most landowners have their own preferences for their woods.

Some want to attract wildlife, others may want to grow trees for timber or firewood income. Overall, the goal is to maintain forest health and make it diverse and sustainable.

Depending on the landowner’s objectives, Catskill Forest encourages trees that like both sun and shade in which diversity can flourish. The organization provides programs for every aspect of forest management. The onsite visit gets the foot in the door and introduces the landowner to recommendations and options for their woods, but opens the way for other programs.

A grafting program takes old or volunteer apple trees with established root systems, and grafts a desirable apple variety on them high enough so deer can’t get them. This cuts out years of growing time and gives the landowner benefits much sooner.

The forestry for wildlife program selects trees that are good for wildlife on parcels of small landowners. Competing trees are removed, and the area is opened up. The woodland use program prepares a management plan for forest landowners.