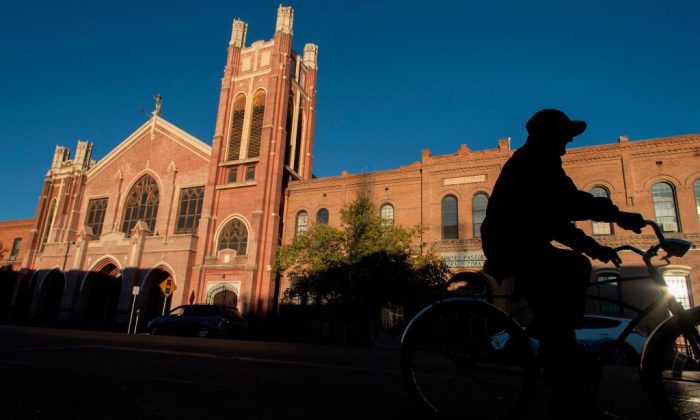 A man rides his bicycle past the Sagrado Corazon Church in the El Segundo Barrio in El Paso, Texas, on Nov. 28, 2018. (PAUL RATJE/AFP/Getty Images)
Crime and Incidents

Church officials in Texas released the names of nearly 300 priests credibly accused of child sexual abuse in the state, one of the largest disclosures by the Roman Catholic Church and the latest revelation in an expanding number of investigations.

Each of the state’s 15 dioceses on Jan. 31 posted the names of accused priests online, totaling 278 individual names with allegations of abuse from thousands of children and going back as far as 70 years.

It’s unclear if the names would result in actual future prosecutions, as many of the priests identified by the church were already deceased. It comes as nearly 20 local, state, or federal investigations, either criminal or civil, have been launched into the church.

Cardinal Daniel DiNardo of the Archdiocese of Galveston-Houston and the current president of the U.S. Conference of Catholic Bishops told The Epoch Times via email that the church, as a whole, needs to be more transparent.

“As you are aware, we are in the midst of a child sexual abuse crisis that is impacting the Church on the local, national and international levels,” he said via email. “The Church has been gravely wounded by the abuse crisis and we must begin the healing process by eliminating the evil of sexual abuse.”

The Galveston-Houston archdiocese named 42 individual priests in their disclosure. The diocese, serving 1.7 million Catholics in 10 counties, is the largest in Texas.

In the meantime, over half of the 187 Roman Catholic dioceses across the United States have started investigating clergy child sex abuse claims or have announced plans to do so.

Some of the 15 dioceses in Texas listed priests abusing as far back as the 1940s while others, such as Diocese of Laredo, which was created in August 2000, listed no names. There are 6,024,000 Catholics in Texas, according to catholic-hierarchy.org.

The lists of priests were compiled separately by each diocese. Some of the dioceses worked with independent consultants such as the Galveston-Houston Archdiocese.

Another major church in the state, the Diocese of Austin, named 22 priests accused of child sexual abuse. Most of the Texas diocese’s lists offered few basic details such as the date the accused priests were removed from the ministry, their ordination, and their current status. Others, such as the Diocese of Austin, provided additional information of the priest’s specific locations they served at during their time.

The disclosure of names in Texas follows a grand jury report in Pennsylvania released publicly in August last year that identified over 300 priests accused of sexually abusing thousands of children. The recent surge of disclosures comes as Roman Catholic leaders attempt to restore trust in their church after decades of cover-ups were exposed.

The nearly 900-page long document details how church administrators often dissuaded victims from reporting abuse to police, pressured law enforcement officials to terminate or avoid an investigation, or conducted their own deficient, biased investigations without reporting crimes against children to the proper authorities.