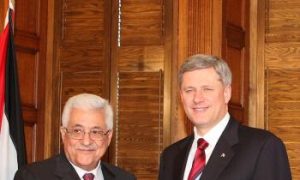 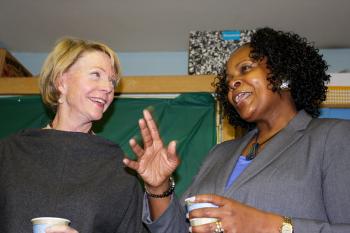 TO THE PRINCIPAL'S OFFICE: Cathie Black (L) mingles with educators and parents, including the principal of PS 626, Joletha Ferguson (R). (Tara MacIsaac/ The Epoch Times)
US

By Tara MacIsaac
Print
NEW YORK—Cathleen Black started out her first day as schools chancellor sitting in a tiny plastic chair with Stephanie Forcer’s fourth-grade class in Bedford-Stuyvesant, Brooklyn. The students of PS 626 returned to school Monday morning after their holiday break. Black began her inaugural tour, which extended to four other schools covering all five boroughs.

Black has visited around 20 schools over the past eight weeks, ranging from A-level to failing on the letter-grade rating system, in preparation for her first day on the job. Mayor Michael Bloomberg joined his chosen chancellor at the Brooklyn school. Black and Bloomberg have both been in the hot seat since the mayor appointed her on Nov. 9, 2010, because she has no background in education.

Despite opposition from some parents and teachers concerning her lack of credentials, Black got the support of Education Commissioner David Steiner, whose waiver was upheld by New York Supreme Court Justice Gerald Connolly last week. Bloomberg and Steiner have touted Black as being a strong and innovative manager under whom magazines such as Popular Mechanics, Esquire, and Good Housekeeping have flourished.
Mrs. Forcer began with a lesson on forming an action plan for working on projects. One student, very mature for his 8 or 9 years, said he needs to improve his organization when he writes. Another student said he plans to press F7 to spell-check his work.

Black mingled with the students, teachers, and principal of PS 626, and spoke a little about her own action plan.

“I would expect that most of what we will be doing is to continue with a sense of urgency and completion about the reforms,” said Black, who plans to continue with the initiatives began by her predecessor, Joel Klein.

During Klein’s eight years as chancellor, he shut down many low-performing schools and replaced them with smaller, charter schools. He also placed a great emphasis on standardized testing and school evaluations, awarding schools a letter grade from A to F.

Some have criticized Klein’s reforms, saying children are too often taught to pass the tests rather than to gain useful and lasting knowledge. Some also say the evaluations of teachers, schools, and students do not accurately reflect the quality of their performance.

“We don’t want to be teaching for the tests,” said Black, “but we want to have testing and evaluations that both incorporate teacher evaluations, that include the curriculum, and all of those things—it has to be a holistic approach to learning.”

Black declared her support for the Common Core State Standards (CCSS) established in July 2010 by the Council of Chief State School Officers (CCSSO) and the National Governors Association Center for Best Practices. CCSS sets principles for teaching core subjects based on methods used by top-performing schools across the globe. It focuses on looking ahead to college and workplace expectations, according to the New York State Education website.

Though Black has been touted as an innovative thinker with managerial skills, it is too early to tell how she is putting those skills to work. She said she’ll develop her plans more in the weeks to come. She also said she has no plan at this time for changing the management or organization of the schools system.

“I think we’re off on a really great path, and I expect to continue it,” said Black.

Black made it clear that dedicated teachers and principals are what she sees as the number one resource in the education system.

After Black left, Forcer gave her opinion on Black.

“I believe in giving everybody a chance,” said Forcer, “Everything is a learning process.”

Forcer said she is waiting to see what Black’s plans are for children that are not on level and for fostering accelerated children.

“She seems to be very personable,” reported principal Joletha Ferguson, who chatted with Black about the restlessness of kids on the first day back from holidays. Black compared it to her own teenaged children, who do not attend public school.

“She seems to believe in what we believe in terms of student achievement, and I believe that the innovations that are already in place, she will continue,” said Ferguson.

Ferguson said she urges Black to listen with an open mind to parents and educators to inform her future decisions. She sees Black’s biggest challenge as working with a limited budget, and Mayor Bloomberg agrees.

“She’s going to have to deal with the budget we can afford and I think the big unknown is what’s going to happen in Albany. The new governor has his work cut out for him,” said Bloomberg, who accompanied his chosen chancellor to PS 626 on Monday.

Bloomberg noted that $800 million in stimulus funds that were available last year would be sorely missed in Fiscal Year 2011. Cuts to the Department of Education’s budget have already been felt by schools, and Ferguson noted, “We’ve learned to do a lot for a little.”

A lone protester, Kenneth Davis, stood outside of PS626. He said with schools tightening their belts, the extra salary paid out for Deputy Chancellor Shael Polakow-Suransky is a travesty. Polakow-Suransky, who holds the educational credentials Black lacks, was appointed to augment her understanding of the schools system. Davis has a son and daughter in the public school system and said he is concerned about Black’s lack of experience.

“I think [more protesters were not there] mostly because people didn’t know where she [Black] was going to be,” said Lupé Todd, spokesperson for Assemblyman Hakeem Jeffries, who is one of the parents involved in petition contesting Black’s appointment that was denied by Justice Connolly.

Attorney Norman Seigal, who represents parents and teachers who opposed Black’s appointment, said he will meet with his clients Wednesday evening to discuss their course of action. For now, the issue seems to have lost some momentum.

“I think the decision is floored. The timing is difficult now because she is the chancellor,” said Seigal.