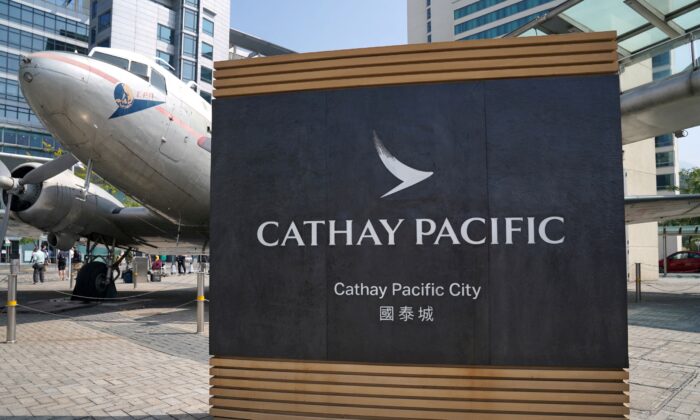 A sign of Cathay Pacific is seen at its headquarters Cathay City in Hong Kong, China, on Oct. 21, 2020. (Lam Yik/Reuters)
Hong Kong

Hong Kong’s Cathay Pacific Airways Ltd. said on Monday that it expected to resume burning cash because of stricter crew quarantine measures after flagging a surprise profit in the second half of 2021 due to cost cuts and a strong cargo market.

The full-year forecast was also narrower than the first-half loss of HK$7.57 billion ($972 million), with Cathay pointing to positive cashflow generation in the second half.

However, the airline forecast it would burn through HK$1 billion ($128 million) to HK$1.5 billion ($192.6 million) of cash a month starting in February after the government tightened crew quarantine restrictions, forcing the airline to cut cargo and passenger capacity sharply.

Rival Singapore Airlines Ltd., which also lacks a domestic market but has less-strict travel rules, forecasts it will reach 47 percent and 45 percent of pre-COVID passenger capacity in January and February respectively.

The schedules listed on Cathay’s website for February and March appear about as light as January, with only a handful of flights per month to destinations such as London, Sydney, and Tokyo that had multiple daily flights before the pandemic. Flights to mainland China are less affected.

“Until conditions improve, we are doing everything in our power to maximise capacity, and estimate that mitigation measures to increase crew resources will enable us to operate approximately an additional 5 percent more cargo flight capacity than we are currently operating,” Cathay Chief Executive Augustus Tang said in a statement.

Hong Kong has suspended transit flights from most of the world.

The two have since been fired, arrested and charged over the breaches.