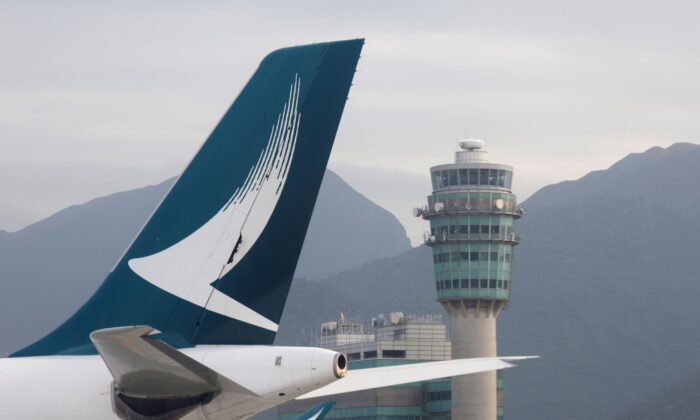 The tail of a Cathay Pacific jet in front of an air traffic control tower at the Hong Kong International Airport on Oct. 24, 2020. (Tyrone Siu//Reuters)
Asia & Pacific

Cathay Pacific has fired three cargo pilots who were infected with COVID-19 during a layover in Frankfurt, Germany, citing a “serious breach” of crew requirements while overseas as the primary basis for their dismissal.

The Hong Kong flagship airline said in a statement on Nov. 18 that “the individuals concerned are no longer employed” with the company after an internal investigation revealed that they were involved in a “serious breach” of procedures during “overseas layovers”.

The airline did not specify the nature of the breach.

Two of the pilots, aged 29 and 57, were tested positive on Nov. 10. Four days later, the third pilot, aged 53, was confirmed infected with COVID-19, the disease caused by the CCP (Chinese Communist Party) virus, commonly known as the novel coronavirus.

All three of them stayed at the same hotel, according to the South China Morning Post.

More than 150 Cathay Pacific employees, plus a larger number of household members and community contacts, were taken to a government quarantine facility in Hong Kong for three weeks after the infections were discovered.

While there have been few local infections in Hong Kong in recent months, the city’s authorities have strictly enforced quarantine regulations, which follow Beijing’s lead in maintaining strict travel restrictions.

After the pilots tested positive for COVID-19, the airline has stepped up compliance checks at international airports to ensure that health and safety regulations are followed during layovers.

“Specifically, we will issue further guidelines to strengthen the requirements over aircrew’s movements in the local community during their medical surveillance periods,” it said in a statement on Nov. 12.

All of Cathay’s aircrew have been vaccinated and are tested frequently for the CCP virus. The airline also requires all eligible aircrew to receive a third dose of vaccine.

Hong Kong’s Transport and Housing Bureau (THB) has also issued a statement expressing disappointment with the latest development, directing the airline to follow up on the matter and “make the best endeavours” to prevent similar incidents from occurring in the future.

“The THB is deeply regretful of and can hardly accept the concerned cargo crew’s non-compliance with the requirements of closed-loop operation during their layover at the outport concerned,” it said.