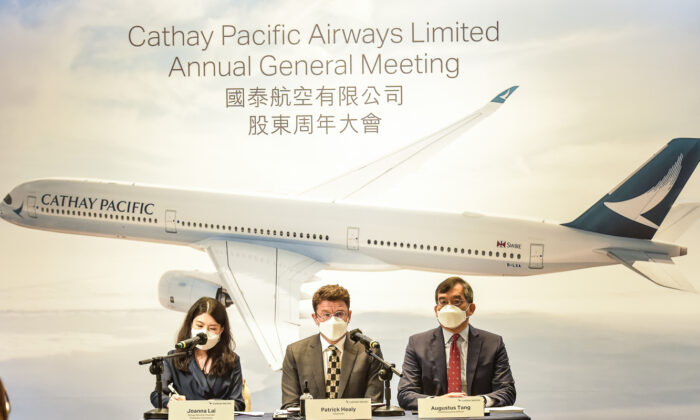 Cathay Pacific Airways AGM in Hong Kong on May 11, 2022. Cathay slumped to a record loss in 2021 and cut back jobs. In the 2022 airline rankings, it has dropped out of the top ten airlines in the latest airline rankings and is now in 11th place. (Bill Cox/The Epoch Times)
HK Current Affairs

An airline website that provides ratings for airlines worldwide recently released the results of the “World’s Best Airlines for 2022.”

Qatar Airways again captured the top spot in the Best Airlines for 2022, followed by Air New Zealand. The rating of Cathay Pacific Airways has dropped significantly from being the sixth last year to the eleventh this year. It means Cathay Pacific Airways is no longer ranked as one of the top 10 best airlines in the world.

Airlineratings.com has a unique 7-star rating scheme that provides ratings for more than 380 airlines worldwide. The scores come from analysis and comparison of customer satisfaction from first class, business class, deluxe economy, and economy class. Airlines can also get extra points for their innovation and value of service.

Other considerations of being the world’s best airline include passenger reviews, fleet age, profitability, and long-term competitiveness.

According to Airlinerating.com, Qatar Airways and Air New Zealand again triumphed in first and second place on the list. Etihad Airways jumped dramatically from the 20th in 2021 to 3rd in 2022. The 4th spot went to Korean Air, which was not in the top 20 in 2021. But today, Korean Air has become the best airline in Asia.

Hong Kong’s major airline has always been a competitor with Singapore Airlines, which dropped down two spots to 5th in 2022.

Unexpectedly, Cathay Pacific Airways has been kicked out of the top 10 best airlines in 2022.

Pro-government airline Cathay Pacific has suffered severe setbacks in recent years due to the political and economic situations in Hong Kong. During the Hong Kong protests from 2019 to 2020, Cathay Pacific was displeased that some of its employees participated in the demonstrations, especially the ones at the Hong Kong International Airport. The company also fired and penalized those involved with local protests.

The Chinese Communist Party (CCP), a Cathay Pacific shareholder, ordered the company to terminate any employee participating in the protests. Not long after the airline received the order, Cathay Pacific changed its previous relaxed off-duty staff policy and fired a pilot who was arrested during a protest. Former CEO Rupert Hogg resigned due to intense criticism from the Chinese authorities for the airline’s staff participating in the protests.

At number 11, Cathay Pacific Airways is lower than Taiwan’s Eva Air which stands in 8th place.

It has just been announced that Cathay is going to return mothballed aircraft back into service and is planning to increase staff numbers again, so maybe it sees better times ahead.

None of the numerous airlines in China made it to the top 20 list.