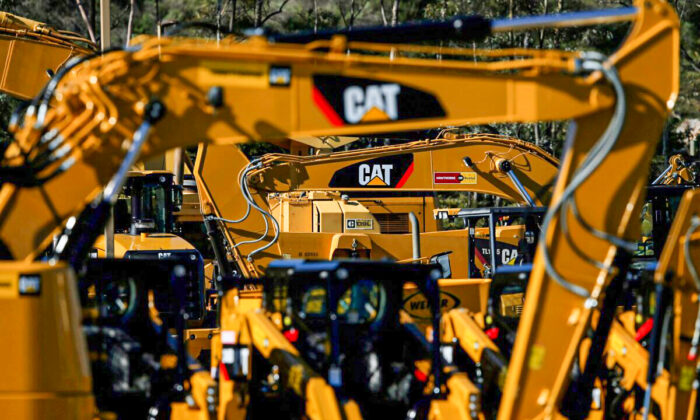 Caterpillar Inc. equipment is on display for sale at a retail site in San Diego, Calif., on March 3, 2017. (Mike Blake/Reuters)
Companies

Caterpillar Inc. said on Thursday that inflation may force it to further hike prices across the board as the manufacturer tries to navigate through production delays that resulted in the company’s first revenue miss this year.

“This has been the first quarter where it (supply chain challenges) started to impact us significantly,” Chief Financial Officer Andrew Bonfield told Reuters, adding that the company had not experienced any shutdowns yet.

Global supply chain disruptions triggered by the pandemic and inflationary cost pressures have already hit the company’s earnings, forcing it to raise equipment prices twice this year to mitigate the blow.

When asked about the impact on demand due to further price hikes, Bonfield said he believed the increases were “sustainable within the market” due to “very strong” customer demand.

In a bid to smoothen production, the world’s largest heavy-duty equipment maker said it was trying to prioritize and route raw material and components to where it was needed the most. The company did not elaborate further.

Caterpillar also warned of a lower adjusted operating profit margin in the current quarter, compared with the third, though it expects sales to improve.

The Deerfield, Illinois-based firm’s sales have surged for three consecutive quarters as construction demand worldwide has been propped up by an unprecedented level of public spending. Rising oil and commodity prices have also helped.

Sales from Caterpillar’s construction industries business, its largest, rose 30 percent, while sales at its energy and transportation unit jumped 22 percent.

The company’s adjusted profit rose to $2.66 per share in the third quarter, beating estimates of $2.20, according to Refinitiv data. Caterpillar’s shares rose 3 percent and were the biggest boost to the Dow Jones Industrial Average index.