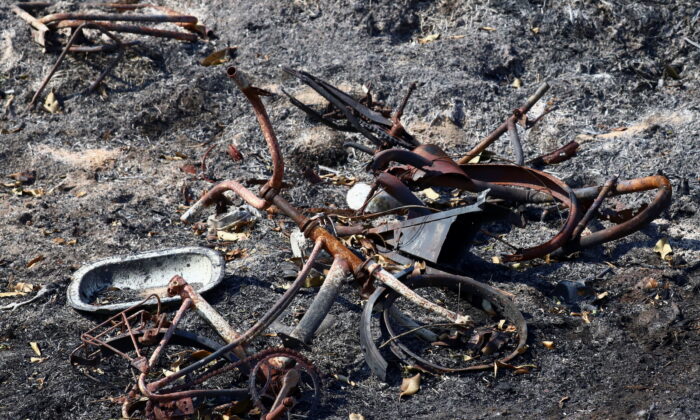 Destroyed bicylces lie on charred earth after a wildfire in a region hit by drought and high temperatures, near Santo Tome, province of Corrientes, Argentina, on Feb. 21, 2022. (Matias Baglietto/Reuters)
Americas

ITUZAINGÓ, Argentina—Luis Candia is battling to put out raging wildfires in Argentina’s northern Corrientes province, which have scarred the region burning over 800,000 hectares of land, more than twice the size of Rhode Island.

With a water pack on his back and his face covered to protect him from the smoke and flames, the volunteer who joined firefighting teams told Reuters that the region that borders with Paraguay was fighting for its future.

“The truth is that the province is experiencing a catastrophe with these fires,” he said, taking a break from trying to douse blazes which have burned farming regions and wetland areas rich with wildlife.

“There is a lot of loss of animals, the issue of flora and fauna. On top of that, this was our source of work. If we lose this, what will become of us tomorrow?” he said.

Images from the area show large swathes of fields burned, smoldering roots of trees, animals fleeing the fire or dead, and exhausted firefighters.

Firefighters, police, and volunteers have been trying to put out the fires for weeks, which have taken hold amid drought linked to the La Niña climate phenomenon. They have burned a significant proportion of the province.

“Everything came together: the drought of a year and a half, the high temperatures, the lack of rain, and the hydric stress that the plants already have, even the soil itself,” Josefina Piñeiro, a resident of the area, told Reuters.