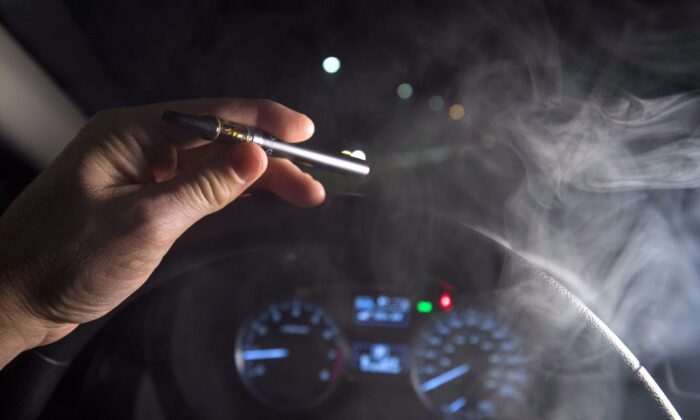 Smoke from a cannabis oil vaporizer is seen as the driver is behind the wheel of a car in North Vancouver, B.C., on Nov. 14, 2018. (Jonathan Hayward/The Canadian Press)
Canada

Cases of drug-impaired driving continued to rise for the fourth consecutive year since the Liberal government legalized marijuana in October 2018, according to police data collated by Statistics Canada.

In 2019, 6,453 such incidents were reported—a 43 percent increase over 2018, the Canadian Centre for Justice and Community Safety Statistics, a department at Statistics Canada, said in its 2019 study released last July.

The latest study, first reported on by Blacklock’s Reporter on Aug. 3, also noted that other marijuana crimes increased last year.

“Nationally, the total rate of police-reported cannabis offences under the Cannabis Act and Controlled Drugs and Substances Act increased for the first time in 9 years, rising 5 [percent] in 2021,” the study said.

The police reported 13,560 cases of cannabis offences in total, with most involving illegal imports and exports of marijuana, the study said.

In April 2017, the Liberal government introduced Bill C-46, an act to amend the Criminal Code that sought to strengthen “the criminal response to drug-impaired driving in anticipation of cannabis legalization.”

The impact of the legalization of cannabis on impaired driving incidents was probed by Senator Denise Batters, who asked Yvan Clermont, then-director of StatCan’s Centre for Justice Statistics, if he had any estimates when he testified before the Standing Senate Committee on Legal and Constitutional Affairs in February 2018.

“Depending on how legalization is sorted, in terms of campaigns and everything, I don’t know that. And things will differ from one jurisdiction to another. I cannot predict,” Clermont said.

“We have not asked that,” replied Clermont.

In March, Public Safety Canada released a report saying marijuana was a “major contributor” to people dying in car accidents.

“Drug-impaired driving is a major contributor to fatal road crashes, and young people continue to be the largest group of drivers who die in crashes and test positive for drugs,” said the report, titled “Public Opinion Research On Drug-Impaired Driving.”

“Among those who have operated a vehicle while under the influence of cannabis, most said they did not recognize their behaviour as risky, with two in five (39 percent) reporting they did not feel impaired and one in five (23 percent) believing they could (still) drive carefully.”

The report noted 26 percent of cannabis users have “operated a vehicle while under the influence.”