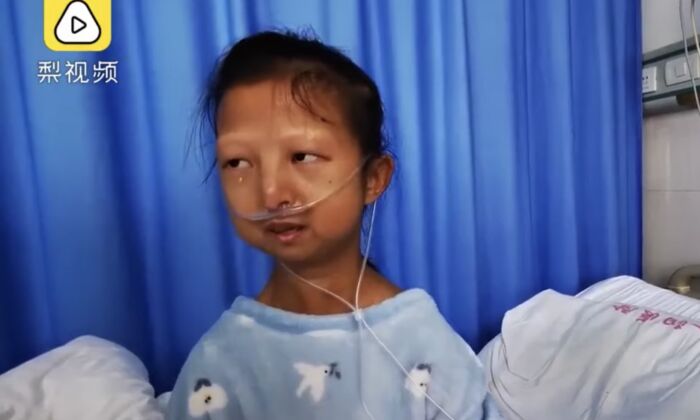 Wu Huayan is talking about her life at a hospital in Guiyang city of southwestern China's Guizhou province in Oct. 2019. (Screenshot)
By Nicole Hao

The death of a 24-year-old Chinese woman on Jan. 13 because of severe malnutrition is sparking widespread outrage against officials for failing to address persistent extreme poverty in the country.

Weighing 47 pounds and standing at 4 feet, 5 inches tall, Wu Huayan suffered from stunted growth and a host of health problems; she often couldn’t afford her meals.

In October 2019, after Wu was diagnosed with heart disease, she appealed to the public for help to pay for an urgent operation via a crowdsourcing platform. While a charity foundation run by a central government ministry raised money on her behalf, her family said they received just a fraction of the money, local media reported. Many netizens suspect government malfeasance.

Ironically, just a day before her death, the central government released a documentary about an official from the province where Wu lived, Wang Xiaoguang, who was convicted of corruption. Wang, a former vice governor of Guizhou Province, was sentenced to 20 years imprisonment and a fine of 173.5 million yuan ($25.18 million) in April 2019 for embezzlement and bribery crimes.

“My grandma and my father died because we had no money to cure their diseases. I don’t want to experience again the feeling of waiting for death because of poverty,” Wu wrote on Shuidichou, a GoFundMe-like platform in China, on Oct. 17, 2019.

Her story spread quickly in China; dozens of Chinese media interviewed her and published her backstory.

Wu, who was from a small village in Songtao county, Tongren city, had been a junior studying at a local vocational institute when she died.

When Wu was 4 years old, her mom died suddenly from an unknown disease, Chinese media reported. The little girl lived in poverty together with her grandmother, father, and younger brother.

While Wu was in high school, her father was diagnosed with cirrhosis. Without money to pay for treatment, he died after half a year. Soon after, Wu’s grandmother also died from a chronic illness.

As teenage orphans, Wu and her brother moved to their uncle’s house. The local county paid them 300 yuan ($43.50) per month as part of a national “poverty relief” program.

“During the most difficult times, I only had one steamed bun every day. … Because pickled chiles were cheap, I mixed it with plain rice as my meal. I ate this for five years,” Wu said in a media interview.

When Wu was a senior in high school, the malnutrition caused her to begin losing her hair; soon, she lost her eyebrows. At the same time, her brother was diagnosed with psychosis.

“My younger brother suddenly started to speak nonsense … he didn’t recognize who I was,” Wu said in a media interview. “But I couldn’t give up because he is my only family in this world.”

Wu and her uncle borrowed 5,000 yuan ($725.60) to be able to send her brother to the hospital. After more than a year of treatment, his condition stabilized and he was allowed to go home.

Meanwhile, Wu couldn’t afford to go to the doctor herself.

When a high school classmate visited her at the college, she found Wu had developed severe edema in her feet. Worried about Wu’s health, the classmate took her to the hospital, where it was discovered that three of Wu’s four heart valves were damaged.

The China Charities Aid Foundation for Children, a subsidiary of the national government’s Civil Affairs Ministry, began asking for donations on Wu’s behalf on Oct. 25, 2019.

Ultimately, doctors said they couldn’t operate because Wu was too weak to withstand the procedure. She died at the hospital.

The foundation made a public response about Wu’s case on Jan. 14, explaining that the fundraising platform it operates charges 6 percent for handling fees, adding that disbursement of the remaining amount of donations will be discussed with Wu’s family.

This isn’t the first time the foundation has faced scrutiny.

In December 2012, Chinese citizen Zhou Xiaoyun obtained a copy of the foundation’s annual report after submitting a legal request, according to a report by state-run Beijing News. Zhou found that the foundation had on one occasion spent 4.84 billion yuan ($702.4 million)—far higher than the 80 million yuan ($11.6 million) total donations it collected that year.

Beijing News tracked down the foundation’s accountant, who claimed that she mistakenly input an extra zero. The foundation didn’t provide any further explanation.