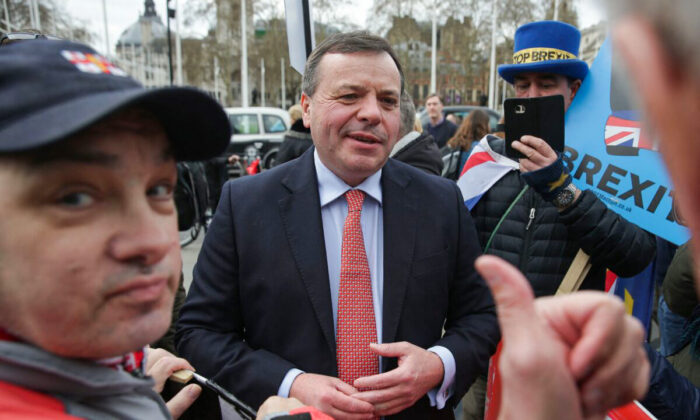 British businessman and co-founder of Leave.EU campaign, Arron Banks interacts with demonstrators near the Houses of Parliament in central London on March 27, 2019. (Daniel Leal/AFP via Getty Images)
UK

British investigative journalist Carole Cadwalladr has won a libel battle with Brexit supporter and businessman Arron Banks, despite being unable to prove what she claimed about him was true.

Banks, one of the biggest donors towards the Leave.EU campaign during the 2016 Brexit referendum, sued freelance journalist Cadwalladr, who writes for The Observer, after she made comments about him during a TED Talk in April 2019 and then repeated the claim in a Twitter post two months later.

During the TED Talk—which more than 5 million people have watched—Cadwalladr referred to “lies” she said Banks had told “about his covert relationship with the Russian government.”

The UK’s High Court determined the meaning of what she had said to be: “On more than one occasion Mr Banks told untruths about a secret relationship he had with the Russian government in relation to acceptance of foreign funding of electoral campaigns in breach of the law on such funding.”

Banks said what Cadwalladr had stated was “false and defamatory” and sought to remove the TED Talk, which is still available to view online.

Under libel law in England a defendant is usually required to prove what they said was true.

But Cadwalladr dropped her original claim that the statement was true and instead used a “public interest” defence.

On Monday High Court Judge Mrs. Justice Steyn ruled in Cadwalladr’s favour and said she had a “reasonable belief” what she said was was true and it was “in the public interest” for her to air her claim.

In Steyn’s judgement she said she believed Banks had not suffered any serious harm to his reputation as a result of the claim made by Cadwalladr.

Steyn said she “accepted that, for the most part, Mr Banks’s evidence was truthful, and in particular his evidence on the issue of serious harm was open, honest and entailed no exaggeration. But there were aspects of his evidence in relation to the public interest defence that [she] found to be evasive and lacking in candour.”

Cadwalladr has investigated the funding of the pro-Brexit referendum campaigns and alleged misuse of data by Cambridge Analytics.

After the judgement was delivered, Cadwalladr, who crowdfunded her legal fees, wrote on Twitter: “I am so profoundly grateful & relieved. Thank you to the judge, my stellar legal team & the 29,000 people who contributed to my legal defence fund. I literally couldn’t have done it without you.”

Banks replied, also on Twitter: “Congratulations to Carole on winning today, it leaves open for the journalist the excuse that she thought what she said was correct even though she had no facts. There are important points of law at stake here and we will likely appeal.”