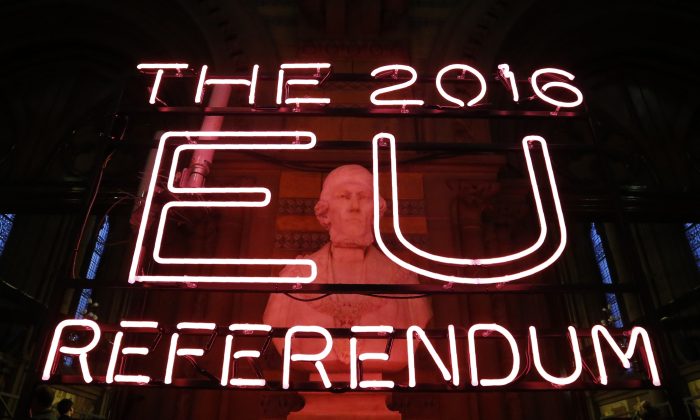 A neon sign for the 2016 referendum is attached to the doors of the announcement hall in Manchester Town Hall, northwest England, on June 23, 2016. (Rob Stothard/AFP/Getty Images)
Special

Breaking Down Brexit: How the UK Voted

So ends the most bitter and polarizing experience of British electoral democracy. The economics of Brexit was heatedly and endlessly debated in the U.K.’s referendum campaign on EU membership, but ultimately it was trumped by voters’ considerations about national integrity and identity. A majority of 17.4 million people voted to leave, against 16.1 million for remain.

How the Drama Unfolded

Assiduous watchers of the early referendum results had been advised that if the outcome in Sunderland (perennially among the first to declare election results) showed anything more than a six-point winning margin for Leave, then Brexit would be the likely outcome nationally. Anything less, however, and Remain could expect overall victory.

In the event, Sunderland produced a remarkable 22-point margin in favor of Leave (61-39), while nearby Newcastle, which had been expected to produce a comfortable margin for Remain, only narrowly favored the pro-EU choice (51 percent to 49 percent). The value of sterling fell off a cliff as the currency markets reacted to these early shocks, but the Remain side’s nerves were briefly steadied a little by better than predicted results in Swindon and Lewisham.

But the bad news for Remain continued to pile up, as a pattern of polarization emerged, with Leave areas proving even more hostile to the EU than had been expected, especially in the north, eastern England and Wales, and Remain areas being more supportive, at least in parts of London.

At 72 percent, turnout was extraordinarily high by the standards of recent general elections, but especially in the pro-Leave areas. Appalling weather on the day may have depressed turnout in London, while the other major pro-Leave zone, Scotland, saw a lower than average turnout as well—67 percent. By 2 a.m., quantitative forecasters were giving Remain a negligible chance of winning, and predicting 56 percent for Leave, while the bookies now made the Brexit side favorites to win.

By 2.30 a.m. there were glimmers of renewed hope for the increasingly despondent Remain campaign with the first results coming in from London—a massive 79 percent pro-Remain vote from Lambeth, followed shortly after by a 75 percent pro-Remain vote in Wandsworth, and 70 percent in Hammersmith and Fulham. This was enough to put Remain in the lead once again, yet only fleetingly.

Ultimately these pockets of pro-European sentiment were not enough and by 5.30 a.m. the outcome was confirmed: the U.K. had voted to leave the EU.

The final figures showed a 52 percent–48 percent winning majority on a 72 percent turnout. Voters had understood that this was a more existential question than a mere general election and mobilized in greater numbers than had been their wont for nearly two decades.

Obama and NATO Respond to Britain’s Decision to Leave EU

In demographic terms, the Remain and Brexit camps have been well defined for some time. Support for Brexit resembles that for UKIP in various ways, with particular strengths among older people, lower social class and less well educated voters. In YouGov’s last referendum poll conducted on the day of the vote itself, Leave seemed to enjoy commanding leads among voters aged over 50, and those whose highest educational qualification was GCSE or lower. Remain was the clear preference of those aged 18–49 and those educated to A-Level or degree standard.

While Remain voters were primarily motivated by concerns about the economy and what was in the best interests of their families, Leave supporters were chiefly driven by the desire to enhance the U.K.’s ability to act independently of other countries and to deal with the issue of immigration. The country split quite neatly into those for whom pocketbook considerations were paramount (and who opted for Remain) and those who sought to protect national integrity and identity (and who chose to Leave).

The polarization of the U.K. is now sharply apparent in geographical terms. The vote for Brexit was strongest in a swathe of areas running down the east of England, especially in parts of Lincolnshire, Essex and the East Midlands, while London, Scotland and Northern Ireland remain the outposts of pro-EU sentiment. With Wales also voting for Leave, the electoral picture shows a nation divided.

Beyond the U.K. (or what will eventually be left of it) the ramifications will be felt with great resonance: populists in France, Italy and the Netherlands have demanded their own national referendum on EU membership. Closer to home, relations between two Irelands, one in the EU and one outside it, will bring further complexity to that island’s convoluted and troubled politics. This one will run and run.

Paul Webb is a professor of politics at the University of Sussex in the U.K. This article was originally published on The Conversation.