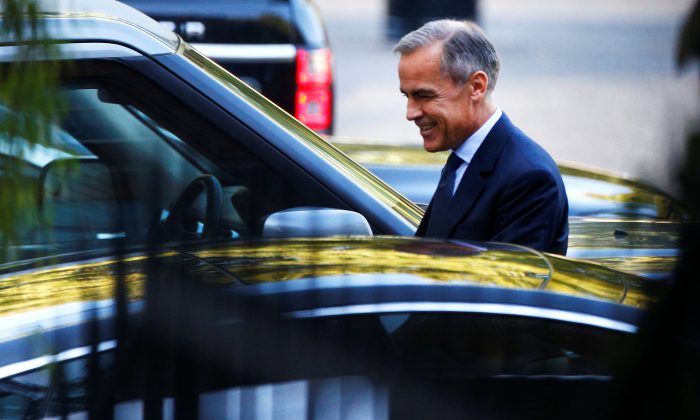 The United Kingdom is due to leave the European Union on March 29, and yet little is clear. There is, so far, no full exit agreement between Brussels and London and some rebels in Prime Minister Theresa May’s Conservative Party have threatened to vote down a deal if she clinches one.

Details of Carney’s briefing to the cabinet were reported by British newspapers including the Financial Times on Sept. 13, The Times, and the Guardian. The Bank of England declined to comment and the exact context of Carney’s remarks is unclear.

According to The Guardian, Carney warned the ministers, including May, that the impact of a chaotic no-deal Brexit could be as catastrophic as the 2008 financial crisis.

Speaking at the Irish central bank on Sept. 14, Carney did not directly address the media reports but reiterated that the BoE had tested banks against “very severe” scenarios including “dramatic house price falls” and much higher interest rates.

“That’s not a prediction of what’s going to happen, but that (stress testing) is what we need to do in order to make sure that … the system is … able to continue to lend,” he said. “Our job, after all, is not to hope for the best but to plan for the worst.”

The BoE has long said its bank stress tests represent worst-case scenarios rather than forecasts of likely outcomes.

Many business chiefs and investors fear politics could get in the way of Brexit, thrusting the world’s fifth largest economy into a “no-deal” divorce they say would weaken the West, spook financial markets and clog up the arteries of trade.

Brexit Secretary Dominic Raab was due to speak by phone to EU chief negotiator Michel Barnier on Sept. 14.

In recent months, May’s government has stepped up planning for a no-deal Brexit and has underscored the disruption that such a move would cause to businesses and the public.

Without a deal, the UK would move from seamless trade with the rest of the EU to customs arrangements set by the World Trade Organization for external states with no preferential deals.

In one note of optimism, Carney said that if May struck a Brexit deal on the basis of her “Chequers” proposals then the economy would outperform current forecasts because it would be better than the bank’s assumed outcome, the FT said.

Carney, whose term of office was this week extended until the end of January 2020 to deal with Brexit disruption, told ministers a chaotic exit would lead to a plunge in sterling that would drive up inflation and interest rates, The Times said.

Further, the Bank of England would be unable to soften the crisis by cutting interest rates because of the inflationary impact of such a move, Carney told ministers, according to the Financial Times.

If Carney’s worst-case scenario were to come to pass then such a crash in house prices would spell political death for any prime minister, though there was scepticism about the reports from his opponents and some economists.

“Carney has made himself a laughing stock in the City with such an outrageous warning,” said Richard Tice, a Brexit supporter who is co-chair of the “Leave Means Leave” group.

“Carney is a political central banker who is talking down the country and talking down Brexit in the hope that people accept a really bad Brexit deal – May’s Chequers deal.”

Carney, sometimes nicknamed the “unreliable boyfriend” due to mixed signals about the future path of interest rates, gained respect from some investors for his actions to calm markets in the immediate aftermath of the 2016 Brexit vote.

Britain’s central bank stress-tested lenders against a 33 percent house price fall last year and some economists questioned whether Carney’s comments to ministers had been reported accurately.

“Carney reported comments on UK house prices not remotely credible BUT I also think highly unlikely they were made as reported,” said Simon French, chief economist at Panmure Gordon merchant bank in London.

UK house prices fell 19 percent peak to trough during the 2008 financial crisis but then rose by 38 percent from their low in March 2009 to June 2016, the month of the shock Brexit referendum result.