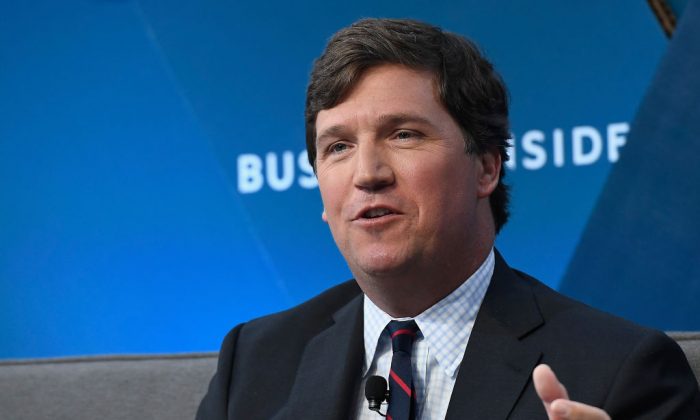 Carlson’s Criticism of US Military Policy Was Intended to Help

“Secretary of Defense Lloyd Austin expressed his ‘revulsion’ after Carlson questioned the role of women in combat. Keeping women mostly out of combat has been the U.S. military’s centuries-old orthodoxy until just a few years ago,” Hanson notes.

My regard for the United States military is high, and I’m grateful for its continuing protection of my country, Canada. During the Cold War, Canada fell under the nuclear and conventional forces umbrella of NATO. Now, we still have trouble finding the will and finances to procure military hardware, and our three main branches are weak, compared to their power while helping to defeat the Axis enemies from 1939 to 1945, when women played auxiliary roles—important roles, but they were not in combat. Today they can be. And today, Canada still depends on our American friends for protection.

My esteem for the American soldier and airman was burnished by tales from my late uncle, who fought beside U.S. forces under the great Ranger Commander William Orlando Darby for many weeks in the Italian Campaign in 1944. My late father flew in the war and worked with American pilots, including Wing Commander Joe McCarthy of Dam Buster fame, in the 1950s, while training pilots for service in Europe. Both smiled and became animated when sharing exploits of their U.S. colleagues, whom they spoke of with admiration.

My own service as a war reporter allowed me to witness the determination of U.S. soldiers in Kosovo in February 2000 to protect the Muslim Albanians from their Serbian enemies. One U.S. base was called Checkpoint Apocalypse, close to the village of Dobrosin. Days earlier, Serb soldiers had entered Dobrosin and executed at least two people.

When I spoke to Sgt. First Class Brad Houston from that U.S. base, four scruffy and sullen children from Dobrosin approached us. They were gaunt and unsmiling, I noted in my book “My Dear Boy,” and soldier Houston—about 24, fresh-faced and sincere—took it to heart.

“For me, when you look into the eyes of these little guys, you realize they’re the ones who suffer most,” he told me. “Probably the biggest thing that hits home is the poverty level.” I watched as Sgt. Houston shared treats with the children, and their faces lit up.

And so it is with caution that I find myself questioning Secretary of Defense Lloyd Austin now. Yet if a friend cannot speak frankly, then who rightly can? His criticism of Carlson is unfortunate, and perhaps was expressed in the heat of the moment. Carlson is many things—a patriot, an intelligent and insightful TV commentator, a defender of traditional values, and a man alert to the threats posed by woke thinking, which is to say liberal and progressive thinking that threatens the integrity of our most cherished institutions, including education, free speech, and the military.

And so for the secretary of defense to liken him to an enemy, as Hanson has pointed out, or to suggest Carlson is unfit to criticize policy, is a charge to which defenders of military tradition and free speech must respond.

I watched that day as Tucker related his concerns about the recent relaxation of military standards, including fitness tests. He also has concerns about transgender issues in the military and the possible overall diminishment of its quality in the face of an increasingly bellicose and belligerent China. These are valid concerns, ones shared by many millions of people in the United States, Canada, Europe, Australia, New Zealand, India, Japan, and other countries who depend on the power of the United States to defend democracy and the rule of law in the world. Our freedoms and our lifestyles are at stake.

The Chinese Communist Party, which rules with an iron fist some 1.3 billion inhabitants (they are not “citizens” in the sense that we understand the word) of China, has taken clear and ominous steps to challenge the United States as the world’s leading military and industrial power.

The same deterrent that kept the peace between the United States and the USSR in the bi-polar world remains basic to continued peace today. That deterrence depends on two foundations: One is America’s predominance in the field of nuclear weaponry; the other is China’s understanding that even in conventional warfare, the American soldier is every bit a match for his or her Chinese counterpart.

Should China’s autocrats come to believe that America has weakened its armies by compromising standards to placate the shrill whine of progressives—whose campaign China is financing—then the threat of military action by China increases.

Yet that is exactly, as I understand it, the essence of Carlson’s concern.

So let’s be hard-headed on defense matters. The United States must not signal even a suggestion that its forces are in decline. Peace is in the balance.

Brad Bird is a conservative commentator and an award-winning journalist based in British Columbia. A war correspondent in Kosovo, Western Sahara, eastern Ukraine and elsewhere, he has written or edited five books, including the family history “My Dear Boy: A family’s wartime letters and memoirs from 1915 to the Kosovo Conflict” and “Nickel Trip” about his father’s military service.