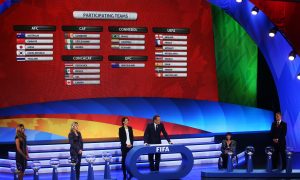 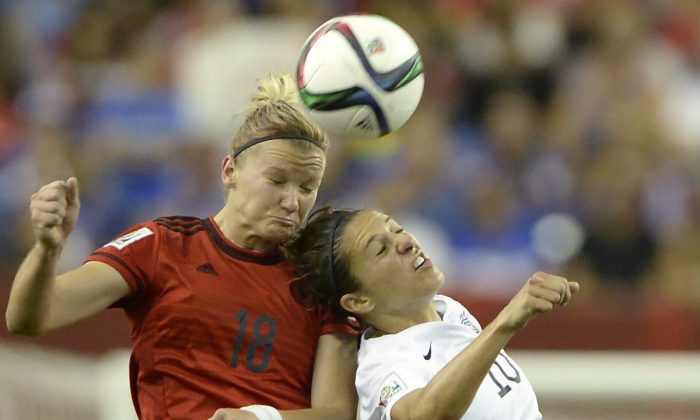 MONTREAL—Carli Lloyd did what a captain is supposed to do in the big moments.

The U.S. captain converted a penalty and set up Kelley O’Hara’s insurance goal in an outstanding 2–0 Women’s World Cup semifinal victory over top-ranked Germany on Tuesday at Olympic Stadium.

“These are the moments that I live for,” said Lloyd. “I just need to deliver in any way possible.”

It was a Clash of the Titans of women’s football and both sides went full throttle against each other.

But it was the U.S. that more than matched the mighty Germans in physicality and athleticism. The U.S. also had raucous crowd support and Olympic Stadium was adorned in stars and stripes and red, white, and blue. The attendance was a healthy 51,176, heavily in support of USA.

This team has embraced the accountability and responsibility of defending.
— Jill Ellis, USA

“When the crowd was going, it was so incredibly loud. We couldn’t do this without them,” said Lloyd.

The turning point was Germany’s Celia Sasic missing a penalty prior to Lloyd getting her chance, in controversial fashion, from the penalty spot. It all happened in the span of just over five minutes.

Forward Alex Morgan was in full flight when German defender Annike Krahn stepped in to her just at the edge of the 18-yard box. Replays showed initial contact was made outside the 18-yard box, but Romanian referee Teodora Albon immediately pointed to the penalty spot.

“It was clearly outside of the area, and it can be seen quite clearly on television,” German coach Silvia Neid said after the match.

“I think it’s just a part of the game, in terms of the officials,” responded U.S. coach Jill Ellis, who didn’t want to comment on the officials’ performance.

German goalkeeper Nadine Angerer was a bit confused about the call.

“My first reaction: I wanted to build the wall,” Angerer said thinking that it might be a free kick for the U.S. just outside the box.

It is unfortunate that in a game of this magnitude, the main talking point is a penalty call. The human element in football cannot be ignored and it’s just a question of when it will pop up. This time the U.S. was the beneficiary, but Germany will also wonder what could have been had Sasic converted her penalty.

Nevertheless, aside from the penalties, the U.S. was the dominant side and are deserving finalists.

The U.S. tried yet another combination for strikers with Morgan paired with Lloyd who was also player of the game against China in the quarterfinals. The American attack hadn’t been consistent so far and this was the fifth different striker partnership in six games.

But it looked like Ellis had found something that worked as the U.S. played its best attacking football of the tournament. The U.S. was all over the Germans, but Angerer was standing on her head in the early going.

At the end of the first half, the U.S. had more possession (55 percent), more shot attempts, and more corner kicks.

But in the second half, Germany started to get more of a foothold in the game. The top-ranked team won a penalty when Julie Johnston pulled down Alexandra Popp after chesting a ball back toward Hope Solo.

But somehow, and in an uncharacteristically German way, Sasic rolled the ball wide of the goal. After she had put two penalties past France, this was a shocking turn of events.

After Lloyd gave the U.S. the lead and to make sure there would be no German comeback, the U.S. captain created a bit of room in the penalty area in the 84th minute and fed a ball across the goalmouth to an onrushing O’Hara. O’Hara made good on the finish, sealing the deal.

Germany vs. USA brings back the classic offense vs. defense matchup in that the Germans had the tournament’s most potent offense (aided by facing Ivory Coast and Thailand in the group stage), while the Americans have the tournament’s most stingy defense, conceding just one goal in five games prior to the semifinal.

The strength of the U.S. has been the partnership in central defense between Johnston and Becky Sauerbrunn, backstopped by the excellent Solo in goal. And once again, the old adage that “defense wins championships” looks to have held true.

“This team has embraced the accountability and responsibility of defending,” said Ellis. “We knew we had this in us.”

Canada Tops Group at FIFA Women’s World Cup
Favorites Take Charge in FIFA Women’s World Cup
Reaching the World Cup final still hadn’t sunk in yet for Johnston who had another strong match at the heart of the U.S. defense, but for her penalty call. She could have even been sent off for the challenge as Popp would have had a clear path to goal.

“It’s exciting to be a part of a team that’s going to be in the final,” she said. “It’s still pretty surreal.”

The U.S. has finally found its stride after some less-than-convincing performances at the start of the tournament. Their prior best game came against China in the quarterfinals, but there’s no doubting the level of the squad after this semifinal win over Germany.

“We’ve got each other’s backs,” Lloyd said. “It’s a good feeling. I have a really confident feeling in us winning it.”

The U.S. will face the winner of England and Japan, to be played Wednesday in Edmonton. The final takes place at B.C. Place in Vancouver on Sunday.

“It’s going to be a battle whoever it is,” said Lloyd. And she and her teammates know a thing or two about winning battles.