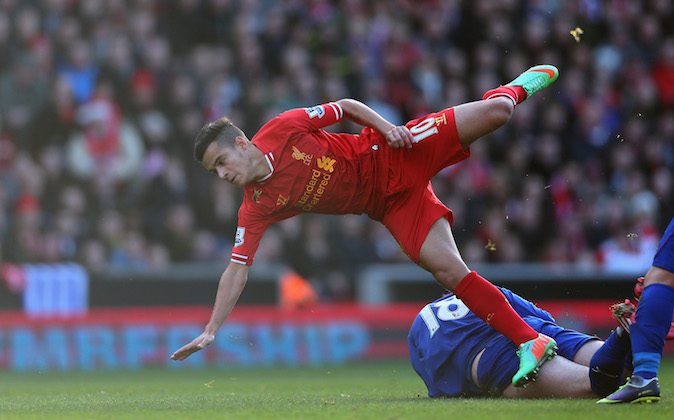 Philippe Coutinho of Liverpool in action during the Barclays Premier League match between Liverpool and Cardiff City at Anfield at Anfield on December 21, 2013 in Liverpool, England. (Photo by Clive Brunskill/Getty Images)
Soccer

The game will be broadcast on radio on TalkSport Radio and BBC Radio 5 Live in the United Kingdom.

Defender Mamadou Sakho (hamstring) should return for Liverpool for this fixture after being out for a spell.

“The focus has been purely on Cardiff City, that’s been our world this week,” he said. “We had a wonderful performance at Old Trafford, but there hasn’t been any talk of the title. We’re just enjoying how we’re playing.

“The run-in for us is the next game. We have tough games right through, starting with a very tough game against Cardiff. We can speak about the run-in when it’s over.”

Cardiff have won 1 and loss 4 of their last five fixtures (LWLLL).

Liverpool have won 4 and loss 1 of their last five games (WWWLW).

Liverpool are heavily favored to win this tie.