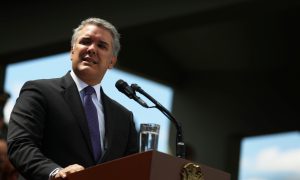 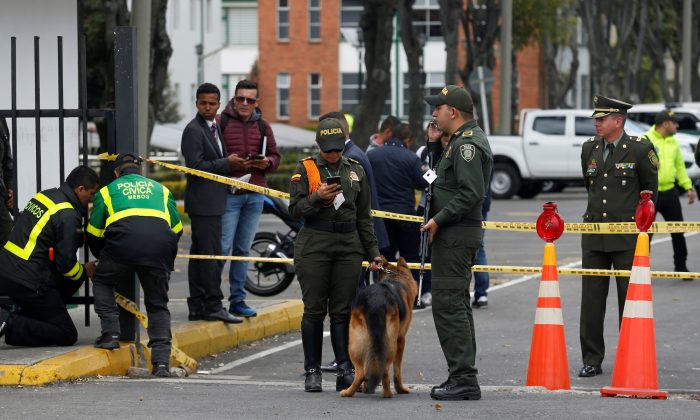 Police work close to the scene where a car bomb exploded, according to authorities, in Bogota, Colombia Jan. 17, 2019. (Reuters/Luisa Gonzalez)
Americas

BOGOTA, Colombia—A car bomb exploded at a police academy in Colombia’s capital Bogota on Jan. 17, killing at least nine people and wounding more than 20, in an attack that prompted fears of a return to the country’s violent past.

According to authorities, the car broke through checkpoints onto the grounds of the General Santander Police Academy in the south of the capital before it exploded, shattering windows of apartments in the vicinity.

President Ivan Duque called the bomb a “crazy terrorist act” against unarmed cadets and said he ordered police and the military to find the perpetrators and bring them to justice.

“Colombians have never yielded to terrorism, we have always defeated it. This will not be an exception,” he told a news conference at the school.

Investigators had identified the car’s driver as Jose Aldemar Rojas Rodriguez, who was among the dead, said Colombia Attorney General Nestor Humberto Martinez. He said the car was carrying 80 kilograms (176 pounds) of the high explosive pentolite, which has been used in the past by Colombia’s rebel guerrilla groups.

There was no immediate claim of responsibility for the attack, and Humberto Martinez said investigators were searching for its “intellectual authors.”

The Defense Ministry said in a statement that nine people were killed and 24 wounded; eight of the deceased were cadets at the academy, police said.

A police helicopter hovered over the area and family members gathered, many crying as they sought information. Images on social media showed the remains of a vehicle in flames in the parking area, and emergency responders at the scene.

Car bombs were frequent in Colombia during decades of civil war between the state and various leftist rebel groups, as well as in violence involving the Medellin drug cartel, led by the late drug lord Pablo Escobar.

The worst of the war, which killed some 260,000 and left millions displaced, ended when the government reached a peace agreement with the Revolutionary Armed Forces of Colombia (FARC) in 2016.

The last major attack was in January 2018, when the biggest leftist rebel group that remains active, the National Liberation Army (ELN), detonated a bomb in the northern port city of Barranquilla, killing five police officers and injuring dozens.