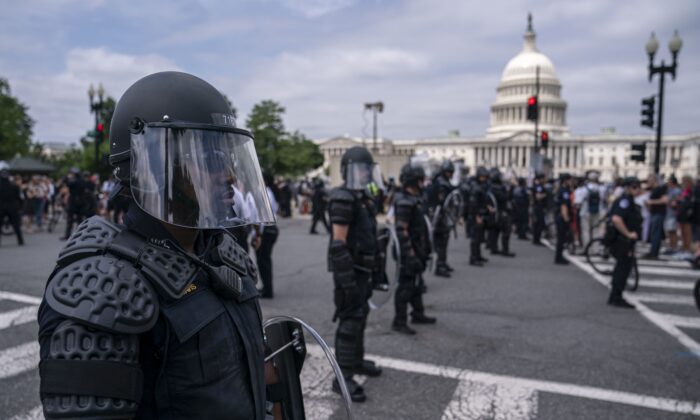 To oversee threats to Congress, trespassing, and wrongdoing among lawmakers
By Katabella Roberts

The Capitol Police is looking to hire its own criminal prosecutor to oversee allegations about individuals who have threatened or been violent toward Members of Congress and their staff.

According to an advertisement for the role, USCP is looking for “a Special Assistant United States Attorney located in USCP District Offices in Washington, D.C.,” who will report to “the USCP Deputy and General Counsel.”

The candidate will also “work under the direct supervision and authority of the co-located District U.S. Attorney’s Office,” according to the ad.

“This position is to represent the United States government primarily prosecuting individuals and/or groups who have engaged in threats and/or acts of violence against Members of Congress, their staffs, United States Capitol Police employees, visitors to the Capitol complex, and facilities and properties within the Capitol Complex,” the job advertisement states.

Other job duties include prosecuting federal crimes as and when needed, developing and recommending strategies, and coordinating the “preparation of litigation for potentially complex federal cases.” The candidate will also work closely with USCP, federal and local law enforcement agents, as well as witnesses, and victims “during criminal investigations, trial preparation, and all phases of litigation” according to the ad.

The role could potentially see the prosecutor working on cases related to the Jan. 6 breach of the U.S. Capitol, the Daily Wire reports, as well as threats to members of Congress, and wrongdoings by lawmakers.

“Work may involve problems of unusual delicacy, such as allegations of wrongdoing against staff or members of Congress, criminal trespass, investigations of threats or crimes against Members of Congress, and arresting or detaining high-profile individuals,” the job posting states.

The vacancy comes after Axios reported that threats against lawmakers increased by 144 percent between 2017 and 2021. That has prompted the House sergeant-at-arms’ office to offer to pay up to $10,000 for security upgrades to lawmakers’ homes.

An additional $150 per month stipend would be provided to help them cover fees and maintain new equipment.

Meanwhile, the investigation into the Jan. 6 breach of the U.S. Capitol is still ongoing and has resulted in the arrest of more than 850 individuals, including over 260 individuals charged with assaulting or impeding law enforcement, according to the Justice Department.

On Monday, a judge sentenced a Texas man who carried a gun onto U.S. Capitol grounds on Jan. 6 to more than seven years in prison.

Following the events of Jan. 6, U.S. Capitol Police Chief Steven Sund resigned, as did former Sergeant at Arms Paul Irving. At the time, House Speaker Nancy Pelosi (D-Calif.) stated that there was a “failure at the top of the Capitol Police” with regard to the incident.

Senate Majority Leader Chuck Schumer (D-N.Y.) also at the time called for Senate Sergeant at Arms Michael Stenger, to vacate his position, stating that if he did not do so in the immediate future, the lawmaker would “fire him as soon as Democrats have a majority in the Senate.”

Speaking of the latest job advertisement on Aug. 2, Mike Davis, former Chief Counsel for Nominations for the Senate Judiciary Committee, said that federal prosecutors can only work for the Executive Branch.

“It is clearly unconstitutional for Congress to have federal prosecutors on its payroll and working for them,” Davis told The Daily Wire, adding that it “violates the separation of powers” and that “federal prosecutors work for the president and the executive branch, and every prosecution by Nancy Pelosi and Chuck Schumer’s army of prosecutors is subject to serious constitutional challenge and reversal by the Supreme Court.”

The Epoch Times has contacted the Capitol Police for comment.

Davis added that prosecutors working for the police sets a dangerous precedent, adding: “This is a desperate power grab by Pelosi and Schumer to keep their bogus January 6 narrative going forever.”

A Capitol Police spokesperson told The Daily Wire that the role of a criminal prosecutor for USCP was not suggested by any member of Congress.

“Hiring a Special Assistant U.S. Attorney will give the Department, which has a constitutional duty to protect Congress and the Capitol Complex, a prosecutor who will work for the Department of Justice, but will also be an expert in the way we work and the types of unique threat cases we have.”