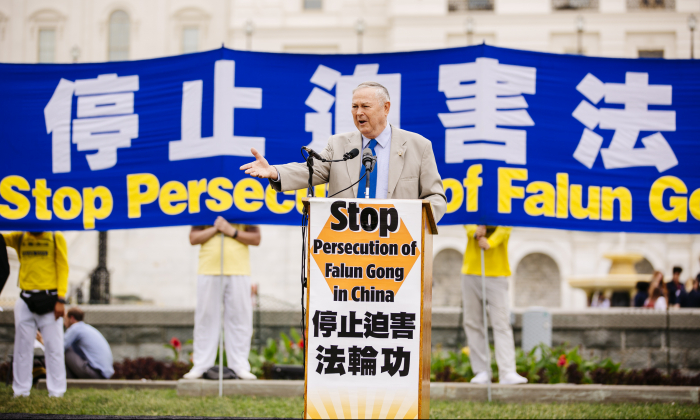 Rep. Dana Rohrabacher (R-Calif.) addresses a rally of 5,000 Falun Gong practitioners and calls for an end to the persecution of Falun Gong in China, in Washington on June 20, 2018. (Edward Dai/Epoch Times)
US News

WASHINGTON—A sea of yellow filled the West Lawn of the U.S. Capitol on June 20 as 5,000 Falun Gong practitioners gathered to protest the persecution of the practice in China and the cause of that persecution: the evil of communism.

When Congresswoman Ileana Ros-Lehtinen (R-Fla.) addressed the audience, before she said a word from her prepared remarks, she stopped and gazed out at the banners. She then said she knows about the evil specter of communism from her own experience in Cuba and the repression of all freedoms there. “The ultimate goal of communism is the destruction of the human race—I know that personally to be true,” she said.

Alan Adler, executive director of Friends of Falun Gong and host of the event, raised the question of why the Chinese Communist Party has wanted to persecute a peaceful group of meditators for nearly two decades. He said the answer must lie in “the hidden agenda of communism.”

Adler said, “No matter what forms communism may take, it has one goal: the destruction of humanity,” adding that communism destroys tradition and cuts us off from the divine above and in ourselves.

The Chinese Communist Party was also the focus of a letter from the Congressional-Executive Commission on China (CECC) signed by Chairman Senator Marco Rubio (R-Fla.) and Cochairman Representative Christopher Smith (R-N.J.). “We must never be silent about the atrocities experienced by the Falun Gong in China and we must work to hold those responsible for the torture and arbitrary detention of countless Falun Gong practitioners,” they said.

Representing the Victims of Communism (VOC) Memorial Foundation, Kristina Olney said, “We must not allow the Communist Party to spread its vile tyranny abroad and to silence us in our own country.”

Congressman Steve King (R-Iowa) wrote that it was hard for him to grasp how a group of 70 to 100 million could be denied the right to practice their faith and is “tortured … maligned, marginalized and killed” as well as having their organs sold in the marketplace. “It is an awful record of disrespect and contempt for the human rights that comes out of the Marxist government of the Communist Party of China,” he wrote.

Congressman Dana Rohrabacher (R-Calif.) addressed the practitioners with heartfelt remarks. He said he would not be a longtime supporter of Falun Gong based merely on the right of people to express their viewpoint; rather, he identifies with the core principles of Falun Gong.

Practitioners of Falun Gong seek to live according to the principles of truthfulness, compassion, and tolerance.

“I am proud to stand with you and always have been,” he said.

In the front row of the body of practitioners, about 35 participants held portraits of practitioners who were killed by the regime, typically from being tortured. Speakers at the event, including Rohrabacher, acknowledged these practitioners and others who have lost their lives.

Falun Gong practitioners first held a rally on Capitol Hill in July 2000, commemorating the beginning of the persecution on July 20, 1999. They have returned each year since.

Congressman Donald Payne (D-N.J.) departed from his prepared remarks in saying, “I will be [at these annual rallies] every year until the practitioners of Falun Gong are persecuted no more.”

Republican Congress members from Texas also made memorable speeches at the rally. Senator John Cornyn admired the practitioners’ self-improvement practice: “Your efforts to encourage participants to advance their self-cultivation continue to serve as an example for the state of Texas. Representative Ted Poe was appalled of the killing of practitioners to obtain body parts to “sell for money.” He said, “That’s the worst human rights violation in the world.”

Rep. Blaine Luetkemeyer (R-Mo.) was convinced of the worthiness of Falun Gong’s beliefs by their  response to persecution: “Through the abuse, torture, imprisonment, censorship and unconscionable organ harvesting, Falun Gong has responded only with peaceful protest and endurance, which I believe to be a true testament to the virtues of your beliefs.”

“We must do more,” said Congressman Keith Rothfus (R-Pa.). “We must continue to march faithfully forward towards ending the atrocities committed by the Communist Party of China against the practitioners of Falun Gong,” he said.

For their work in the investigating the communist practice of executing prisoners of conscience, mostly Falun Gong, for the retail value of their vital organs, Adler thanked former Canadian crown prosecutor and secretary of state (Asia/Pacific) David Kilgour and human rights attorney David Matas, who were both present to accept a human rights award from Friends of Falun Gong. Adler said that they showed courage in speaking up about these atrocities while the mainstream media has been mostly silent.

Olney from the Victims of Communism Memorial Foundation also remarked poignantly about the absence of media coverage of the crimes of forced organ harvesting: “Blood money extracted from the deceased corpses of innocent people who simply want to practice their religion or philosophy, but we in the West hear little about these abuses by Beijing, despite the staggering scale of this persecution.”

Not Letting Up on the Pressure

The speakers urged the practitioners and others like themselves to not let up on or become silent about ending China’s inhumane treatment of Falun Dafa practitioners.

Atticus Swett, from the Lantos Foundation, said, “Our conscience demands that we speak out loudly and consistently against the grave crimes committed against your community.” Swett is the grandson of Tom Lantos (1928-2008), a Hungarian-American and the only Holocaust survivor to serve in U.S. Congress. Swett pledged the support of the Lantos Foundation to the “Falun Gong community.” He said, “We must arouse our government to speak out more robustly on your behalf.”

Gus Bilirakis (R-Fla.) offered in a letter of support, “While we may not be able to snuff out violence all of the time, we can surely work to extinguish international indifference.”

Nina Shea, from the Hudson Institute, said that the Trump Administration’s National Security Strategy (NSS) makes religious freedom and protection of religious minorities to be among the priority actions. Using it and other means, she said we need to keep the brutal and savage policy of China “in front of Congress, in front of the American government, and in front of the world.”

Vice Chairman of the United States Commision on the International Religious Freedom Gayle Manchin said that the brutal actions of Chinese authorities weakens freedom of religion, which is a universal human right and “the very foundation of humanity.” She said, “It is up to us to never let China forget, to let them know that we are watching and do stand with Falun Gong …”

Ros-Lehtinen mentioned that a similar resolution to the one she sponsored and passed in the House in 2016, H.Res.343, is being sponsored this year by Sen. Robert Menendez (D-N.J.) and now has 14 cosponsors.

The resolution expresses “solidarity with Falun Gong practitioners who have lost lives, freedoms, and rights for adhering to their beliefs and practices,” and condemns “the practice of non-consenting organ harvesting.” Letters of support to the rally from Sen. Chris Van Hollen (D-Md.) and Sen. Tammy Baldwin (D-Wis.) mentioned that they are cosponsoring S.Res.220.

Among those speaking on behalf of nongovernmental organizations who are not quoted above are Robert Herman from Freedom House and Suzanne Scholte from the Defense Forum Foundation.