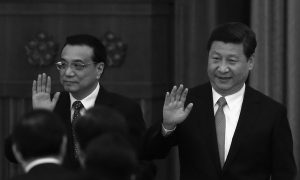 Editorial: The Chinese Communist Party Has No Way Forward
0 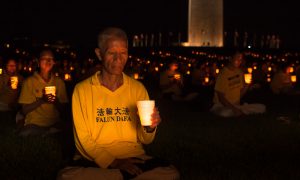 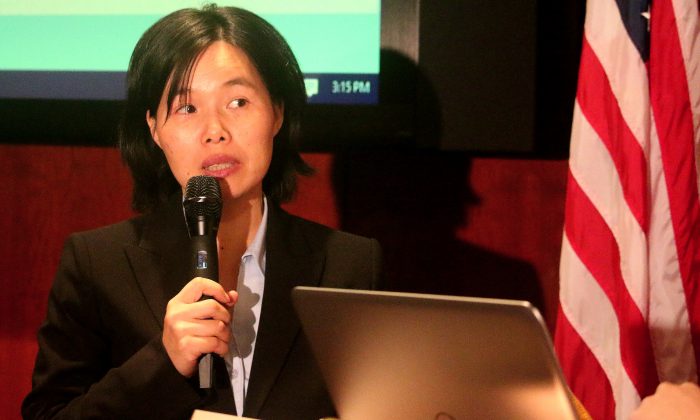 Dr. Zhang Yuwei speaks at a forum, Dec. 10, on Capitol Hill on the persecution of Falun Gong. She was severely tortured physically and mentally at a local brainwashing center and thought she was going to die. (Gary Feuerberg/Epoch Times)
China

WASHINGTON—Dec. 10 was the 65th anniversary of International Human Rights Day, the day set aside by the United Nations to commemorate the signing of the Universal Declaration of Human Rights. A forum focused on China was held on Capitol Hill to mark the occasion.

The forum covered two topics, the persecution of Falun Gong and the many hopeful signs that the Chinese Communist Party (CCP)’s collapse is inevitable, as the Party’s grip on the Chinese people weakens.

The persecution of Falun Gong began in 1999. Practitioners of Falun Gong (also known as Falun Dafa) perform five sets of meditative exercises, and follow the principles of truthfulness, compassion, and tolerance in their daily lives. The practice became very popular in China, with between 70 to 100 million adherents in 1999, according to official state and Falun Gong sources.

Eight victims of the persecution, who today live in the Washington, D.C. metropolitan area, described the torture and abuse they and their families endured in China. The individuals who spoke at the forum were unique in their circumstances, but some common threads run through their experiences. Several had held high-level positions in Chinese society.

Liu Jianing, for example, was the Deputy Mayor of Heze City, Shandong province, in 1985. In 1988, she was the Deputy Chief Engineer and Commissioner of Textile Industry Office in Shandong Province. Because she practiced Falun Gong, which she said cured her diseases and bad temper, she was arrested five times and her home was ransacked three times. She was forced into slave labor and her life was in danger in a brainwashing class.

Dr. Zhang Yuwei’s study in medical school was interrupted for almost three years because she practiced Falun Gong. At her job, she was constantly harassed because people knew she was a Falun Gong practitioner, Lee said. She was severely tortured physically and mentally at a local brainwashing center and thought she was going to die. She escaped to America in 2004 and currently is a research analyst at a prominent Fortune’s 100 Fastest-Growing Companies.

Ma Chunmei, from Dongbei Province, was abducted by security four times and sent to a labor camp twice. She was tortured by electric shock batons, beatings, being suspended by handcuffs, the “death bed” (all four limbs are stretched out to the four corners of an icy-cold metal bed) for three days, brutal forced feeding, and injections with poisonous drugs. Authorities forced her husband to divorce her, and she lost custody of her son and ownership of the family business.

Jing Yu, resided near Beijing, and was the director of a day care center that had 200 employees. She was tortured in various ways including round-the-clock beatings for three days by four policemen in a detention center because she refused to give out the names of her fellow practitioners.

Zhang Huidong was a deputy general manager in a real estate development company. Because he practiced Falun Gong, he was arrested four times. As he tried to escape his kidnappers, he jumped out of a building, causing permanent injuries to his ankles and a comminuted fracture of the lumbar spine.

Three sisters testified at the hearing. Wang Chunrong, Wang Chunying, and Wang Chunyan were successful people. They were employed, respectively, as a CEO of an accounting firm, nurse supervisor, and entrepreneur. The youngest, Wang Chunyan, spent seven years in jail, escaped to Thailand, waited there for two and half years, and arrived in the United States just one month ago.

The persecution continues in year 2015. From January through June, 393 Falun Gong practitioners have been “tried” in Chinese courts. These were nothing more than show trials, “with trumped up charges and guilty verdicts a foregone conclusion,” according to Minghui.org.

Of the 393, 110 were tortured in custody and at least 206 had their homes ransacked. The average sentence of 383 cases was 4.0 years, with most going to prison. The data Minghui could cull likely underestimate the full extent of the abuse.

Most of these 2015 practitioners were women (72 percent), based on 94 percent of the cases, and their age averaged 56 years, based on roughly half of the cases.

These trials indicate Falun Gong practitioners continue to be targeted, but don’t provide a guide to the scale of the ongoing persecution. Police can detain practitioners at any time, sending them to black jails or brainwashing centers without any legal formalities, according to Minghui.

Dr. Wang Zhiyuan, who is president of the World Organization to Investigate the Persecution of Falun Gong (WOIPFG), discussed the findings from a series of telephone investigations from January to November 2015.

World Organization investigators sampled 165 hospitals that perform organ transplants and some institutes that do voluntary organ donations. The findings show contradictions between what officially is said by the regime about organs now being voluntarily donated, and what surgeons reported to investigators.

“China’s official organ donation institutes claim that donors are very limited and successful matches are few and far between,” said Wang. Yet, “Organ transplants are still being performed in large quantities with short wait times and abundant donors.”

For example, Wang cited a doctor at the Liver and Gallbladder Surgery Department of Zhenzhou People’s Hospital, who said on June 25, 2015, “The shortest wait time for a donor is approximately 2-3 days, in general. The longest would be over 10 days. The cost is about 500,000 yuan [approx. USD 78,000). We have a lot of donors.”

According to Columbia University’s Center For Liver Disease and Transplantation, the median wait time for a liver for transplantation in the United States, which has a fully developed system of voluntary organ donation, is 321 days. In China, World Organization investigators found a voluntary donation system has not yet taken hold.

On May 14, 2015, an investigator calling the organ donation office of the Red Cross in Qinhuangdao, Hebei Province, was told that people register for organ donations at some point in their lives, but there aren’t many, and “none of them has donated their organs yet.”

In March 2015, the chief physician of the Urological Department at Henan People’s Hospital said, “It is almost impossible for Chinese people to donate their organs. You simply can’t find anyone. … If they are not related to someone by blood, who would be willing to give you their organs?”

Wang concluded from this and other evidence provided by investigators that any voluntary program in China could not accommodate the large number of transplants that were done. Therefore, large numbers of organs are extracted from other sources. The only source that could supply the numbers of organs needed are detained, non-consenting Falun Gong practitioners, Wang said.

“The persecution of Falun Gong is genocide and a crime against humanity. This offense is tantamount to crimes committed by Nazi war criminals,” Wang said.

Given the Chinese regime’s woeful human rights record, news that the CCP’s hold on power may be diminishing is significant.

Adherence to the CCP is weakening, according to statistics compiled by the Tuidang Center (aka, the Global Service Center for Quitting Chinese Communist Party), which cosponsored the forum along with the Washington, D.C. Falun Dafa Association. “Tuidang” means quitting the party. Over 220 million Chinese people have renounced the CCP and its affiliated organizations, according the Center’s chairperson, Yi Rong.

“In 2015, the Tuidang movement has been growing at about 95,000 people per day,” she said. The 220 million number is an undercount because many Chinese on the mainland lack a direct way to make their withdrawals known to the Center, which is located outside China.

From a young age, Chinese people are brainwashed to believe that the Chinese Communist Party is China, and opposing the CCP is betraying China.
— Yi Rong, chairperson, Global Service Center for Quitting CCP

“From a young age, Chinese people are brainwashed to believe that the Chinese Communist Party is China, and opposing the CCP is betraying China,” she said. While renouncing the CCP may appear a simple matter, “it has very profound implications for the lives of Chinese people,” she said.

Over 700 million Chinese people are estimated by the Center to have affiliated with at least one of the three communist party organizations.

Dr. Sen Nieh, Chair of the Mechanical Engineering Department of Catholic University of America, said that even members of the Communist Party are leaving. He mentioned a group of members of the Party in Hunan Province in the summer of 2013, where over 5,000 quit the Party at one time as a group.

Another hopeful indicator that opposition to the persecution Falun Gong is gaining momentum is a worldwide movement, including China, to sue the instigator of the persecution, former Chinese communist leader Jiang Zemin.

“Starting from the end of May 2015 to December 2015, more than 200,000 Falun Gong practitioners and their families and relatives have used their real names to file criminal complaints against Jiang Zemin at China’s Supreme Procuratorate,” said Zhang Yijie, spokesperson for World Organization to Bring Jiang Zemin to Justice. Her prepared speech was read at the forum.

Zhang called for the immediate arrest of Jiang and the announcement of all his crimes in the persecution. She also said that those in her organization hope that nations and people condemn the CCP’s persecution of Falun Gong, “despite the economic benefits pressure.”

Starting from the end of May 2015 to December 2015, more than 200,000 Falun Gong practitioners and their families and relatives have used their real names to file criminal complaints against Jiang Zemin.
— Zhang Yijie, spokesperson, World Organization to Bring Jiang Zemin to Justice

The act of bringing lawsuits against Jiang is not new. It first started in August 2000 in China. In the United States in April 2003, attorney Terri Marsh submitted a lawsuit against Jiang and the “610 Office” (an extra-judicial Party organization created to implement policies to suppress and destroy Falun Gong), to the United States District Court for the Northern District of Illinois.

However, from May to the present, there has been a tidal wave of complaints against Jiang that differ in one respect from the complaint filed in 2000.

“In the year 2000, the Supreme Procuratorate and the Supreme Court of China dared not accept the indictments,” attorney Hugo Pong said. “Starting in May 2015, they are accepting them with confirmed receipts.”

The new attitude is not universal, however. “In some regions of China, police used the indictment letters to find Falun Gong practitioners filing complaints and the kidnapped them,” said Pong.

“You are not alone,” said Congressman Dana Rohrabacher (R-Calif.), who dropped by to wish the forum well, as did Congressman Ted Poe (R-Texas).

Rohrabacher said Falun Gong practitioners help Americans know what is really happening in China and show a better way. By standing for the good and opposing the evil force, practitioners tell the American people what we should do as a nation, he said.