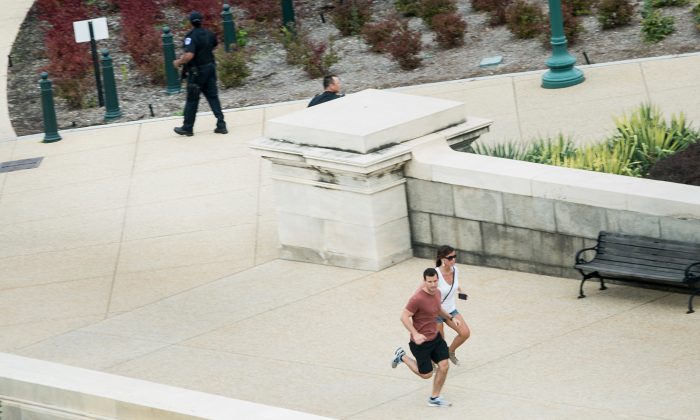 People run for cover as police converge to the site of a shooting October 3, 2013 on Capitol Hill in Washington, DC. (Brendan Smialowski/AFP/Getty Images)
Politics

Shots were fired near the U.S. Capitol building in Washington D.C., prompting the House of Representatives and Senate to be locked down. A female suspect was reported dead on the scene, according to NBC and ABC affiliate WJLA.

The suspect apparently tried to ram a barricade at the White House before police, and Secret Service agents chased her to the Capitol Hill area. Later, the woman then apparently hit police car near Capitol Hill before officers shot at her vehicle, NBC reported.

The woman also had a child with her in her car.

Capitol Police Chief Kim Dine said that the shooting is an isolated incident and not terrorism-related.

Photos uploaded on Twitter show a heavily damaged Capitol Police car. One officer was injured in the incident, reported The Associated Press.

Tourists watched the shooting unfold on Constitution Avenue outside the Capitol as lawmakers inside debated how to end a government shutdown. Police quickly locked down the entire complex for about an hour, and both houses of Congress went into recess.

At least 20 police cars were involved with chasing the woman’s black Lexus toward Capitol Hill, where the vehicle crashed.

Tourist Edmund Ofori-Attah said he walked toward the scene, curious about what was going on.

“Then I heard the gunfire” and hit the ground, he told The Associated Press.

On Twitter, a number of U.S. officials–including members of Congress–wrote about hearing gunfire.

“Shots fired outside the Capitol. We are in temporary lock down,” Sen. Claire McKaskill wrote.

Rep. Tulsi Gabbard wrote on Twitter: “On lockdown down in my office. Tracking down my staff. Alarms sounding. Shots fired outside US.”

Photos taken of the scene show swarms of police officers and cars outside the Capitol.

[View the story “Capitol Building on Lockdown” on Storify]