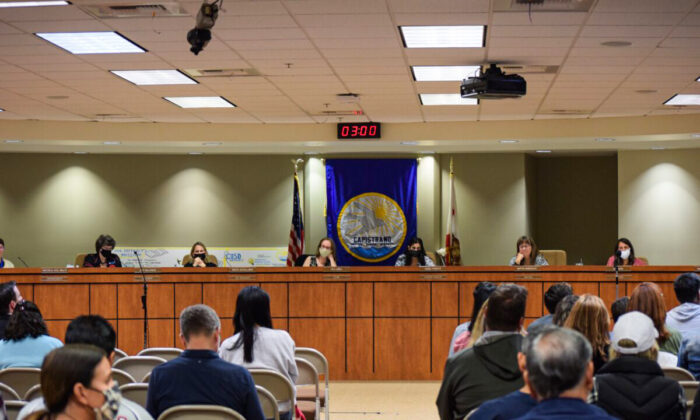 SAN JUAN CAPISTRANO, Calif.—Following the resignation of Trustee Pamela Braunstein earlier this month, the Capistrano Unified School District voted to hold a special election in November to fill the Area 2 trustee vacant seat rather than through appointment.

“It is my recommendation for this board to call an election,” Kirsten Vital Brulte, Capistrano Unified School District superintendent, said during the meeting. “We think it’s important … to focus on teaching, learning, and the well-being of students.”

Trustee Krista Castellanos said an appointment may have been considered before the pandemic. However, since 2020, the needs of the community and what happens in the boardroom have changed.

“Something happened in the world,” Trustee Krista Castellanos said, referring to the COVID-19 pandemic as “a life-altering event” for everyone. “Maybe we can go back to it at some point, but I think it’s important … that we go to an election at this point for this particular seat.”

Braunstein, who covered Ladera Ranch and most of San Juan Capistrano under the Area 2 seat, resigned from her position on March 3 due to anti-mask mandate policies proposed by other trustee members and, “the never-ending harassment by a certain vocal minority group,” she wrote in an email response to Voice of OC on March 4.

Trustee Lisa Davis, who opposed waiting until November to fill the vacant board seat, said although she agreed with holding an election for voters to choose, she wished the election could be held sooner than later.

“I wish that were the case,” Davis said during the meeting. “But we’re not in that situation, and I think it’s important that a voice is being represented from Area 2.”

During the meeting, trustees, district officials, and 28 parents of the district’s students voiced their opinion on possible options to fill the seat.

“Please allow voters to choose their trustee in November,” a parent said during the public comments. “Don’t make the school board a destination point for extreme partisanship or used as a stepping stone for future political aspirations.”

While most people in attendance favored electing a new trustee in November, some hoped that the board could also appoint a suitable temporary trustee before the election.

“I am here to support the board on filling the empty seat until we can hold an election in November,” said another parent during the public comments.

The Area 2 trustee seat will remain vacant until the Nov. 8 election.