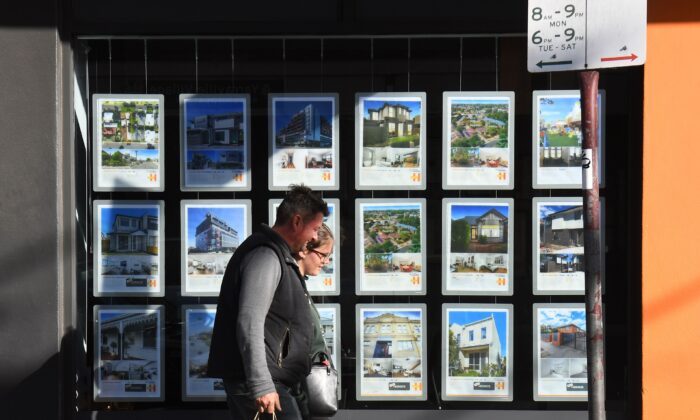 A couple walks past a real estate agent's window advertising houses for sale and auction in Melbourne on May 1, 2019. (WILLIAM WEST/AFP via Getty Images)
Global Real Estate

Can’t Afford a Home in the US? Experts Share Their Top Tips Before Investing Overseas

It’s no secret among Americans that many would-be homebuyers have been priced out of the market due to rising mortgage interest rates and persistent inflated listing prices. Some are now considering more affordable options abroad, but experts are warning potential buyers to do their homework before shelling out their savings for the American Dream overseas.

Kathleen Peddicord and her husband Lief Simon, owners of Live and Invest Overseas, noted the biggest surprise for most first-time overseas investors is the transfer tax that most countries impose when buying a property.

“This is not common in the United States, and it can be as little as 1 percent of the purchase price or as high as 10 percent,” Simon told The Epoch Times. “For example, Belize charges an 8 percent transfer tax, while Ireland is only 5 percent, and has very low property taxes.”

In general, explained Simon, property taxes tend to be way lower than they are in the United States. “However, there could also be limited services and infrastructure,” he added. Retirees’ pensions may also be tax-free in some foreign nations.

Another major difference is that multiple-listing services may not be available in some countries. In that case, the onus is on the buyer to seek out various local real estate agents to review their listings. “There’s nothing like a Zillow or Realtor.com in some foreign locations, and so running comparisons can also be a problem,” Peddicord told The Epoch Times. “We suggest people visit as many agents as possible to see what’s out there and compare prices.”

Those determined to purchase overseas should also plan on spending a significant amount of time in the country they choose. While they can begin their research online, Peddicord notes, they’ll want to put some “boots on the ground” and speak with agents in person. “This also includes budgeting for your round-trip cost, expenses for accommodations, transportation, and food,” she said.

Potential homebuyers must also be prepared for cash deals, as obtaining a mortgage can often be difficult for nonresidents. In fact, retirees should definitely plan on using cash, as most banks will not grant mortgages to anyone beyond the age of 70.

Peddicord said real estate in some nations, such as Argentina and Mexico, is priced in U.S. dollars and potential homeowners can pay in dollars.  In many European nations, buyers can convert dollars to euros to complete the sale.

“Right now, the euro is weak compared to the dollar, so it may be a good time to consider purchasing there.”

For those considering a condo or a gated community, Simon reminds them to first research any home-owner association fees.  “They should make sure there’s no deferred maintenance and that the finances are in great shape,” he said. “If they’re considering buying something with the intent to rent out, make sure the home is in a desired area and determine whether you’ll need a local license to rent it.”

A Popular Destination for Americans

Other considerations before making a major move to a foreign country are language, food options, the cost of owning and operating a car, availability of public transportation, weather variations, and potential lifestyle changes.

“The first thing to do is be clear … about why you’re buying a property—is it for vacation purposes, as an investment, or to live there full time?” said Peddicord. “You’ll also need to think about furnishing it, and if it is a rental property, you may not want to invest in expensive in furniture and art.”

One of the most popular overseas destination for Americans over the past several years has been Portugal. “It checks all the boxes,” added Peddicord. “It has great weather, English is widely spoken there, it’s very safe, has great health care, nice cities, beaches, and is very affordable compared to the rest of Europe.”

Antonio Barbosa, owner of the real estate firm Infinite Solutions in Valenca, Portugal, told The Epoch Times that Americans comprise the largest group of buyers there, followed by people from the United Kingdom, Asia, and South Africa.  “The exchange rate has never been so profitable for Americans,” he said. “Buying a house in Portugal is now 20 percent cheaper for American buyers since July 2022.”

Barbosa’s clients include retirees, as well as some younger families seeking a simpler lifestyle. “Education and health care are their biggest concerns, and as a permanent resident, they are entitled to these benefits just like any Portuguese citizen,” he explained.  Safety is always a big concern, and the Global Peace Index has ranked Portugal as the sixth safest country in the world among 163 countries.

Much like in the United States, buyers are likely to find more economical deals outside of the major urban areas. In Lisbon, for example, the average cost per square meter is €4,623, or $4,607.  Outside of Lisbon, costs per square meter drop to about €2,729, or $2,719. Other affordable suburban areas include Porto City, Coimbra City, and Braga City.

Barbosa credits Portugal’s ample leisure activities for making it such a popular destination. “You might want a thriving expat community or you might want to step back and find a more remote and peaceful area,” he said. “Portugal is also a wonderland of leisure, with some of the best golf courses in Europe and a flourishing food and wine scene.” Of course, he noted, there’s also the country’s 600 kilometers of beaches and 300 days of sunshine a year.

A Destination on the Rise

Global real estate expert Esther Muller of Sotheby’s International in Manhattan is also touting the advantages of relocating to Israel. “It has an amazing reputation for innovation and creativity, the weather is beautiful all year round, it attracts both young people and retirees, English is widely spoken, and all religions are welcome,” she told The Epoch Times. “Plus, it’s very safe. I live on Central Park South, but I won’t walk in the park after dark. In Israel, I can walk any time and not have any fear.”

With more than 30 years of experience in the real estate industry, Muller points out that Israel has also become a hot, new overseas destination. “The U.S. housing market has turned in extreme directions in the past few years, which has left prospective homeowners feeling more hopeless as time goes on,” she said. “While it may seem near impossible to find a great home for a decent price here, that’s not the case in other places abroad.”

While Tel Aviv may be difficult to afford, Muller notes there are many less expensive options available. As a current property owner in Israel, she said development is on the rise as more Americans and others are discovering they can enjoy a more affordable and less stressed lifestyle there. Mediterranean Sea destinations such as Haifa and Netanya are popular because of the beaches, while Jerusalem and Nazareth continue to attract those of both the Jewish and Christian faiths.

Netanya is known as Israel’s Riviera, or the Miami of Israel, and beyond its beaches, it is popular for its central location—just 25 minutes from Tel Aviv and one hour from Jerusalem.

Echoing Peddicord’s recommendations, Muller encourages potential homeowners to spend some time there before deciding to invest in real estate. “It’s really important to take the time to look around and select the community that best meets your needs,” she said. “You have to find the right fit before you commit.”