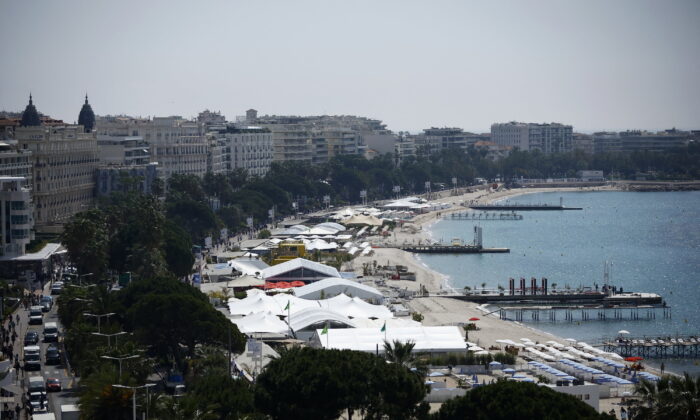 A general view shows the Croisette on the eve of the opening ceremony of the 75th Cannes Film Festival, in Cannes, France, on May 16, 2022. (Stephane Mahe/Reuters)
Entertainment News

CANNES, France—The Cannes Film Festival is gearing up for a bumper 75th anniversary edition with a selection of big Hollywood names, buzzy newcomers and previous Palme d’Or winners—a splashy return even as the conflict in Ukraine looms over festivities.

“I honestly think this is one of the best Cannes line-ups in years,” said Scott Roxborough, European bureau chief for The Hollywood Reporter.

The festival runs from May 17 to 28, resuming its traditional calendar following two years of pandemic disruptions. It was canceled in 2020, and last year moved to July, when it was held under strict COVID-19 protocols.

This year, the parties are back and Hollywood heavyweights will include Tom Cruise’s “Top Gun Maverick,”—bringing the star to Cannes for the first time in three decades—as well as Baz Luhrmann’s Elvis biopic, starring Austin Butler and Tom Hanks. Actor Forest Whitaker will be on hand to receive the festival’s Honorary Palme D’Or for lifetime achievement.

David Cronenberg will mark his return to horror films with “Crimes of the Future,” featuring Viggo Mortensen, Kristen Stewart, and Lea Seydoux.

There will also be a strong showing from Asia, despite the absence of China, with films by Park Chan-wook and Hirokazu Kore-eda in competition and “Squid Game” actor Lee Jung-jae premiering his new film “Hunt”.

“Everyone wants to sort of come back for this moment, sort of this re-awakening of cinema here in Cannes,” said Roxborough.

The festival opens on Tuesday with a zombie film, “Final cut,” by French filmmaker Michel Hazanavicius, who changed the title from “Z, like Z” to strip out a reference to the letter which has become associated with the war in Ukraine.

The festival banned official Russian delegations from the event but will feature “Tchaikovski’s Wife” by exiled Russian director Kirill Serebrennikov, who has been outspoken about the war.

Also screening is “Mariupolis 2” by Lithuanian director Mantas Kvedaravicius, 45, who was killed in Mariupol, the Ukrainian city heavily bombarded by Russian forces, nearly a month ago while working on the film. His fiancée Hanna Bilobrova, who finished the project, will present it.

Another Ukrainian entry is a debut film from Maksim Nakonechnyi, “Butterfly Vision,” the story of a young Ukrainian woman who returns to her country after being captured then released in a prisoner swap.

By Mimosa Spencer and Hanna Rantala