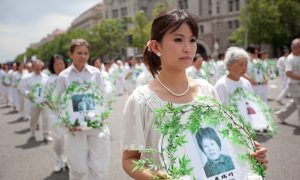 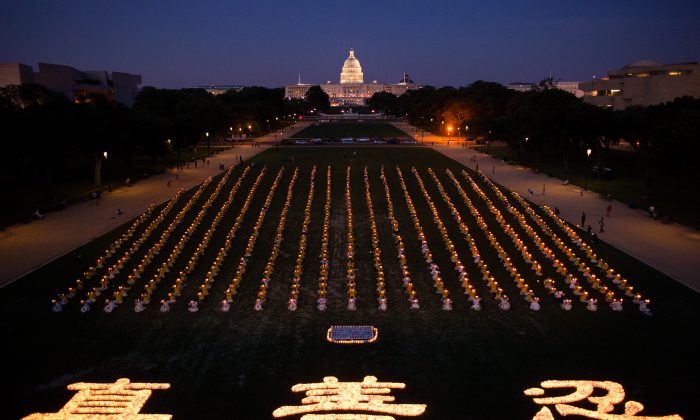 Falun Gong practitioners gather together to hold a candle light vigil in front of the U.S. Capitol, to commemorate the lives lost by the persecution, in Washington, D.C., on July 17, 2014. This year marks the 15 year of the persecution that started on July 20, 1999 in China. (Dai Bing/Epoch Times)
China

WASHINGTON—Over five hundred gathered for a candlelight vigil on the National Mall on the evening of July 17 in silent support of the tens of millions of Falun Gong practitioners persecuted for practicing their beliefs in China. Some of those attending the vigil have experienced that persecution first hand.

Lin Qian (aka Melody) and her husband Rao Zhuoyuan were medical workers in southern China’s Guangdong Province, when they began practicing Falun Gong in 1994.

In 2002 their daughter Deru was four when Rao was murdered by Chinese Communist Party (CCP) agents for refusing to denounce the practice.

Qian fled to Thailand with Deru in 2005, following repeated attempts by CCP agents to arrest her. They arrived in the United States two years later. Qian has attended the candlelight vigil in Washington every year since her arrival.

This July 20 is the 15th anniversary of the beginning of the persecution. In 1999, the then-CCP leader, Jiang Zemin, launched his campaign to eradicate the practice of Falun Gong in China. Practitioners suffered detention, torture, and brainwashing.

Cin Peng, who escaped persecution by moving to the United States in 2011, said it was not just the 100 million practitioners who suffered, but their family members as well.

“I want for this persecution to end, and also for the Chinese Communist Regime to end as well,” Cin said.

Cin noted that he had known Falun Gong practitioners who later were killed for their beliefs.

Cin was incarcerated and tortured in a brainwashing center and other CCP operated facilities for a total of five years. He recalled, in one instance, being locked into a metal chair for 17 days and nights straight.

Frieda Kata, a New Jersey resident who is originally from Uzbekistan, has attended the Washington gathering every year since 2001. The candle vigil is an important way to tell “people who live here and tourists about the very bad persecution in China,” she said.

“The world has to know and stop this,” Kata said.