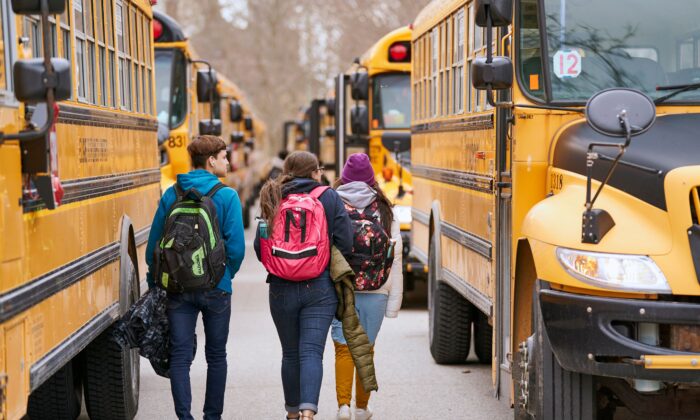 A number of Ontarians concerned about “political activism” in public schools have decided to step up to run for school board trustee in the upcoming municipal elections, in the hopes of not only calling attention to this and other issues but also to bring about change.

With the elections just over a month away on Oct. 24, The Epoch Times spoke with several candidates running for the job of trustee on various school boards in the province. All expressed a desire to remove politics and ideology from the classroom in favour of a more centrist and neutral approach.

“These words that are being used, like ‘diversity,’ is not diversity of opinion. ‘Inclusion’ is raising up some and pushing down others. It’s not including everyone.”

Miklos is running in the same district as Mike Ramsay, who served as a trustee in the region for over 30 years but in early June was suspended from all meetings until Sept. 30 for supposedly breaching the board’s code of conduct.

The suspension came shortly after Ramsay publicly criticized WRDSB chair Scott Piatkowski for cutting short a teacher’s presentation during a board meeting about sexually explicit materials available to children in school libraries.

The teacher, Carolyn Burjoski, was later assigned to work from home and said she felt “bullied, slandered, and abused” by board members who spoke out against her in radio and television interviews.

Cristina Bairos Fernandes, a candidate for the Waterloo & Wilmot municipality, said it was Ramsey’s suspension and the treatment of Burjoski that made her realize the WRDSB was in need of opposing voices.

“It’s just the lack of integrity, with disrespect within the board,” she said.

Fernandes said that when Ramsay was suspended, she and many other WRDSB constituents formed a delegation to voice their opposition to the board, but it was fruitless. She said she also contacted the ministry of education several times, but “with zero response.”

“Us, the constituents, are paying for these services, but nobody’s answering our questions. How is that even remotely OK?” she said.

David Sabine, a candidate running for trustee in the Thames Valley District School Board of London, said many parents are unaware of how their tax dollars are being spent in the public school system.

“Children are deliberately exposed to political activism in schools, funded by the taxpayer, and that needs to stop,” Sabine said.

He said parents have been reaching out to him about their concerns over the growing explicitness of Ontario’s sex-education curriculum, as well as the books found in school libraries.

“They’ve sent me examples of books that they have found in elementary school libraries in London,” he said. “These examples are shocking. They need to be taken out of the school and sent back to the adult bookstore where that audience belongs.”

However, he said the biggest issue is a lack of transparency on the schools’ part in showing parents the materials to which their children are being exposed on a daily basis.

“What I’m really concerned about is that taxpayers are unaware of how far it’s gone,” he said.

The solution to these problems isn’t through posting tweets or debating with school administrations, but through running in school board elections, says Peter Wallace, a candidate for the Trillium Lakelands District School Board.

Wallace initiated a shared platform for Canadian public education policy called “Blueprint for Canada,” which lists a number of policy positions that he and some other candidates have adopted for the upcoming election.

“I realized that there are a lot of other trustee candidates out there who seem to be of the same mindset in terms of the things that we’re concerned about,” he said.

Chanel Pfahl, a trustee candidate for the Ottawa-Carleton District School Board (OCDSB), said she uses the blueprint as her campaign platform because it “summarizes common-sense policies” that she believes should be implemented in schools.

Pfahl is a Barrie high school teacher who was suspended after posting comments challenging critical race theory in a Facebook group. She says that if she is elected trustee, her main goal will be to “represent the public” in the decisions that her school board makes.

“Right now, the public’s not being represented in any way because it’s being run by people who are ideologically motivated,” she said.

“I would just be working to give a voice to the majority.”

Shannon Boschy, who is also running to be an OCDSB trustee, is a former high school teacher who says he is fighting against “controversial ideologies and beliefs” that have permeated so many Ontario schools.

Boschy said “critical gender theories,” particularly regarding transgenderism, are becoming prevalent in Ontario’s schools and that they’re leading to a culture of gender identity “affirmation” rather than one of helpful guidance for children.

“No one’s allowed to disagree with or question a kid at all under threat of law,” he said, adding that his stance against such ideology being imposed on schoolchildren has led to a number of attacks against his character both in person and online.

“We need to raise conversation, and, as well, as a school board trustee, part of my concern is to push back against these assumptions.”

“Because they are kids, and they are prone to making bad decisions, so they need adults that are going to safeguard them and not just validate their every feeling and go along with whatever it is that they say they want,” she says.

Fernandes says she believes that the public school system has stepped too far out of line with sex and gender education, and that changing the situation requires that trustees and school administration members be more transparent with their constituents and work to democratically carry out their constituents’ wishes.

In the end, a trustee’s role is to truly advocate for their constituents and, most importantly, for the students, she said.

“Because really, it starts with the kids, when we look at our society.”