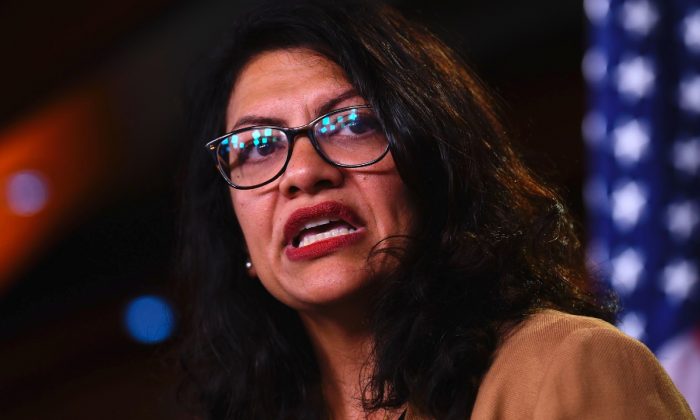 Candidates in Michigan Call for Censuring Rep. Tlaib Over Lying About Her Address

Two candidates in Michigan for the U.S. House of Representatives are calling for Congress to formally censure Michigan Democrat Rep. Rashida Tlaib, based on her father’s claim that she lied about her address—saying she lived in her father’s house—to register to vote and to run for office, allowing Tlaib to represent an inner-city Detroit state House district even though she lived in the suburb of Dearborn.

“She lied big-time to get elected. I never teach her that way. I teach her the right way. It’s my house. She didn’t live there. She lived in Dearborn in her house with her husband and boy,” Tlaib’s father, Harbi Elabed, told reporter Charlie LeDuff of The Detroit News in 2010.

Tlaib used her father’s address on her affidavit to run for the 12th District state House seat, formerly held by her political mentor Steve Tobocman, for whom she worked as an aide in 2008, and on her voter registration in March 2008.

Michigan state Rep. James Lower, a Republican challenging Rep. Justin Amash in the primary for Amash’s U.S. House seat, told The Epoch Times that Tlaib can be formally censured by Congress, and that the U.S. House must act.

“It’s clear from her father’s statements that U.S. Rep. Rashida Tlaib lied about where she lived to run for State Representative in Michigan. Instead of wasting more time investigating President Trump, the U.S. House of Representatives should investigate these allegations of voter fraud committed by Rashida Tlaib and formally censure her for this illegal conduct and her anti-Semitic statements,” Lower said.

“It’s very ironic that Congresswoman Tlaib wants to impeach President Trump for allegations of Russian collusion that he has been cleared of, yet she herself is actually guilty of voter fraud according to her own father.”

Tom Norton, another Republican candidate in the primary to challenge Justin Amash, said: “Democrat Rashida Tlaib violated both state election law and federal law when she lied about her address to run for office in Michigan. Rashida’s own father even said that Tlaib ‘lied’—his word. The rule of law is eroding quickly in our United States.”

As Lower knows, it is illegal for a member of his body to represent a state House district in which the lawmaker doesn’t actually live.

Verizon Wireless records show that Tlaib first started using her current apartment in Detroit one day before she announced her congressional campaign on Feb. 6, 2018.

According to Section 7 of Article IV of the Michigan State Constitution: “Each senator and representative must be a citizen of the United States, at least 21 years of age, and an elector of the district he represents. The removal of his domicile from the district shall be deemed a vacation of the office.”

According to Michigan’s Act 116 of 1954, Section 168.161, “A person is not eligible to the office of state senator or representative unless the person is a citizen of the United States and a registered and qualified elector of the district he or she represents by the filing deadline, as provided in section 7 of article IV of the state constitution of 1963.”

Sec. 11.(1) of Michigan election law states: “‘Residence’, as used in this act, for registration and voting purposes means that place at which a person habitually sleeps, keeps his or her personal effects, and has a regular place of lodging. If a person has more than 1 residence, or if a person has a residence separate from that of his or her spouse, that place at which the person resides the greater part of the time shall be his or her official residence for the purposes of this act. This section does not affect existing judicial interpretation of the term residence.”

Tlaib’s communications director, Denzel McCampbell, told The Epoch Times, “Congresswoman Tlaib has been a resident of Detroit all of her life and lives in the 13th Congressional District—the district she proudly represents in Congress.”