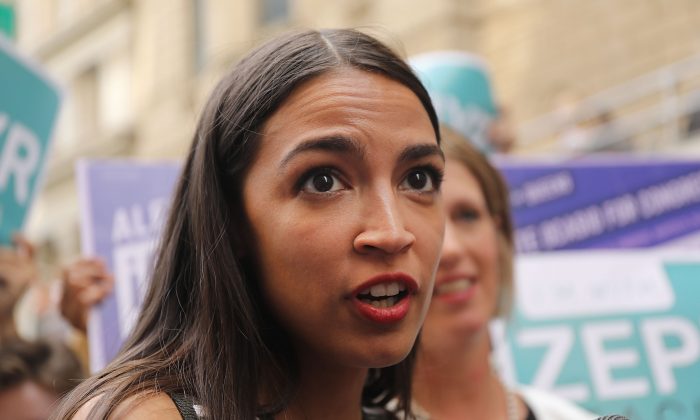 Alexandria Ocasio-Cortez, the Democratic congressional candidate for New York, called Israel “occupiers” in a July 13 interview, before admitting she did not have enough knowledge on the topic.

Ocasio-Cortez, a member of the Democratic Socialists of America who won over long-serving Rep. Joe Crowley (D-N.Y.), is a newcomer to politics. When asked about her views on foreign policy, the 28-year-old visibly struggled to describe her position in relation to the Israel–Palestine conflict.

“What people are starting to see in the occupation of Palestine is just an increasing crisis of humanitarian conditions, and that, to me, is just where I tend to come from on this issue,” Ocasio-Cortez said in an interview on the PBS show “Firing Line.”

The show’s host, Margaret Hoover, asked the candidate to elaborate on her claim that Israel was occupying Palestine.

“Oh, I think—what I meant is that—the settlements that are increasing in some of these areas and places where Palestinians are experiencing difficulty in access to housing and homes,” Ocasio-Cortez said.

“Do you think you can expand on that?” Hoover asked.

“Yeah, I think—I am not the expert on geopolitics on this issue,” Ocasio-Cortez said.

In the interview, Ocasio-Cortez acknowledged that she “may not use the right words” on Middle East issues, adding that she would be “happy to sit down” and talk with the leaders of both countries.

Ocasio-Cortez sparked controversy in May this year after she called the killing of Palestinians in Gaza by Israeli soldiers “a massacre” on Twitter. The majority of those killed were later reported to have been Hamas terrorists.

During Friday’s interview, the candidate appeared to backtrack on her comments, saying that she wrote it at the time as an “activist” and promised to “learn and evolve.” She said her position on Israel is in support of a two-state solution.

Earlier this month, the Bronx-born candidate made headlines after it was revealed that her self-described “working class” background had been exaggerated. Ocasio-Cortez was only 5 years old when her father, an architect with his own business, moved the family to a wealthy suburb in Westchester County, where she attended Yorktown High School.