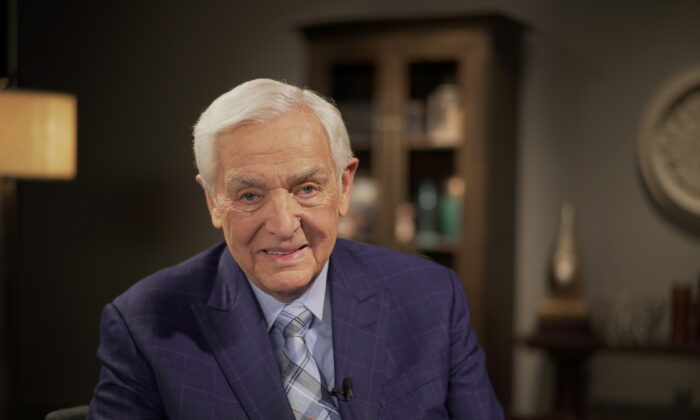 Many Americans don’t understand the nature of socialism nor its dangers, according to David Jeremiah
By Thought Leaders

“A deadly virus is quietly spreading through our nation,” says David Jeremiah, “and it’s far more lethal than COVID-19.”

On a recent episode of American Thought Leaders, Jan Jekielek discussed our current political moment with David Jeremiah, host of “Turning Point for God,” senior pastor of the Shadow Mountain Community Church, and author of “Where Do We Go From Here?”

Jan Jekielek: In your recent book, “Where Do We Go From Here?” you wrote, “A deadly virus is quietly spreading throughout our nation. It is far more lethal than COVID-19, and most Americans are totally unaware of the threat that it poses to our freedom and way of life.”

David Jeremiah: I was talking about socialism, and it’s true. I had some knowledge when I started to work on this project, but I actually studied socialism for a whole year. I read everything I could find, went through the history of it, how it got started, and did an awful lot of work on Karl Marx.

This is a very frightening thing that’s happening in our country today, and, as I wrote, most people don’t even know it.

Mr. Jekielek: What do you think is the most important thing that people need to know that they don’t understand?

Mr. Jeremiah: Many people are surprised to discover that socialism is anti-God. Socialists don’t believe that there is no God. They’re not atheists: They’re anti-God. In fact, Karl Marx was not only anti-God, he was a cheerleader for the devil, and even the people that were close to him felt he was demon-possessed. He came from a very dark place.

He said in one place that he was born to God, and now he knows he was chosen for hell. He considered himself totally beyond any hope of redemption, and so lived his life with a careless evil that isn’t producible in most other people that I’ve read.

There’s no room for God in socialism.

Mr. Jekielek: We can agree that Marx was anti-God, but of course socialism has evolved since then. You’re saying that socialism is anti-God as we speak?

Mr. Jeremiah: Yeah, one of his key phrases was to “wipe God out of heaven and capitalists off the earth.” That was his twofold program. And it’s really scary to me because I speak in colleges, and there’s a lot of university students who were captivated by this. Young people between 18 and 25, 60-some percent of them think socialism is cool, more than anything else because of all the free stuff they get promised in the process. But when they understand the roots of socialism, it makes them stop and think. I wonder if the people who are champions of socialism really understand the poisonous foundation upon which it was founded.

Mr. Jekielek: In your book, you talk quite a bit about cancel culture.

Mr. Jeremiah: One of the key ingredients of socialism is totalitarianism. Socialists can’t stand the light of contrary discussion. They black out everything other than their own view.

And we’re seeing that in our country today.

One night when I was working on this project, I watched something on television about a school—I think it was in Virginia—where the administrators wanted to disavow all of the holidays and just call them student vacations.

They had a parents’ meeting, and when a parent got up to disagree, the moderator slammed his fist on the table and said, “This is not a debate.” And the meeting was done.

If there’s no room for discussion or disagreement, if there’s no room for going back and forth and trying to understand each other, you’ve lost society altogether. What you have is a dictatorship, and totalitarianism is a building block of socialism that’s very much a part of the culture cancer. Cancer is a good word for it, the culture of canceling everything that you don’t agree with.

Mr. Jekielek: So, what do you think of a school board member basically saying, “Sorry, there’s no debate, parents?”

Mr. Jeremiah: Aleksandr Solzhenitsyn once gave a speech titled “Live Not By Lies.” The first point in his speech was, “You cannot allow yourself to live by lies. You may not be able to champion the truth, but you can refuse to live by lies.”

That’s what I think has to happen among the American people. They have to stand up for the truth. It isn’t just his idea, the chairman is being programmed by the ideology of socialism. If there’s no way to push back on that, you’ve lost the game already.

Cancel culture is a wicked thing. Interestingly enough, I gave a speech about that at a university back east. There were 13,000 kids in this event, and this girl came down to me who was in tears, and she said, “My dad got canceled last week.”

She said, “He’s a well-known surgeon here in this area, and my mom is a very strong evangelical who posted some positive things about Jesus on her website. My dad’s partners saw it, and they got together and decided they didn’t want him in their group anymore, and so they fired him.”

I know numerous people who have stood up for what they believe, not necessarily for religious reasons, and because they don’t follow the party line, they’re gone.

Mr. Jekielek: This is what I was going to say. It’s not just Christians, not by a long shot.

Mr. Jeremiah: No, sir. I live in that world, so those are the examples that I know of. But I also know it’s happening to a lot of people, and it’s certainly not a part of American culture and history.

Mr. Jekielek: In your book, you cite a number of people I’ve interviewed on American Thought Leaders. For example, Iván Simonovis is one of my favorite interviews. You start the book with him.

Mr. Jeremiah: He got chased all over Venezuela until he got onto a boat in the Caribbean and finally got here to America.

I told that story primarily because of the interest factor, but also because Venezuela is a perfect picture of where we’re headed if we don’t stop what’s happening right now. It’s amazing to realize that just in our lifetime, Venezuela was the richest country in that part of the world. People had the same standard of living we do, and then Hugo Chávez became the head and began to socialize it. He died, and Maduro came along.

Today the average Venezuelan makes $1 a day. They don’t have enough to eat. Their country has unraveled totally. Socialism takes people down. It doesn’t lift them up.

Mr. Jekielek: You noted another one of my favorite guests, Xi Van Fleet, who stood up in Loudoun County, Virginia, and said what she’s seeing in our society reminds her of the Cultural Revolution in China.

Mr. Jeremiah: It was chilling because I was reading about socialism, and here’s this woman who’s saying, “I see happening here what I remember happened in China, and it’s frightening to me.” It should be frightening to us all.

Mr. Jekielek: One of the silver linings of COVID is that parents saw over Zoom what was being taught in the schools.

Mr. Jeremiah: Exactly. They actually got to see what their kids were learning—what they were being taught. I’ll give you a little statistic that’s an interesting thing. We’ve built Christian Unified School District, and we have three elementary schools, a junior high, and a high school.

When COVID started, we had a total of 1,000 students in grades K through 12. We added 500 students during COVID. The student body now is 1,530. We didn’t recruit. We didn’t do anything. Parents are sick of this and withdraw [their children] because they don’t see any way to change what’s happening in their schools.

Mr. Jekielek: Where do the listeners to your radio show see things going at this point?

Mr. Jeremiah: First of all, I think we’re now in a period of rebellion against “wokeism.”

I believe there are more straight-thinking people in America than the other side realizes. They think they’ve won, but they haven’t.

Socialists want control of the family. Their goal is to get rid of it, get control of the schools, and tell the parents, “You don’t have the right to tell us what we’re going to teach your children.”

But a lot of parents are saying, “No, you’re not doing that at my school.”

Mr. Jekielek: What is your greatest fear in all of this?

Mr. Jeremiah: As we began this discussion, we talked about how so many people are unaware of the danger. That’s why I wrote the book. I wanted to help people to understand how this whole thing works. Get rid of the things people hold dear, destroy the things at the core of who they are: their family, their church, their marriage.

And if people understand that, it makes them aware of what’s happening.