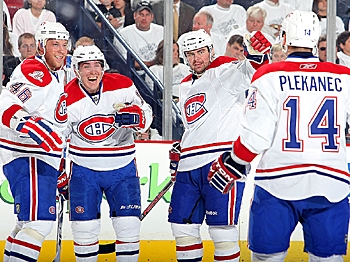 By Rahul Vaidyanath
Print
The clock hasn’t struck midnight yet for the Cinderella Montreal Canadiens.

In Game 7 against the defending Stanley Cup champion Pittsburgh Penguins, the Canadiens played a near-perfect game and came away with a convincing 5–2 win to take the series 4–3.

After coming back from 3–1 down against top-seeded Washington in the first round, the Habs beat a more experienced and better balanced team in Pittsburgh.

The Canadiens jumped out to a very early lead thanks to Pens captain Sidney Crosby. The Canadian icon slammed Josh Gorges into the boards and got a boarding penalty after only 10 seconds of play. Recall the nastiness that took place between the two at the end of Game 6 on Monday.

The Canadiens capitalized on the ensuing power play as Brian Gionta deflected a P.K. Subban backhand past Marc-Andre Fleury. It was a bad goal for Fleury who really should’ve stopped the puck.

Fleury got off to a poor start and his confidence never had a chance to recover.

Late-season acquisition Dominic Moore put the visitors up 2–0 with a spin-around effort at 14:23 of the first.

The Penguins showed no chemistry and were clearly not well prepared to take it to the Habs. In contrast, Montreal executed their game plan to perfection.

It was more of the same in the early part of the second period as Michael Cammalleri scored his 12th goal of the playoffs to put Montreal up three.

Roughly two minutes after Cammalleri scored, Travis Moen came up with a fine individual effort on the penalty kill to put the Habs up four. That chased Fleury, who had a night to forget.

In came backup Brent Johnson and the Pens settled down.

With the fans in Pittsburgh having nothing to cheer about, the Pens started the comeback. Chris Kunitz and Jordan Staal added goals to bring the Pens within two.

With a 4-on-3 power play at the end of the second period, Montreal needed to respond to shut down the Pens momentum.

The third period was all about a familiar story—Jaroslav Halak stealing the show. The mighty Pittsburgh power play had three opportunities in the third period but Halak stoned Crosby and Evgeni Malkin brilliantly.

The Habs got their chance with the man advantage after Pittsburgh was guilty of too many men on the ice. Gionta capitalized baseball-style, batting in a floating pass from Cammalleri at the side of the net. That was the nail in the Penguins’ coffin.

Halak stopped all 18 shots he faced in the third period and the Canadiens reached the Eastern Conference final.

“It’s great to win in their building,” said Halak.

“The guys did an amazing job tonight. Our power play goals were huge. Everybody deserves the credit. We were down but we didn’t give up.”

The normally stone-faced coach of the Canadiens, Jacques Martin could not hide his smile after the win.

“We showed a lot of character,” he said in an on-ice interview with RDS. “We got excellent leadership throughout the whole series. Give a lot of credit to our centermen playing against Crosby, Malkin, and Staal.”

Gionta, who scored two power play goals, believes his team has a chance at the Cup. “If we keep playing as a team, absolutely,” he told CBC.

“If everybody keeps doing their jobs, I like our chances.”

Shutdown defenseman Hal Gill, who had an icy post-game handshake with Crosby said, “Winning’s fun. It’s nice to shut down this building.”

“We got something good going here. We just want to keep it going.”

The Canadiens don’t know who their next opponent will be yet, as Philadelphia beat Boston 2–1 to force a Game 7 on Friday night in Boston. The Flyers were down 0–3 in this series and could pull off on Friday something only two other teams in NHL history have ever done—coming back to win a series after being down 0–3.

Montreal has unquestionably the most rabid hockey fans in the league. The Bell Center showed the game on a large HD screen and the 21,273 tickets to watch the game there were sold out in one hour.

Pittsburgh’s last game at Mellon Arena ended the way it began in 1967, with a loss to the Montreal Canadiens.

The Montreal Canadiens are the last remaining Canadian team in the NHL playoffs after the Vancouver Canucks were eliminated in six games by the Chicago Blackhawks on Tuesday.