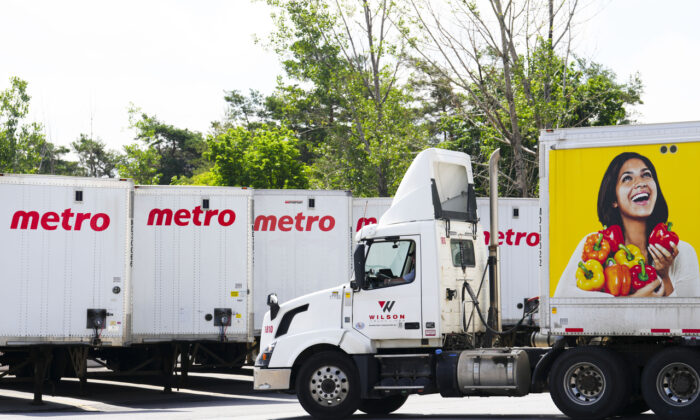 A Metro truck pulls out of the food distribution centre in Ottawa on June 24, 2022. (Sean Kilpatrick/The Canadian Press)
Canada

Canadians Struggle to Buy Groceries Due to Highest Inflation in 39 Years, Study Shows

More than half of Canadians are struggling to pay for household grocery bills as the country faces a 7.7 percent inflation rate, the highest in 39 years, a new Angus Reid Institute (ARI) study shows.

Out of more than 5,000 adult Canadians surveyed, 45 percent said they are worse off now than they were at this time a year ago—the highest rate recorded in the past 12 years, the study said. But more than one-third (34 percent) believe things will get worse in a year from now—also the highest number in more than a decade.

Many factors contributed to this sentiment as Canadians feel the inflationary impacts when paying for groceries, housing, and gas. Cost of living is considered the top provincial issue, with 63 percent of respondents saying so, followed by health care (52 percent) and housing affordability (31 percent).

While some types of goods are more resistant to inflation, food, which saw a 10 percent price surge in May, outruns all other categories, the ARI said.

The study also looked at the impacts on Canadian drivers. Notably, one-in-three (32 percent) of respondents say they’re paying more for gas in the last month, while nearly half (46 percent) say they’re spending less after having changed habits.

More than half (56 percent) say they are spending more time at home to cut down on the cost of driving, while one-in-three (36 percent) have driven further to get cheaper gas. One-in-five of respondents say they’ve opted for public transit, walking, or biking instead of driving.

While some provincial governments have taken steps to alleviate the inflationary pressure, at least two-thirds of Canadians in every province say their respective government has done poorly in dealing with the crisis, the study shows.

The portion of people believing their provincial government did badly in handling the rise in cost of living and inflation was the highest in Newfoundland and Labrador, with 90 percent of people saying so. It is closely followed by New Brunswick at 88 percent, Manitoba at 87 percent, and British Columbia at 81 percent. The number was lowest in Saskatchewan, where 68 percent of people said so.

In light of rising inflation, the Bank of Canada has already raised its key interest rate three times this year, and will likely do so again in July.

Under the current economic climate, the study found Canadians are split on whether to trust the central bank to fulfill one of its four key functions to “keep inflation low, stable and predictable,” as stated in its mandate. Right now, slightly more people still trust (46 percent) the BoC, compared to those who don’t (41 percent).

However, a recent Scotiabank report highlighted the federal government’s “joint responsibility” with the BoC in fighting inflation.

“The Bank of Canada should not be fighting inflation on its own, despite its explicit inflation control mandate,” the author of the Scotiabank report said. “Better coordination of monetary and fiscal policies in Canada could lead to a return of inflation to target with less impact on the private sector.”