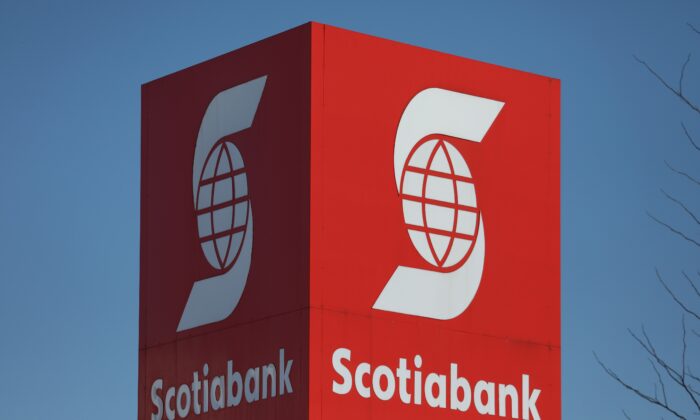 The Bank of Nova Scotia (Scotiabank) logo is seen outside a branch in Ottawa, Ontario, on Feb. 14, 2019. (Chris Wattie/Reuters)
Canada

Canada’s Fiscal Policy-Makers Are ‘Doing Nothing of Significance’ to Slow Inflation: Scotiabank

Reining in government spending could help the Bank of Canada fight surging inflation, lower interest rates, and shift the burden of adjustment away from the private sector and split it more equitably between the public and private sectors, says the Scotiabank.

In the report released June 19, Scotiabank’s chief economist Jean-François Perrault and modelling director Réne Lalonde said the central bank is shouldering the entire burden of curbing high inflation alone, even though inflation is largely induced by the government’s fiscal policies aimed at protecting economies from the COVID-19 pandemic, setbacks from the Russian-Ukraine war, among other inflation drivers.

“At present, the Bank of Canada is shouldering the burden of reducing exceptionally high inflation on its own even though it is clear that much of the increase in inflation since the pandemic stems from fiscal policies in Canada (and elsewhere [in the world]) that were designed to protect firms and households from the economic impacts of the pandemic,” the report said.

“It is fair to say that fiscal policy authorities in Canada are doing nothing of any significance to slow inflation at the moment.”

The central bank aims to keep the annual inflation rate at 2 percent. Currently, it is at a three-decade high of 6.8 percent, according to Statistics Canada.

The authors pointed to the Bank of Canada’s renewed monetary mandate from December 2021, in which it was stated that tackling inflation was the “joint responsibility” of the bank and the federal government.

“The Bank of Canada should not be fighting inflation on its own, despite its explicit inflation control mandate,” they said. “Better coordination of monetary and fiscal policies in Canada could lead to a return of inflation to target with less impact on the private sector.”

The report came as the U.S. Federal Reserve raised a key interest rate by three-quarters of a percentage point last week—a move that economists say the Bank of Canada would likely mirror. On June 1, the BoC raised its policy interest rate by 50 basis points, to 1.5 percent from 1 percent.

The Scotiabank report says it currently forecasts that the Bank of Canada would continue to raise its policy rate to 3 percent by the end of 2022, assuming a cumulative increase in real government consumption of 4.8 percent through 2024. By contrast, a more moderate cumulative increase of 2.5 percent in real government spending through 2024 would allow the central bank to end its tightening cycle with a policy rate of 2.25 percent, the authors said.

Cutting government spending could also shift the burden of policy adjustment that falls disproportionally on the private sector.

“In effect, high levels of fiscal expenditures are necessitating a crowding out of private spending. A less supportive fiscal policy would take some adjustment burden away from the private sector, but also have a much more immediate impact on inflation,” the report said.

“Doing so would allow the Bank of Canada, and central banks elsewhere, to reduce the total amount of rate increases required and shift the burden of adjustment from being entirely borne by the private sector to one that is more equitably split between the private and public sectors. It seems clear to us that a more coordinated approach to managing the inflation shock is necessary and desirable.”

The authors noted that while several provinces are putting measures in place to help offset some of the financial pressure of high inflation on households, those measures actually put more upward pressure on inflation.

They also noted the political difficulties for the government to identify which areas in which to cut expenditures, particularly when some types of spendings are beneficial for economic growth.

“We would not advocate a slash and burn approach but careful and targeted reductions in spending,” the authors said.

“The simple reality is that firms and households are going to be making trade-offs as they incorporate higher inflation and financing costs in their budgets. It seems unreasonable for governments not to do the same and in so doing reduce the adjustment required by the private sector.”