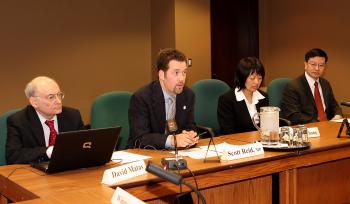 Matthew Little
Matthew Little is a multi-media reporter for The Epoch Times.
View profile
Follow
biggersmaller
Print
OTTAWA—Members of Parliament, witnesses, and concerned people gathered on Wednesday at a forum on Parliament Hill to explore the ongoing tragedy in China where half the people in forced labour camps are Falun Gong practitioners imprisoned for their belief.

Mr. Reid noted that 2009 is the tenth anniversary of the start of the persecution of Falun Gong in China.

Falun Gong, also called Falun Dafa, is a traditional Chinese discipline of exercise and meditation that centres on the principles of “Truth, Compassion, and Forbearance.”

In July 1999 the communist regime launched a massive persecution campaign against the group. At the time government estimates indicated that in the seven years following its introduction to the public in 1992, 70 to 100 million people were practising Falun Gong in China, drawn by its benefits of physical and mental health.

Mr. Reid paid tribute to the practitioners of Falun Gong who have “persevered this long and indeed in ways that the state cannot touch…. They’ve prospered despite the persecution.”

Michelle Zhang told how her family in China, almost all of whom practised Falun Gong, endured ongoing persecution.

“I never imagined that I would have lost three of my most beloved family members within a few years,” she said.

Shortly after Falun Gong was banned in 1999, Ms. Zhang’s brother-in-law, Songtao Zou, was detained for appealing to the Beijing Central Petition Office for his constitutional right to practise the spiritual discipline.

Eventually released, he was detained twice more and died in prison in November 2000. Without asking the family’s permission, prison authorities cremated his body.

Ms. Zhang’s sister, Yunhe, was forced to leave home to escape arrest. As a result of distress over her family tragedy, Ms. Zhang’s mother’s health deteriorated and she died the following year.

Yunhe later disappeared after being arrested. Police denied detaining her and Ms. Zhang is now almost certain her sister is one of the estimated 41,500 Falun Gong practitioners believed to have been killed for their organs.

The details of that gruesome practice were uncovered by two of the forum’s other speakers, David Matas, a Member of the Order of Canada and one of Canada’s foremost human rights lawyers; and David Kilgour, a former MP and Secretary of State for Asia Pacific.

Mr. Kilgour and Mr. Matas launched an investigation in 2006 and have released a report confirming allegations that the Chinese regime is using Falun Gong prisoners of conscience as a live organ bank to supply an illicit trade in human organs.

Mr. Matas discussed China’s notorious labour camp system, a vast network of prisons where detainees work up to 16 hours a day making products from chopsticks to patchwork comforters that are often exported to developed countries including Canada.

While forced labour is illegal according to China’s laws, Mr. Matas said such laws are only a smokescreen to rebuff criticism.

“There is no way to get the government of China to respect its constitution,” he said referring to freedom of religion as one of the rights Chinese people have on paper but do not have in reality.

Mr. Matas quoted a 2007 U.S. State Department report that said as many as half of China’s quarter million labour camp prisoners were Falun Gong practitioners.

“The worst forms of human rights abuses are those which are economically sustainable. Abusing human rights on a mass scale is an immense proposition. It requires a lot of money and vast resources and therefore it can only be perpetuated in the long term when it becomes self-financing. That was certainly the key of the SS system that was used to exploit and profitably destroy the Jewish population.”

An all-party group of MPs sponsored the event. In addition to Conservative MP Mr. Reid, the group was made up of Irwin Cotler, Special Counsel on Human Rights and International Justice for the Liberal Party; Wayne Marston, Human Rights Critic for the New Democratic Party; and Diane Bourgeois of the Bloc Québécois.

Also in attendance were Peter Kent, Minster of State of Foreign Affairs (Americas); and Keith Martin, Parliamentary Secretary to the Minister of National Defence.

Yufei Song, who began practising Falun Gong in China in 1997 while doing her Master’s degree, shared her story of 16 months in a forced labour camp where she made disposable chopsticks and Motorola V70 mobile phone promotion brochures. She also made candles for export to Germany and said the experience greyed her hair at only 29.

Ms. Song said the ongoing torture drove many practitioners to the edge of physical and mental collapse.

When she got out of prison, she found her company had fired her and under pressure her husband had divorced her.

Winston Liu, now living in Calgary, was sentenced to three years in a labour camp, during which he was beaten and tortured repeatedly.

“The police told me they would try to drive me insane if I continued practising,” recounted Mr. Liu. One method they used was electric batons, a torture instrument many Falun Gong practitioners report being subjected to while imprisoned.

Mr. Liu’s wife was sentenced to 12 years and he hasn’t been able to speak to her since he came to Canada in 2005 to study at the University of Calgary.

Mr. Kilgour talked about the persecution of Falun Gong and the 1989 massacre at Tiananmen Square which marks its 20th anniversary next week.

He said both these issues, as well as Chinese labour camps, were “haunting testimonials” against the totalitarian regime running China and its “carnivore economics.”

He noted that Mao Zedong, the first communist ruler in China, modelled his labour camps on those in Stalinist Russia and Nazi Germany.

But the persecution of Falun Gong has led to at least one positive outcome: practitioners’ attempts to break through China’s Big Brother Internet have led to the world’s largest and most successful effort to free the Internet in repressive countries.

That effort was detailed by Shiyu Zhou, deputy director of the Global Internet Freedom Consortium (GIFC), which has been running the world’s largest anti-censorship operation since 2000.

While the Internet was to be a liberating force in communist China, the ruling regime co-opted North American companies including Cisco and Nortel to create an Internet that is fully censored and monitored.

That censorship led to a small but dedicated group of Falun Gong practitioners developing a set of anti-censorship technologies.

These cheap-to-run tools are “the world’s largest and the only scalable anti-censorship infrastructure,” said Mr. Zhou, meaning the capacity of that infrastructure can grow to meet demand.

He said an estimated 95 percent of the total anti-censorship traffic in closed societies around the world is using this software. The tools are being used by citizens in repressive regimes including Algeria, Iran, Russia, Zimbabwe, and dozens more.

“During the democratic movement in Burma in late August 2007, we experienced a three-fold increase in average daily hits from IP addresses originating inside Burma.”The number of users there went from hundreds of thousands a day to over six million.

“Our Internet anti-censorship services have the potential of transforming closed societies in a peaceful but powerful way that must not be underestimated.”

Mr. Zhou said the demand for the consortium’s technology has been skyrocketing and has far surpassed GIFC’s resources to provide it.

And while it is a great success and costs little, the regimes the group is contending with, such as Iran and China, have almost limitless resources.

“Dictatorships like China and Iran are spending billions on their Firewalls and cyber-attacks upon the West.  How much is the West spending combating this cyber threat?  Not nearly enough,” said Mr. Zhou.