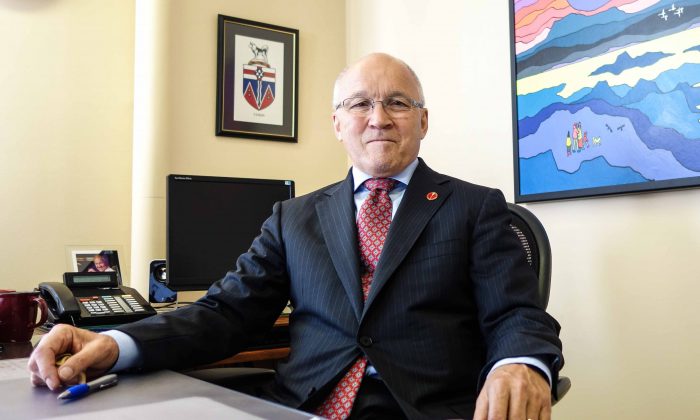 Sen. Daniel Lang, chairman of the Standing Committee on National Security and Defense, said it’s time for Canada to sit down with the United States and talk about joining Ballistic Missile Defense. (Matthew Little/Epoch Times)
Canada

OTTAWA, Canada—Canada could be coming full circle on the U.S. Ballistic Missile Defense (BMD) after the Canadian Senate’s defense committee recommended joining the program in a report Monday night.

In 2004 the Canadian government had planned to join BMD but backed out in early 2005 after the plan attracted fierce criticism.

At the time, critics in Canada said BMD would spark a new arms race and wasn’t a reliable way to neutralize nuclear threats. They argued Canada was better off outside the program, and would be less of a target to enemies of the United States.

Two former Canadian defense ministers involved in those decisions told the Senate committee that they had wanted Canada to join the program at the time, and the government made a political decision to back out after opposition grew.

But the world is a different place now, said the Senate defense committee chairman Daniel Lang. Countries like North Korea and Iran are pursuing nuclear strike capabilities, Russia has invaded Crimea, and China is stirring up tensions in the South China Sea.

“Canadians are very much aware that the world has become a smaller place. We are in a very difficult period in history if you take a look at the number of conflicts that are taking place around the world,” said Lang.

The government came under fire for the Senate’s report on Tuesday when the official opposition party questioned what the cost of joining the program would be.

The Canadian government hasn’t officially responded to the report as of yet, but Defense Minister Rob Nicholson defended the report and said it was published with support from all members of the committee.

Canada is already participating in many related aspects of BMD, including tracking airspace as part of its role in NORAD (North American Aerospace Defense Command) and other operations related to NATO (North Atlantic Treaty Organization).

The report notes the contradiction in Canadian foreign policy. On the one hand, it supports NATO allies being protected by BMD, but does not take that position for Canada itself.

Lang said the committee heard from American experts that the United States was puzzled when Canada withdrew from the program in 2005.

“Our American counterparts viewed it from the perspective of ‘Why are you not becoming fully involved in this particular aspect of NORAD—because you are involved in everything else?’ I think it was a fair question for the Americans to ask. But the reality of it is, it was the consequence of domestic politics of the day.”

Lang rejects the suggestion that Canada can stay clear of a nuclear assault by keeping itself out of U.S. military interventions and programs like BMD.

“I think, quite frankly, that that is being naive.”