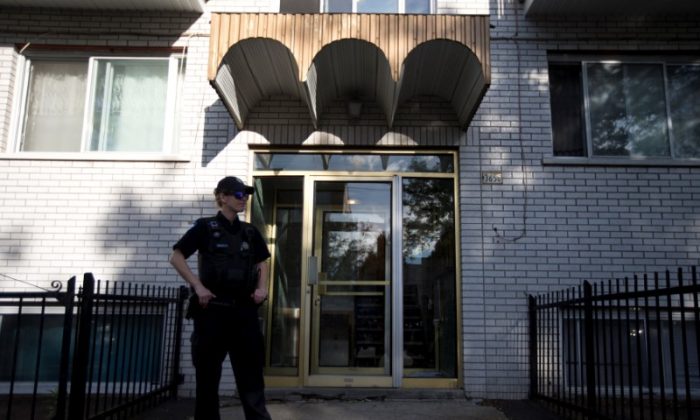 A police officer stands outside the home of Amor Ftouhi, in Montreal, Quebec, Canada on June 21, 2017. (REUTERS/Christinne Muschi)
International

Police in Montreal, Canada, have raided the home of Amor M. Ftouhi, 49, now in custody for the stabbing of a police officer at Bishop International Airport in Flint, Michigan, on Wednesday, June 21.

Canadian and U.S. authorities are conducting a joint investigation into the stabbing, which left police Lt. Jeff Neville in critical condition. He is now listed as stable.

Ftouhi allegedly stabbed Neville in the neck with a long knife, and shouted “Allahu akbar” (“God is great”) during the attack.

There are also reports that he said something to the effect of “You have killed people in Syria, Iraq, and Afghanistan, and we are all going to die.”

The FBI, which is leading the investigation, said it believes it to be an isolated incident.

“We currently have no specific, credible information that there is a threat to the Flint community,” reads and FBI statement on the attack.

U.S. Attorney General Jeff Sessions said the attack is being investigated as an act of terrorism.

“Our prayers are with the officer and his family for a full recovery,” said Sessions.

The FBI said Ftouhi crossed into the United States on June 16 at Lake Champlain, N.Y. He then traveled to the Flint airport on Wednesday morning and wandered about the airport for some time before the stabbing.

Ftouhi faces 20 years in prison under a charge of violence at an international airport.

Police there have not announced any discoveries from the raid.

Canada Public Safety Minister Ralph Goodale said authorities from Canada and the United States have a well-established ability to work together in such investigations.

Ftouhi came to Canada from Tunisia.