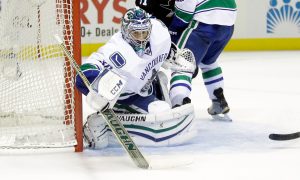 Could This Be the Year a Canadian Team Wins the Stanley Cup?
0
Share Now
TelegramFacebookTweetEmailTellMeWeReddit
Copy Link Michael Frolik celebrates his goal against the Dallas Stars at American Airlines Center on Jan. 15, 2015 in Dallas, Texas. The Winnipeg Jets play in the toughest division in the NHL and are on pace to make the playoffs. (Ronald Martinez/Getty)
Canadian Content

Canadian NHL Teams and the Stretch Run to the Playoffs

So now that the All-Star festivities are firmly in the rear-view mirror, it’s time for some real hockey as most teams focus on the stretch run to the NHL playoffs.

For the seven Canadian teams, three—Montreal, Vancouver, and Winnipeg—appear to be in good shape to make the playoffs, one—Calgary—is right on the bubble, two—Ottawa and Toronto—face mountains to climb, and another one—Edmonton—should be focusing on the Connor McDavid sweepstakes.

With just over half the season gone and based on the standings at the time of the All-Star game, it looks promising to see four Canadian teams reach the playoffs. Four would equal the most that have made it in a season going back to 2005-06—the first season after the 2004-05 season was completely lost to a lockout.

Here’s a quick rundown for the seven Canadian teams:

Montreal – On pace for 111 points and first place in Atlantic Division and second place in the Eastern Conference (behind the New York Islanders). Compared to their average point total of the last eight full seasons since the 2004-05 lockout, Montreal’s point pace is 18 better.

Ottawa – On pace for 84 points; to reach the average minimum point total needed in the Eastern Conference over the last eight full seasons to make the playoffs (92), the Senators would need to go 22–13–1 in their remaining 36 games. Of course, reaching 92 points in the Eastern Conference is no guarantee of reaching the playoffs. Currently, Boston is on pace for 97 points and the final wildcard spot. The Sens are on pace to finish nine points worse than the average of their last eight full seasons.

Toronto – On pace for 80 points and needing to go 22–11–1 to reach 92 points. The Leafs are on pace to finish three points worse than the average of the last eight full seasons.

Winnipeg – On pace to finish with 103 points and the first wildcard spot in the Western Conference. The Jets are the biggest surprise of the Canadian teams—on pace to finish 19 points ahead of their last eight full seasons’ average (including Atlanta Thrashers).

Calgary – On pace to finish with 92 points and the final wildcard spot in the West. The Flames need to go 20–14–1 to reach 94 points, the average minimum point total needed to make the playoffs since the 2004-05 lockout in the Western Conference. Calgary is on pace for a totally average season when compared with their past eight years, although it does feel like progress has been made this year.

Edmonton – On pace to finish with 58 points and second worst in the league ahead of Buffalo (54). To reach 94 points, the Oilers would need to finish the season 30–4–1! The Oil are underachieving by 18 points when compared with their last eight seasons, which is truly disappointing. But they might get their fourth first overall pick in six years, which could be Connor McDavid.

Vancouver – On pace to finish with 100 points and second place in the Pacific Division. Like the Flames, the Canucks are on pace for a totally average season by their impressive standards of the last eight seasons.