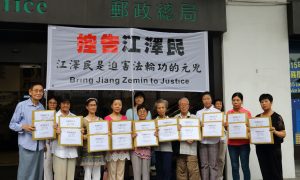 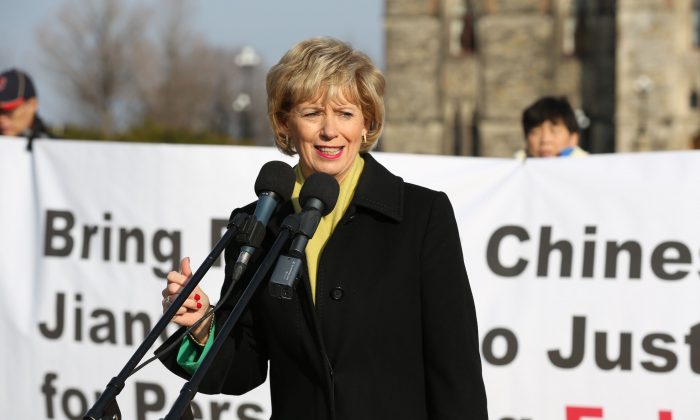 Liberal MP Judy Sgro was one of severl MPs who attened a rally on Parliament Hill on Dec. 9, 2015, and spoke in support of ending the campaign of persecution agains Falun Gong practitioners in China that was launched in 1999. (Evan Ning/Epoch Times)
Canada

PARLIAMENT HILL—Some 700 people gathered on Parliament Hill on Dec. 9, the eve of Human Rights Day, to deliver 95,000 petition signatures to Prime Minister Justin Trudeau and to urge his government to pressure China to end the campaign of persecution of Falun Gong.

Several MPs came out to lend their voices and sometimes profound insights to the cause.

Liberal MP Judy Sgro brought greetings on behalf of Prime Minister Trudeau and told the crowd that the PM had taken up their concerns.

In doing so, Trudeau joins his predecessors, Jean Chretien, Paul Martin, and Stephen Harper, who all raised the Falun Gong issue with the Chinese regime.

Sgro encouraged the practitioners to keep up their efforts.

“I know sometimes you get discouraged because some of the persecution continues to happen in China. But you must keep strong and keep doing what you are doing.”

“They believe that this natural process of free-thinking undermines social and political stability. But free, unfettered contemplation is essential to the human experience,” he said.

“As long as the government seeks to reduce their citizens to something less than human, they will always be insecure because men and women will look into their own minds and hearts and recognize that they were made for something more.”

Liberal MP Borys Wrzesnewskyj, who tabled the first bill in Parliament (former Liberal MP Irwin Cotler filed a similar bill as well) to stop Canadians from going to China for organ transplants, said he would introduce such legislation again.

Forced organ harvesting must be stopped in China, he said.

“Let’s call this for what it is—a horrific example of state cannibalism.”

Conservative MP Michael Cooper said it was a privilege to stand beside people defending principles like truthfulness, compassion, and tolerance.

Conservative MP and former environment minister Peter Kent chairs the parliamentary Friends of Falun Gong and has made efforts to get other MPs as well as the Prime Minister to pay attention to the plight of Falun Gong practitioners in China.

“It is a real honour to be with you again,” he said.

Cotler, a former minister of justice and attorney general, called on Chinese authorities to end the persecution of Falun Gong and “end the practice of the forced and illegal organ harvesting … and which was condemned unanimously by our foreign affairs subcommittee of international human rights.”

Conservative MP Scott Reid, who raised Falun Gong in his first intervention as an MP in 2001, said he has always been struck by the non-violent response of Falun Gong practitioners in the face of such persecution.

“What we say when we speak in support of you is nothing compared to the example that so many Falun Gong practitioners have demonstrated through their actions.”

“Your bravery and courage have proven insurmountable and in the face of adversity you have not wavered from your belief and of the promotion of human rights,” he wrote.

Former Progressive Conservative and Liberal MP David Kilgour said he and all the other speakers were deeply touched by how Falun Gong practitioners have withstood persecution in China.

Kilgour, one of the first people to investigate live organ harvesting from Falun Gong prisoners of conscience in China, said others have carried out their own investigations and found similar results.

“Organ harvesting began with Uyghur political prisoners and then probably expanded to Tibetans and members of Christian house churches in China. But the persecution of Falun Gong for the first time flooded the labour camps with masses of healthy, exploitable, and very vulnerable people, men and women.”