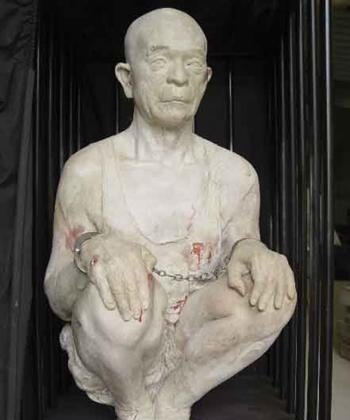 Artist Prof. Kunlun Zhang's sculpture of torture he suffered at the hands of the Chinese officials. Prof. Kunlun, a Canadian citizen, spent three months detained and persecuted in China before he was rescued back to Canada with the help of the Canadian government. (www.zhengjian.org)
US

In a Toronto courtroom today, a lawyer will be asking a judge to allow Canadians to seek justice in Canada for deeds inflicted on them in the darkness of China.

The judge will be asked to rule on whether foreign officials, in this case the former president of China's ruling communist regime among others, can keep immunity for acts of torture carried out against Canadians and people who have now come to Canada.

A group of six Falun Gong practitioners, including a Canadian citizen and five Ontario residents, filed a lawsuit in the Ontario Superior Court in Nov. 2004, suing former Chinese leader Jiang Zemin and four senior officials with torture. The plaintiffs are seeking CA$20 million (US$19.5 million) in damages.

Three of the plaintiffs, a structural engineer, an art professor, and an accountant, were released from prison after Amnesty International took up their cause and publicized their cases. Professor Kunlun Zhang, a Canadian citizen, had returned to China to care for an ill relative and was arrested for practicing Falun Gong meditation exercises in a public park, according to information released to the media.

Zhang was tortured with electric shocks and denied sleep, and forced to squat in small cell while he underwent forced brainwashing, he said.

Although the defendants have ignored the lawsuit, a group called the All China Lawyers Association intervened to argue that the officials are entitled to immunity. The plaintiffs have argued the group is acting directly on the Chinese regime's behalf. The Canadian Centre for International Justice (CCIJ) and Amnesty International Canada (AI Canada) are intervening to ask the court to refuse immunity to the defendants and allow the case to proceed.

Falun Gong is a meditation system that was practiced publicly in China from its introduction in 1992 until then-leader Jiang issued a ban in 1999 that practitioners say was the start of a brutal campaign of persecution.

At the time the case was filed, there were over 1,100 documented deaths of Falun Gong practitioners in China. Today the number is over 3,300. Untold tens of thousands more unconfirmed deaths are believed to have occurred, many for a gruesome trade in human organs.

Last November, Irwin Cotler, the former minister of Justice and attorney general of Canada, introduced a private member's bill aimed at guaranteeing such cases could move forward by eliminating state immunity for crimes against humanity, genocide, and torture so that victims of these crimes could seek redress in Canadian courts.

While criminal prosecutions in such cases can be carried out only by the attorney general, civil cases could be filed by individual Canadians in cases where justice could not be pursued in other courts.

The hearing is expected to last two days. It follows a similar lawsuit filed in Montreal by the son of slain Canadian citizen Zahra Kazemi, who was tortured to death in Iran in 2003.