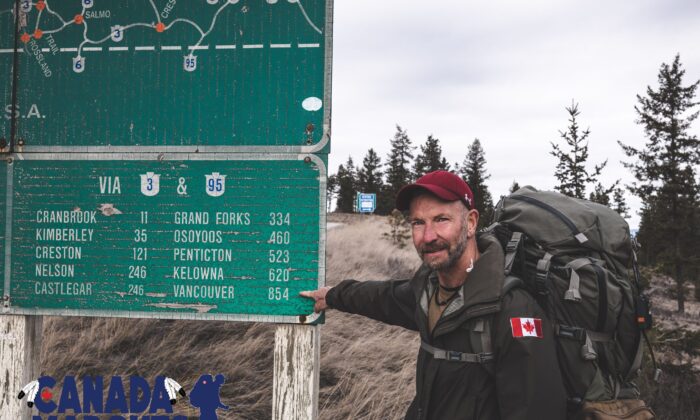 As he makes his way through British Columbia, James Topp points to how many kilometers he has covered thus far on his walk to Ottawa in protest of COVID-19 mandates. (Courtesy of Logan Murphy)
Canada

When Canadian Armed Forces veteran James Topp and his small crew strolled into the southern Alberta municipality of Fort MacLeod on March 31, they reached a significant milestone on their journey to Ottawa to protest government mandates and an erosion of Canadian freedoms: 1,000 kilometres.

Topp launched his Canada Marches movement on Feb. 20 at the Terry Fox Plaza in Vancouver, the plan being to travel the 4,293 kilometres to the nation’s capital all on foot “in peaceful protest against government mandates trampling personal freedoms,” according to his website.

Rotating between five pairs of shoes during the past 43 days, outside of the rare blister the journey has been rewarding and fruitful and the support has been overwhelming, he said.

“Along the way, we’ve gotten such support,” Topp told The Epoch Times. “Folks have opened their homes to us where they’ve got space that had enough room for us. There were a couple of towns where we slept in a church basement. All the support from people, it’s been amazing.”

Rachelle Roy was one of those supporters. In the tiny hamlet of Yahk, B.C., a community of less than 200 people, Roy runs The Hog Pen, a Bunk-A-Biker layover for travellers who need a rest before moving on to the next city.

Roy and her husband took care of the Canada Marches team for two nights, feeding them breakfasts and dinners and getting their laundry done. For her, this was the least she could do.

“I like what James is doing, and all my life I’ve always believed you help people who do things for people, to unify,” Roy told The Epoch Times. “In the last couple of years, I’ve seen so many people divided, [Topp’s team] just touched my heart. Unite the people. I love what they’re doing.”

Working as a civilian in an RCMP detachment, Topp was forced into “leave without pay” after he chose to avoid taking a COVID-19 vaccine. His dismissal from the Canadian Armed Forces where he served 28 years, most recently as a reservist, is imminent for the same reason.

Surrounded by colleagues he said didn’t want to be vaccinated but felt pressured to do so to stay employed, Topp was motivated to do some form of activism to speak on their behalf, as well as his own, which is how the Canada Marches movement began.

“I’m speaking now for the folks like me who have lost their jobs, and I’m also speaking for those in the RCMP, public servants, and the armed forces that only took [COVID vaccines] because they were afraid of losing their job,” he said.

“We’re trying to bring together Canadians, because we’ve been fractured and divided for two years.”

Visibility of his protest walk across the country is growing, Topp said, despite getting no coverage from traditional legacy media. Canadians who have heard about him have used their own platforms and social media channels to build a following, which has led to crowds meeting the team at designated stops or joining them during their march on the highways.

One follower who connected with Topp in Castlegar, B.C., and has walked with him since, is photographer Logan Murphy. A former Canadian military infantryman himself, Murphy has travelled throughout Canada and into the United States during the past 18 months to follow the growing activism against government restrictions and overreach. His mission now is to chronicle Topp’s trek with up to 100,000 pictures, and to be in Ottawa when the Canada Marches team arrives, where he expects they will be met with an overwhelming flood of support.

“Outside Ottawa, there could potentially be tens of thousands of people just lined up on the sides of the roads while he marches by, and I think James is going to be able to control such a crowd because he has just walked the miles and people are going to respect that kind of thing,” Murphy said in an interview.

“It’s going to yield some presentation of Canadian spirit I think we’ve never seen before. And in this world of malicious media, I feel compelled to be with James the whole way to defend him. When somebody like James comes out and does what he does, make an announcement in uniform and use it as a tool and engage in protest, I’m all over that right to help my brothers in arms.”

Dan Jones has been marching with Topp from day one, although initially he wasn’t sure if he had the strength to make it. However, despite an early injury from poor-quality boots, Jones has met the challenge and continues to be inspired by the people who come out to commend the troupe.

“The people we have met along the way are absolutely amazing and the generosity is just overwhelming,” he said. “The people I meet are giving me more and more resolve and I’m here for everybody that can’t do this. And this needs to be done.”

With one-quarter of the journey completed, Topp is still waiting for his first contact with somebody in government. He has started a campaign to write letters to members of Parliament explaining his protest and has encouraged his supporters to join him.

“Part of my strategy is writing letters and I’m going to mail some off this weekend,” he said. “I’m anticipating there may be some response after that letter goes out, or possibly not. I know the political landscape right now is kind of barren of real leadership and courage, but I’m making it public. So if I get to Ottawa after a four-month journey and I’m totally ignored, I expect to present that to the Canadian public.”

Topp has created the website www.canadamarches.ca to document his movement, log inspirational stories, and allow people to follow his journey. He has also developed some merchandise people can buy to help support the trek, which will end at the Tomb of the Unknown Soldier at the National War Memorial in Ottawa, likely in mid-June.