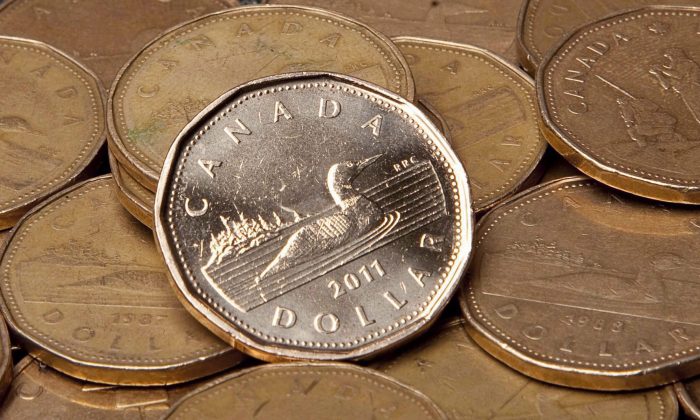 The Canadian dollar has been on a steady climb since the end of 2016, while the price of oil is little changed. (The Canadian Press/Jonathan Hayward)
Business

The Canadian dollar appears to be a boring currency, but its recent strength is a bit surprising and worrisome for economic growth, analysts say.

Since the U.S. election, the Canadian dollar has been outperforming the euro, the yen, the pound sterling, the Australian dollar, and the Mexican peso. It’s a conundrum given what usually drives the loonie’s value.

“If you look at what oil prices have been doing this year and you look at interest rate spreads with the U.S., yes you should be surprised at what’s going on because the loonie has basically gone in the other direction,” said National Bank senior economist Krishen Rangasamy in a phone interview.

Everything is relative with currencies. Their values are tied to the differences in short-term interest rates between the two reference countries. Recently, as the U.S. two-year bond yield has risen faster than the Canadian two-year bond yield, one would expect the prospect of earning a higher interest rate to make money gravitate to the United States at Canada’s expense, therefore weakening the loonie relative to the greenback.

But there are many factors that influence the value of a currency, and the price of oil, which has historically been a critical factor for the loonie, has been particularly less influential of late.

The correlation—a measure of the similarity in movement between two variables— between the loonie and the price of West Texas Intermediate (WTI) oil has fallen sharply in 2017. The loonie is not acting like a “petro dollar.”

While Scotiabank foreign exchange strategist Shaun Osborne doesn’t like the petro dollar term, he said in a phone interview that correlations ebb and flow, but that the relative strength of the Canadian dollar is a little bit surprising given what the fundamental story for Canada is—divergent monetary policy from and weaker growth relative to the United States.

The divergence in monetary policy could be growing with expectations building for the Federal Reserve to raise interest rates in the United States up to three times in 2017, while the Bank of Canada is expected to be on hold until 2018.

“I think the message from the Bank [of Canada] has been pretty clear that they don’t necessarily view that the broader strength of the Canadian dollar is justified at this point and they keep referring back to the divergence in monetary policy as something that is likely to weaken the Canadian dollar going forward,” Osborne said.

There are things that make Canada quite attractive to the international investor’s point of view.
— Shaun Osborne, Foreign Exchange Strategy, Scotiabank

In a recent speech, Bank of Canada governor Stephen Poloz called the currency’s strength “premature” given how far the Canadian economy is from reaching its potential.

But the strength of economic data in Canada recently—most notably the growth in jobs—is one reason for the loonie’s strength, according to Osborne. Job growth averaged 30K per month during the fourth quarter and the unemployment rate fell to 6.8 percent in January.

Another factor driving up the loonie’s value is the rising trend of foreign ownership of Canadian assets, whether they are hard assets or financial assets like stocks and bonds. This trend has been hard to gauge since the data is not available in a timely way, said Rangasamy.

“There are things that make Canada quite attractive to the international investor’s point of view,” Osborn said. Canada is a stable country politically, rule of law is observed, and its stable AAA credit rating has fewer and fewer rivals.

Rangasamy said 2016 saw record portfolio inflows into stocks and bonds, but that may cool off. “Our own view is that this is going to taper down because it’s hard to maintain that pace of buying by foreigners. But maybe that strength has extended to early 2017,” he said.

Rangasamy noted that short-term investors—speculators—are now holding net long positions in the Canadian dollar for the first time since September.

The loonie isn’t exactly screaming higher like the stock market, but its recent strength won’t be welcome by exporters and the Bank of Canada.

The Canadian economy has relied on domestic demand for many years, notably consumer spending on housing. But homeowners are highly in debt and that can limit their ability to keep consuming.

“What seems to be the way forward for Canada is for exports to take over the baton and for consumers to basically pay down their debt,” Rangasamy said. “So that’s why everybody’s counting on exports and that’s why we need a more competitive Canadian dollar.

“If the Canadian dollar stays where it is, that’s not good for us,” Rangasamy said.

Many analysts expect the loonie to weaken toward the US$0.73 level in six months time.