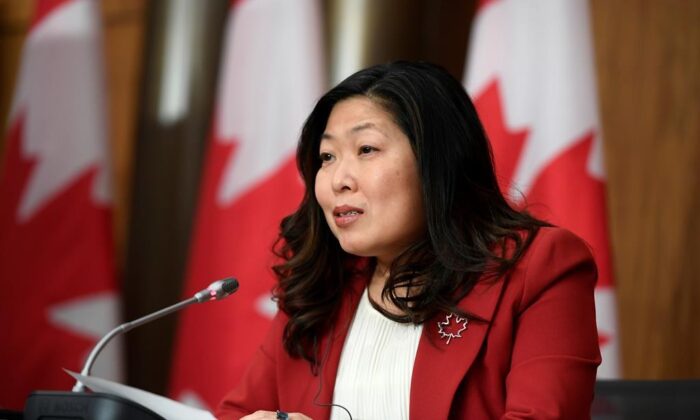 A Canadian delegation is visiting Washington this week to meet with officials over a number of protectionist measures to be adopted by the United States, just weeks after leaders of the the two countries met at the North American leaders’ summit.

Global Affairs Canada (GAC) says the delegation will meet with congressional leaders and stakeholders from Dec. 1 to Dec. 3 to discuss Buy American protectionist measures recently passed in the House of Representatives, as well as a rise in tariffs on Canadian softwood lumber and trade challenges facing potato exports.

The Liberal government and Trade Minister Mary Ng have drawn fire from opposition parties in the House of Commons in recent days, who say trade relations between Canada and its biggest trading partner are deteriorating.

“On Nov. 18, the prime minister was at the Three Amigos summit. We would expect a relationship between ‘amigos’ to be frank and sincere, not complacent and weak,” Bloc leader Yves-François Blanchet said during question period on Nov. 30.

“On Nov. 24, the United States doubled its punitive duties on Canadian softwood lumber. I have a simple question for the prime minister: What did they talk about?”

Prime Minister Justin Trudeau replied that meetings with the United States during the summit covered “a lot of issues that are important to Canadians” including “COVID-19, cars, softwood lumber, and potatoes.”

“We talked about all kinds of mutual interests that we are going to be able to work on together and settle our disputes,” Trudeau said.

The delegation will include members of the opposition, including Conservative shadow minister for international trade Randy Hoback. He said in a statement he’s heading to Washington to “begin the work of rebuilding our relationship in order to secure Canadian jobs.”

Geoffrey Hale, a political science professor at the University of Lethbridge, says the North American leaders’ summit was “more political theatre than a substantive alignment of policies.”

“The reality is that Mr. Biden is in significant domestic political difficulty, and when that happens, domestic policy will normally trump bilateral relations with either Canada or Mexico,” he told The Epoch Times.

Before the trip on Nov. 30, Ng had a virtual meeting with Katherine Tai, the U.S. trade representative.

Ng brought up “Canada’s continued significant concern with the discriminatory, protectionist elements of the U.S. tax credits for electric vehicles” in the Build Back Better bill passed by the House of Representatives on Nov. 19, according to a statement.

The massive US$1.75 trillion spending bill could be voted on in the Senate before Christmas, but its passing is not assured due to reluctance from two Democrat senators.

Ng also discussed softwood lumber tariffs with Tai, and the issue of the blocking of export of potatoes from Prince Edward Island to the United States due to concerns about fungus.

On Nov. 25, Ng and Industry Minister François-Philippe Champagne met with leaders from the business, automotive, and labour sectors to discuss U.S. protectionism concerns.

The ministers “committed to continuing advocacy directly with their counterparts, the U.S administration and Congress” and to work as “Team Canada” with the industry, according to a statement.

Representatives from the Canadian Steel Producers Association (CSPA) who attended the meeting said the CSPA concerned about a host of U.S. protectionist measures in the Build Back Better bill, such as building with “made in USA” steel and the electric vehicle tax credit.

“We believe the U.S. must reconsider its position on Canadian suppliers on the basis of the mutual economic benefits we gain from the strength of our integration,” said Catherine Cobden, president and CEO of CSPA.