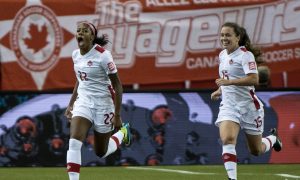 Call it a success, but just not an overwhelming one.

Canada pulled it off without a hitch—hosting the FIFA Women’s World Cup tournament across five time zones. It turned into the largest single sporting event for women in the world.

“Our belief is that there was flawless execution and organization for this competition,” stated Peter Montopoli at the closing press conference in Vancouver on July 3. Montopoli is Chief Executive Officer of the National Organizing Committee and Canada Soccer General Secretary.

“Everything from a team perspective was handled in a flawless manner. We’re talking about five time zones.”

It couldn’t have been done without the more than 2,100 volunteers putting in over 80,000 hours of work.

A big component of overall success is the development of women in leadership positions; 65 percent of staff was women. Pulling off the feat of hosting the FIFA Women’s World Cup bodes well for Canada’s ability to host future large events.

Another criterion for success was, of course, attendance. The goal of getting 1.5 million spectators to attend the tournament was 90 percent reached.

“I think anytime you reach 90 percent of anything, you’re pretty successful in life.” Montopoli estimated 1.35 million spectators will have attended the tournament after the third-place and final matches. The tournament already set a record for best-attended FIFA tournament excluding Men’s World Cups.

What will dog Canada’s hosting is the use of artificial turf for all the games. The biggest flaw with the turf is its inability to handle the heat well. During the England vs. Norway Round of 16 game in Ottawa, the temperature on the pitch reportedly soared to 130F (nearly 55C) when the actual air temperature was “only” 79F (27C).

“We will do a survey with coaches and players,” said Tatjana Haenni, FIFA Deputy Director of the Competitions Division and Head of Women’s Football. “I don’t think right now is the time to do it. The heat is obviously one we have to look into it.”

The Women’s World Cup won’t have that heat intensification problem in France in four year’s time when all the game will be played on natural grass surfaces.

Canada finished sixth out of 24 teams after finishing dead last out of 16 teams four years ago in Germany. Without question, reaching the quarterfinals is a great result, but failing to beat England, a team it had beaten just eight days prior to the start of the competition due to avoidable errors is hard to stomach.

“It’s been a difficult pill to swallow,” said Victor Montagliani, Chair of the National Organizing Committee and Canada Soccer President. “They’re very disappointed. The team did get better as the tournament went on,” Montagliani said.

Everything from a team perspective was handled in a flawless manner.
— Peter Montopoli, Canada Soccer General Secretary
Nevertheless, the progress Canadian women have made in football recently is undeniable. Montopoli pointed out Canada is the only country to have qualified for and reached the knockout stage of the most recent under-17, under-20, and Women’s World Cups.

As for hosting a Men’s World Cup, Canada will review the bid guidelines when they come out. It has hosted every other major FIFA tournament. “We’ve proven that we can be a great host,” said Montopoli.

But for now, Canada Soccer has to “take care of your own house,” as Montagliani put it. To continue the momentum, Canada needs to now look internally and do a lot of the little things such as governance and player development to sustain the success from this.

“More Flemings more often,” is how Montagliani sums up where player development needs to go. Canada needs to develop very technical players, like 17-year-old Jessie Fleming, to keep pace with the better teams in the world and the ever-improving standard of the women’s game.

And the marketing of women’s football has some catching up to do with the product on the pitch. Greater sponsorship is needed to take the women’s game to the next level.

“It needs to be self-sustainable, which is really difficult,” Haenni said. More work is needed from associations of clubs; in many countries a change in the perception of women’s football is needed. Former players need to be given career opportunities. “It’s a question of time,” Haenni said.

While much more work remains to be done to grow the women’s game, it clearly has established a strong foothold in Canada, a country that has been an early adopter and leader.