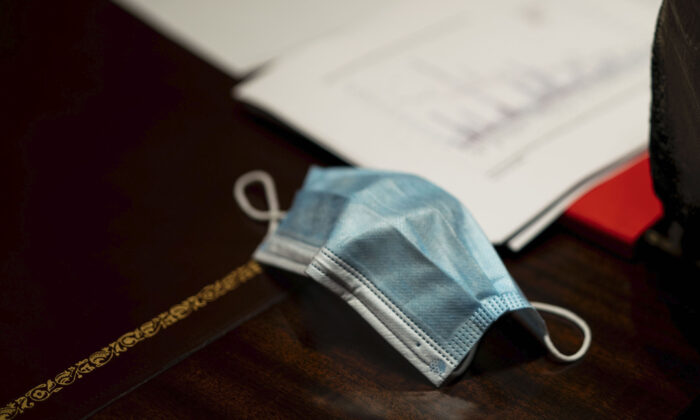 A mask is placed on the table during a meeting between then-President Donald Trump, Arkansas Gov. Asa Hutchinson and Kansas Gov. Laura Kelly in the Cabinet Room of the White House in Washington, on May 20, 2020. (Doug Mills/Pool/Getty Images)
By Tom Ozimek

Canadian health authorities have issued a precautionary recall for masks containing graphene—a nanomaterial made up of a single layer of carbon atoms—citing the need to study health risks after a study in animals found the substance had “some potential” to cause lung toxicity.

The recall, issued Friday by Health Canada, urges Canadians not to use masks that contain graphene or biomass graphene because of the potential for the tiny particles to be inhaled, which may pose a health risk.

The advisory cites research showing that inhaled graphene particles “had some potential to cause early lung toxicity in animals” although it noted that the health risk to humans is still unknown and requires further study.

Health Canada said it is working with manufacturers of the masks to assess their potential impact on people’s health.

“Until the Department completes a thorough scientific assessment and has established the safety and effectiveness of graphene-containing face masks, it is taking the precautionary approach of removing them from the market while continuing to gather and assess information,” the agency said.

Mask design may affect the potential to inhale the graphene particles, while other variables, like the type of graphene used and the amount and duration of exposure to the substance, all have a likely impact on the health risk, Health Canada said.

The agency has called on people not to use the masks for now and to report any adverse events on a Health Canada reporting platform.

Masks containing graphene have been sold and used by adults and children in schools and day cares in Canada, and they may have been distributed for use in health care settings, the agency said. Canadian media outlets reported that around 4.6 million graphene-coated masks were distributed to schools by the government of Quebec, a Canadian province, although it’s unclear how widely the masks were used.

Graphene was discovered in 2004 by Andre Geim and Konstantin Novoselov at the University of Manchester, and they won the 2010 Nobel Prize in physics for their discovery. It is a novel nanomaterial, one atom thick, with a range of possible applications, including in tiny antennae, computer chips, and coatings to absorb potentially harmful waves.

Health Canada noted that the substance has been reported to have antiviral and antibacterial properties, adding that some graphene-containing masks “with COVID-19 claims” have been sold on the Canadian market, although it did not provide specifics as to the claims.

Researchers at a Hong Kong university have produced graphene masks “with an anti-bacterial efficiency of 80 percent,” according to a recent press release published in ScienceDaily, which also noted “very promising results in the deactivation” of two types of coronaviruses, although the team has not yet conducted tests with the CCP (Chinese Communist Party) virus, the novel coronavirus that causes COVID-19.

According to the release, the City University of Hong Kong research team is working with laboratories in mainland China to test the graphene material with two species of human coronaviruses.

“Initial tests showed that it inactivated over 90 [percent] of the virus in five minutes and almost 100 [percent] in 10 minutes under sunlight. The team plans to conduct testings with the COVID-19 virus later,” the release noted.