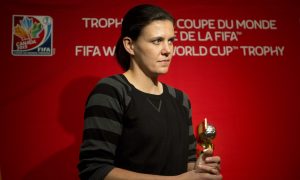 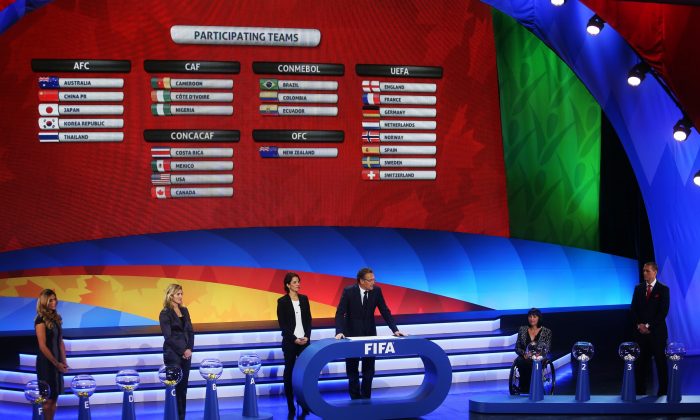 GATINEAU, Canada—Host nation Canada will get off to a relatively challenging start in the Women’s World Cup, but can see some daylight if it can win its group.

With almost exactly six months to go until the start of the Women’s World Cup in Canada, the Canadian Museum of History hosted the highly anticipated drawing of the 24 qualified nations into six groups of four teams last Saturday.

After an elaborate ceremony featuring, among others, a First Nations three-time world champion hoop dancer, Canada was placed in a group with China, New Zealand, and Netherlands—Group A.

Canada and China will face off in the tournament’s opening match on June 6 at Commonwealth Stadium in Edmonton. Canada then faces New Zealand, a team its head coach John Herdman has previously managed prior to his current role, on June 11, also in Edmonton. Canada finishes off the group stage against Netherlands in Montreal’s Olympic Stadium on June 15.

A lot of the day’s chatter focused on Group D with USA, Australia, Sweden, and Nigeria—what is now known as the “group of death” due to the strength of the teams in it. Taking the average ranking of the four teams in each of the six groups, Group D has the lowest at 12.75. Canada’s group is the next lowest at 14. Defending champion Japan has the “easiest” group with an average ranking of 30.25.

“There’s something about knowing who you’re actually preparing for and actually makes it feel like it’s right around the corner,” said Canadian women’s team captain Christine Sinclair on a conference call on Dec. 6.

“We definitely got a hard group. It’s not an easy group,” Herdman said. He also said in a Dec. 5 pre-draw press conference, “Nostalgically, it would be great to get my old team New Zealand. I would cherish that moment with that group of players.”

Herdman spent about 10 years in New Zealand beginning with the under-20 team that is now peaking for this World Cup. “It’s coming full circle for me,” Herdman added.

Herdman’s other wish at the pre-draw press conference was to not be put into another group of death. Canada faced Germany, France, and Nigeria at the last World Cup (Germany 2011), and lost all three matches. That wish seems to have been granted as well.

New Zealand head coach Tony Readings is accustomed to having his team face the host nation and playing on the road. New Zealand faced the host nation at the Women’s World Cup in 2007 (China) and at the London summer Olympics in 2012. “It’s great when you can play the hosts. The test of playing the hosts makes it a different test,” he said.

“We said it [Canada and New Zealand being drawn into the same group] was meant to be,” Readings told the media about what he said to Herdman after the draw. He called Group A “quite an evenly balanced group.” He has a point, as it is the only group with no team ranked outside the top 20.

Dutch coach Roger Reijners saw his team qualify for its first World Cup, but Herdman called Netherlands the dark horses of the tournament.

Reijners also feels China is a bit of an unknown quantity. “We played them a couple of years ago. I don’t really know how strong they are at the moment.”

Light at the End of the Tunnel—What Ifs

By virtue of being the host nation and being in Group A, Canada has the advantage of facing a team that finished third in its group in its Round of 16 match, if it wins its group. In contrast, the winners of Group E and F will face a second place team in their Round of 16 games.

In a theoretical worst case Round of 16 scenario, Canada could wind up facing the third place team to come out of the group of death, which, purely based on teams playing according to their rankings, would be Australia. An easier road could come if Canada faced the third place team out of Group C or E.

Should Canada advance into the quarterfinals, the odds are it would face the winner of Norway and England. Canada’s draw continues to be good here in that the earliest it could face one of the other top six seeded teams (USA, Germany, Japan, Brazil, France) is the semifinal.

And should Canada reach the semifinal, it would face the winner of Brazil and Japan, based on rankings holding true.

“I think the draw is favorable,” Herdman said. “We may miss those real imposing threats until the semifinal.” He acknowledged that winning the group is key to getting a favorable passage in the latter stages of the tournament.