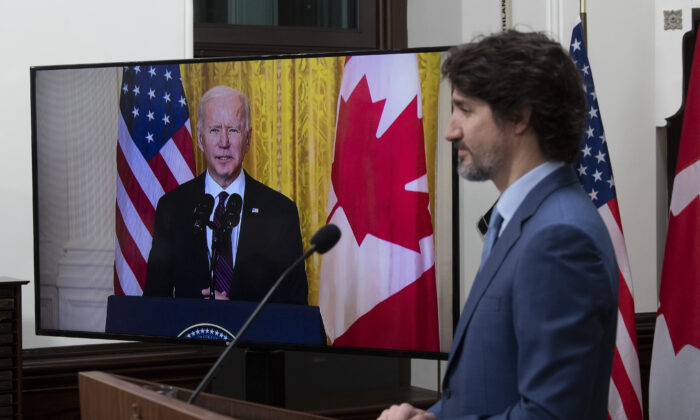 Prime Minister Justin Trudeau looks at a television screen as he listens to U.S. President Joe Biden deliver a statement following a virtual meeting in Ottawa on Feb. 23, 2021. (The Canadian Press/Adrian Wyld)
By Rahul Vaidyanath

Under the Biden administration’s version of “Buy America,” Canada is not likely to get any special exemptions for U.S. government procurement contracts, according to an expert on international trade.

“Canada is on track to be treated like every other foreign country that happens to be a member of the WTO [World Trade Organization] Government Procurement Agreement,” Eric Miller, president of the Rideau Potomac Strategy Group, told The Epoch Times.

“That will inevitably mean that there will be lower exports from Canadian firms in the infrastructure space in Canada both on the goods and services side to the United States,” added Miller, who advises businesses and governments on trade, legislation, and regulatory issues.

The carrot dangling for Canadian firms is a potential US$2 trillion package to be spent over the next 10 years in the context of U.S. President Joe Biden’s American Jobs Plan to rebuild infrastructure.

Buy America and Buy American are two different legislations that have been around for decades. The former, a provision of a 1982 act, focuses on U.S. federal transportation infrastructure procurement, while the latter, enacted in 1933, applies to all U.S. federal government agency purchases of goods.

On June 16, the House of Commons Special Committee on the Economic Relationship Between Canada and the United States released an interim report on “Buy America” procurement policies, which summarizes witnesses’ testimony about Buy America and similar policies. The report makes six recommendations to the government on dealing with the Biden administration’s stance.

The first recommendation is to continue to engage with the United States to try to get a full exemption for Canada from current and any future Buy America policies. The other recommendations focus on strategies to pursue should a full exemption not be possible. These include seeking exemptions for integrated supply chains, specific Canadian sectors, products and sectors where the two countries have immediate shared priorities, and goods having low-carbon emissions.

“How do you leverage Biden’s love for labour unions with that cross-border connection?” Miller asks.

The Biden administration is deeply concerned about China and has only so much time to spend on Canada, Miller said.

“The way that things have tended to work so far is they’re happy to work with Canada on stuff they [the United States] want to work on,” he added.

The parliamentary committee said that Buy American requirements don’t apply to Canada for U.S. federal government purchases covered by the WTO’s revised Agreement on Government Procurement (GPA). The revised GPA, which entered into force in April 2014, requires the United States to treat foreign suppliers no less favourably than its domestic suppliers. Canada, the United States, and 46 other countries are parties to the agreement.

“What are the other points of leverage that you have other than just arguing that the U.S. must comply with its trade obligations, which at this juncture, this administration really doesn’t find that a particularly compelling statement,” Miller said.

He added that this approach will not go very far, since the WTO appellate body is still inoperable five months after Biden took office and the United States has successfully defended Buy America and related policies in trade agreements before.

“I think if you fight it on the basis of … being compliant with trade agreements, it’s going to be a pretty tough road because the atmosphere in Washington is not particularly conducive to responding positively from a Canadian perspective to that sort of argumentation,” he said.

The parliamentary report states that Buy America may prevent integrated supply chains from working properly, lead to job losses on both sides of the border, and make procurement projects more expensive for the American taxpayer.

The United States has established a centralized “Made in America” office to make sure exemptions are granted only under very limited circumstances. Miller said Biden’s first nominee for “Made in America” director, Celeste Drake, comes from an organized labour background like his own.

“He’s Joe from Scranton, as they call him … arguably the most pro-labour union president the U.S. has had in decades,” he said, adding that Biden is not bolstering Buy America to cater to former U.S. president Donald Trump’s voters—he sees it as serving his own voters.

A more stringent Buy America is not the first blow to Canada from the Biden administration. Biden cancelled the Keystone XL pipeline via executive order on Jan. 20, saying it would not serve the U.S. national interest.

Canada has not succeeded in getting the project reinstated, and TC Energy, the Calgary-based company behind the project, has since pulled out.

Rahul Vaidyanath
Journalist
Follow
Rahul Vaidyanath is a journalist with The Epoch Times in Ottawa. His areas of expertise include the economy, financial markets, China, and national defence and security. He has worked for the Bank of Canada, Canada Mortgage and Housing Corp., and investment banks in Toronto, New York, and Los Angeles.
Epoch Share
Friends Read FreeFacebookTweet
Copy Link