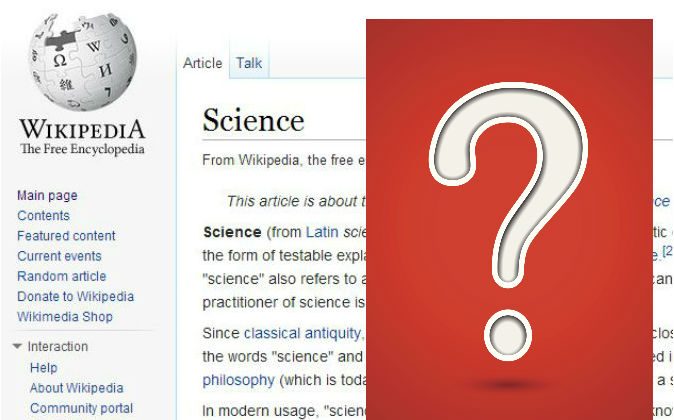 Wikipedia editors have much power to shape the understanding of the general public. Do you trust them? (Screenshot/Wikipedia.com; Question mark via Thinkstock)
Beyond Science

Wikipedia is not considered an authoritative source in academia or in journalism, but it’s often the go-to source for the general public. Who’s behind the information?

A team of activists under the label “Guerrilla Skepticism on Wikipedia” are making concerted efforts to change science content on Wikipedia. Some are concerned this group could skew public perception of scientific principles and studies.

The Guerrillas started their work not long after so-called “Climategate” scandal in 2009. Green Party activist William Connolley created or rewrote 5,428 articles on Wikipedia, including many related to the politics of global warming and scientists whose views did not correspond to his own on the issue, according to reporting by Lawrence Solomon of the National Post. When Connolley became a Wikipedia website administrator, he removed 500 articles and barred more than 2,000 contributors “who ran afoul of him,” wrote Solomon.

Oxford University researchers found in a recent study that the two topics fueling the most heated editing wars on Wikipedia are Israel and God.

“Everyone knows that there are opposing views on politics and religion, and many people recognize a biased account when they see it. But in the realm of science, things are different,” wrote Dr. Rupert Sheldrake, a biochemist and author educated at Cambridge University and Harvard who is known for his controversial theories.

“Most people have no scientific expertise and believe that science is objective,” he said on his website. But he argues that strict materialism—the ideology of the Guerrilla Skepticism team—is a subjective worldview that does not maintain the supposed objectivity of science.

He accuses the Guerrilla Skepticism team of systematically abusing the trust of the Wikipedia readership. Susan Gerbik runs the team of almost 100, said Sheldrake, and “their aim is to ‘control information’ … Ms Gerbik glories in the power that she and her warriors wield.”

Guerrilla Skepticism’s website states: “The mission of the Guerrilla Skepticism editing team is to improve skeptical content on Wikipedia. We do this by improving pages of our skeptic spokespeople, providing noteworthy citations, and removing the unsourced claims from paranormal and pseudoscientific pages.”

How Do the ‘Guerrillas’ Operate?

The editors on the team have varying levels of experience. New editors work from pre-selected podcasts. The editors listen to the podcasts multiple times to see if they contain information that can be used to support or contradict Wikipedia entries.

The podcasts are not chosen with a specific target topic in mind, explains the website. “This forces us to expand to people and organizations we have never heard of. And it exposes our editors to podcasts and people they were unfamiliar with. Once the podcast has been used as a citation, then that spreads the Skeptic Love to Wikipedia readers who might never have discovered that podcast.”

In December 2013, two and a half years after starting its work, the group tallied the articles it had “either rewritten or created from scratch.” The group had almost 100 on its list (not counting duplicates for the same article in multiple languages), including topics such as “rationalism,” and “spontaneous human combustion.”

They worked on the biographies of scientists, boosting those they approve of, said Sheldrake, and defaming those they don’t. Sheldrake’s biography was “captured” by “a commando squad of skeptics,” he said.

Does Wikipedia Have Any Rules Against This Behavior?

“Wikipedia does not have firm rules,” is one of the five pillars around which Wikipedia is built.

Another of the five pillars states that Wikipedia should be written from a neutral point of view. Wikipedia operates largely on a self-policing policy, whereby various citizen editors keep each other in line.

Concerns remain about the quality of information. The Wikipedia entry on the topic “Wikipedia” states: “A 2005 investigation in Nature showed that the [Wikipedia] science articles they compared came close to the level of accuracy of Encyclopædia Britannica and had a similar rate of ‘serious errors’. Britannica replied that the study’s methology [sic] and conclusions were flawed.”

If people take Wikipedia for what it is, a quick reference resource that may not be entirely accurate, its potential flaws will not have as big an impact.

“Skepticism is a normal, healthy attitude of doubt,” Sheldrake wrote. “Unfortunately it can also be used as a weapon to attack opponents. In scientific and medical contexts, organized skepticism is a crusade to propagate scientific materialism.”

He said: “Fortunately, a few editors arguing for a more neutral point of view have not yet been bullied into silence. An editing war is raging as you read this.”