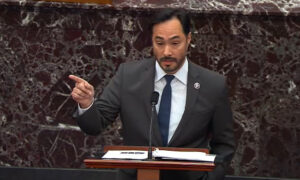 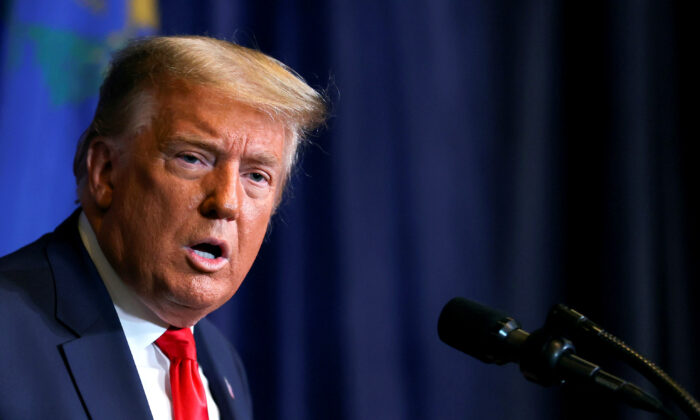 Can Trump Be Disqualified From the Presidency?

After failing to convict former President Donald Trump in an impeachment trial, some Trump-detractors are promoting the idea of Congress banning him from the presidency. They believe Congress can use a provision in the Constitution’s 14th Amendment to do so.

This proposal, like the impeachment itself, panders to those who fear and loath the former president. Like impeachment as well, it distracts public attention from the more important question of whether the official 2020 election returns were accurate—and, if not, how state lawmakers should respond.

Otherwise, however, the proposal serves no purpose, because Congress cannot disqualify Trump from serving as president again.

The 14th Amendment was ratified in 1868, in the wake of the Civil War. For reasons both good and not-so-good, constitutional commentators treat this amendment very favorably. Yet the 14th Amendment is possibly the worst-written part of the Constitution.

Many other constitutional provisions may seem unclear on first reading, but once you’ve studied their background the meaning crystallizes. On the other hand, much of the 14th Amendment defies analysis. Not only is it longer than any other amendment, but it’s an endless source of unanswered questions. Commentators have spilled oceans of ink trying to explain its terms.

The clause bars from certain state and federal positions any individuals who (1) previously held public office, and (2) therefore took an oath to support the Constitution, but (3) later “engaged in insurrection or rebellion” against the United States, in violation of the oath. The purpose was to prohibit the chief functionaries of the former Confederate States of America from holding government office.

Trump’s detractors claim that because Trump “engaged in insurrection” on Jan. 6, 2021, Congress can wield this provision to disqualify him from holding the presidency again.

One weakness in this claim is factual: Trump’s Jan. 6 speech was not a fiery call to invasion delivered on the Capitol steps. It was a speech delivered on a cold day a mile and a half from the Capitol, in which he told his supporters to walk “peaceably” to the Capitol to cheer on members of Congress. Moreover, the incursion was planned long before he spoke, and it began before he finished.

It’s also doubtful whether the incursion qualified as an “insurrection or rebellion.” In this respect, it’s useful to compare it to last year’s Antifa–Black Lives Matter (BLM) violence, which was far more extensive, cost more lives, and damaged far more property. Many Antifa–BLM organizers sought explicitly to upend established authority—as in Seattle’s Capitol Hill Autonomous Zone. That was insurrection. But the leaders of the Capitol incursion had no such pretensions. Their lawlessness was more like a simple riot.

Such facts, in conjunction with the free speech guarantee of the First Amendment, render it highly unlikely that any court would convict Trump of insurrection.

Well, could Congress deploy the Disqualification Clause against him without a court judgment?

To do so, Congress would have to pass a measure declaring Trump guilty of the crime of insurrection and imposing penalties upon him. But the Constitution explicitly bans such measures.

At common law, attainder was the passing of sentence on a person convicted or outlawed for treason or felony. Such a person was attainted (i.e., “tainted” or out of grace) in the eyes of the law. A bill of attainder is a legislative measure declaring a specific person to be guilty of treason or felony. The Constitution absolutely prohibits bills of attainder.

Moreover, during the 20th century the Supreme Court widened the original definition of “bill of attainder,” rendering it even less likely a unilateral congressional disqualification would survive judicial review (pdf).

In fact, such a measure would be doubly unconstitutional. That is because it also would violate the Fifth Amendment’s rule against punishment without due process of law.

Advocates of disqualifying Trump cite a precedent: In 1919, Congress excluded Victor Berger, a socialist, from joining the House because he had opposed entering World War I. A special committee had concluded Berger was unfit for office. Unfortunately, for Trump-haters, however, in 1969 the Supreme Court ruled this kind of exclusion from Congress to be unconstitutional (pdf).

As if those obstacles aren’t sufficient, there’s more: There’s good reason to believe that the Disqualification Clause doesn’t apply to presidency at all.

The Disqualification Clause lists the offices from which one can be disqualified. They are “Senator or Representative in Congress, or elector of President and Vice President, [and] any office, civil or military, under the United States, or under any state.” Note that the president and vice president are not mentioned.

Perhaps you might think that presidency is an “office … under the United States.” But it probably is not.

Seth Barrett Tillman, a leading constitutional scholar, has analyzed all these phrases and their surrounding history.

He tells us that “Officers of the United States” are appointed executive and judicial officers, such as the secretary of state and federal court judges. The phrase doesn’t include the president, vice president, members of Congress, or congressional officers such as the clerk of the House and the secretary of the Senate. If you scan the Constitution itself, you can readily see that the president is not an “officer of.” (See Sections 3 and 4 of Article II.)

“Officers under the United States” include all the “officers of” (appointed executive and judicial functionaries) plus appointed legislative officers, such as the clerk of the House and secretary of the Senate. But Tillman concludes that this term also excludes elected politicians such as the president.

Tillman has found a great deal of Founding-Era evidence backing up his position.

When the 14th Amendment itemizes classes of people who have taken an oath and potentially can be disqualified, it lists members of Congress, certain state officials, and officers of the United States. So the president is not included.

When the 14th Amendment itemizes the offices from which they can be disqualified, it refers to members of Congress, presidential electors, certain state officials, and “officers under the United States.” Again, the president is not included.

Why did the framers of the 14th Amendment exclude the president from the Disqualification Clause? Possibly, it was just another case of poor drafting. Or there might have been some good reasons. Maybe the framers wanted to preserve the president’s independence against an overreaching Congress, so they blocked Congress from disqualifying him. Maybe they saw disqualification from the presidency as too great an intrusion on the right of people or states to elect whomever they wished.

But for whatever reason, the Disqualification Clause doesn’t allow Congress to unilaterally bar someone from the presidency.

The proposal to disqualify Trump probably is better seen as another example of the left’s constitutional ignorance rather than as a serious threat to the former president.

Here is the text of Section 3 of the 14th Amendment:

“No person shall be a Senator or Representative in Congress, or elector of President and Vice President, or hold any office, civil or military, under the United States, or under any state, who, having previously taken an oath, as a member of Congress, or as an officer of the United States, or as a member of any state legislature, or as an executive or judicial officer of any state, to support the Constitution of the United States, shall have engaged in insurrection or rebellion against the same, or given aid or comfort to the enemies thereof. But Congress may by a vote of two-thirds of each House, remove such disability.”

Robert G. Natelson is a senior fellow in constitutional jurisprudence at the Independence Institute in Denver, a retired constitutional law professor, and a leading originalist scholar. He is the author of “The Original Constitution: What It Actually Said and Meant.”