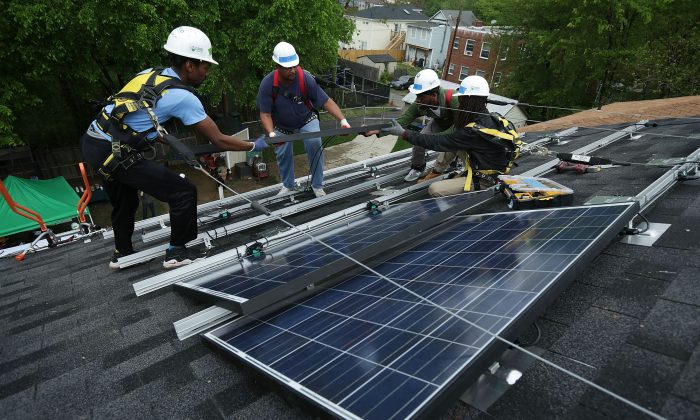 Workers install solar panels on a home in Washington on May 3. (Alex Wong/Getty Images)
Environment

Renewable energy at the whimsy of nature, but the grid needs stability
By Tara MacIsaac

As the country pushes ahead with renewable energy goals, the challenges facing the grid are substantial, but not insurmountable, according to energy experts.

Keeping the lights on through a tangle of transmission lines and substations with fluctuating demands has always been a complex task. Add to that the relatively unpredictable ups and downs of solar or wind energy generation, depending on the weather.

New York state, as well as other regions across the United States, will have to ensure reserve energy is ready for when the sun isn’t shining or the wind isn’t blowing. It will have to make sure the grid’s infrastructure, including transmission lines, is ready to deliver the energy from the solar arrays or wind farms to the customers.

Reserve capacity and transmission, “are age-old issues that aren’t new in the energy space,” said New York Department of Public Services Manager of Strategic Engagement Peter Olmsted. But, he said, renewable energy planning gives us an opportunity to view them in a new light. It brings new challenges, but also new solutions.

Transmission Infrastructure: ‘Not in my backyard’

In September, New York state wrapped up three years of negotiations with communities around Rochester over the controversial plan to build a substation and 23 miles of transmission lines across active farmland.

The infrastructure, needed to maintain the stability of the local grid, has now been moved to unused farmland and natural land, with mitigation measures in place to lessen the environmental impacts.

These are the kinds of disputes inherent in building infrastructure for power transmission.

The New York Independent System Operator (NYISO), responsible for managing the flow of power across the state, has said plans for wind and solar projects upstate may require some 1,000 miles of new transmission lines to deliver the power to the metropolitan regions of southeastern New York.

Solar companies are making offers to many upstate farmers to use their land.

Solar companies are making offers to many upstate farmers to lease their unused land, the Buffalo News reported on Sept. 17, much as natural gas companies made an upstate land-grab before hydraulic fracturing was banned.

The state has disputed the NYISO projection, saying improvements to transmission projects already on the table will be sufficient.

Olmsted said the focus will be on placing solar and wind power projects close to the communities they serve, making the additional transmission lines unnecessary. He cited as an example the proposed Long Island offshore wind farm, which would be close to highly populated load centers.

The state will also look at moving away from large, centralized power systems toward localized power generation.

Well-planned distribution could not only help cut the complications of building transmission lines, it could also help with the problem of peaks and dips in power generation depending on the weather. For example, if solar panels and wind turbines are placed well, when some solar panels are in the dark, others will get light or when some wind turbines are still, others will be spinning.

Olmsted said that energy storage as well as choosing the locations well for solar and wind power resources will help New York manage the uncertainties.

Storage is costly, making smart distribution a better solution, according to a U.S. Department of Energy report.

Andrew Mills, a researcher at Lawrence Berkeley National Laboratory, led a study published in August looking at the various planning processes across the country for integrating distributed solar power into the grids.

He told Epoch Times that it is important to plan for the actual amount of energy solar panels or wind turbines can produce at specific times (like peak demand times). Some regions are doing this better than others, he said.

Planners will also have to take into account ramp-up and shutdown costs, or in other words, the flexibility needed to manage the peaks and valleys of renewable energy production. Having this flexibility is estimated to cost anywhere from 5 cents to $10 per MWh.

In terms of transmission infrastructure, he said that existing infrastructure may be able to handle added renewable energy up to a certain point, after which the costs for upgrades will increase. For example, one study he reviewed predicted a cost of 30 to 50 cents per watt of solar after a threshold level of solar adoption. To put that in perspective, the capital cost of buying solar is about $3 per Watt.

Another important aspect of utility planning, Mills said, is taking into account the amount of solar power rooftop panels will pump into the grid. NYISO is doing a good job of this, he said.

Planning ahead for this can be difficult, because it depends on how many people decide they want to install solar panels on their homes or businesses. But utilities can look at factors such as income demographics for a region, energy use, and the economics of rooftop solar to make predictions.

“There’s always been a number of factors that are very uncertain in planning,” Mills said. He gave the examples of fluctuating natural gas prices, or economic recession. “Utilities have always faced uncertainties in the past and they’ve developed a number of planning processes that have allowed them to make decisions under uncertainty.”

Solar power brings additional uncertainties, but he is confident utilities can face them with good planning.