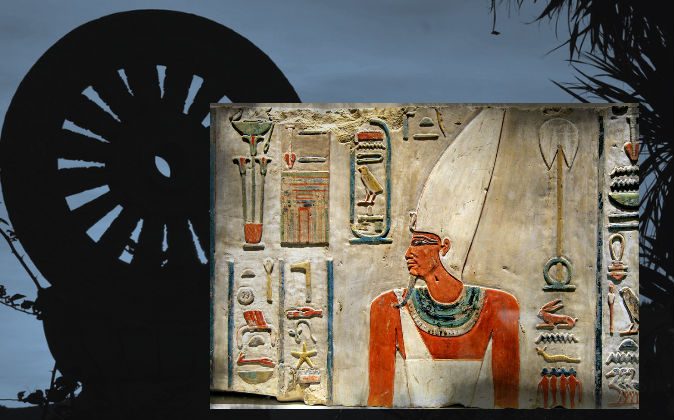 We’ve heard of psychics helping police solve crimes, but what about those who say they can remember their ancient past lives—could they help archaeologists solve history’s mysteries?

Joan Grant was made famous by her 1937 book “Winged Pharaoh,” in which she wrote about a pharaoh’s daughter named Sekeeta—purportedly one of her past-life incarnations. What she said about ancient Egypt seems to correspond well with what archaeologists know, and even perhaps to presage some discoveries not yet made when she wrote the book. Of course, the distant history is foggy enough that this cannot be claimed as certain proof she lived a past life in ancient times.

Similarly, an Oxford student spoke under hypnosis of a past life as an Egyptian carpenter who worked on Pharaoh Den’s tomb. What he said proved correct, but some say it is unlikely that he would have learned the detailed information he gave through normal means.

Famed author H.G. Wells, who sympathized with Grant, once told her: “It is important that you become a writer.” He said she should keep her secrets to herself, until “… strong enough to bear being laughed at by fools.”

Joan Grant was the daughter of J.F. Marshall, a respected British entomologist, and Blanche Marshall, a society psychic said to have predicted the sinking of the Titanic.

In more than 100 “recall” sessions, Grant is said to have dictated the episodes of “Winged Pharaoh.” In a sort of trance state, she tapped into these “memories,” piecing them into a chronological narrative afterward.

Jean Overton Fuller (1915–2009), a poet and artist who specialized in writing biographies, contacted Egyptologists and studied hieroglyphics to verify what Grant “saw” after spending a weekend with Grant in the 1940s. Fuller presented her findings and her experiences with Grant in a paper published after Grant’s death in 1989. It was edited by James A. Santucci of the Department of Religious Studies at California State University, and published by the Theosophical Society, of which Fuller was a member. The Theosophical Society is known for its study of the occult. According to its website, its members belong to “any religion or none,” united in a “desire to study religious truths and to share the results of their studies with others.”

Grant’s husband, Leslie Grant, was an archaeologist. When Grant would accompany her husband on digs in Iraq, she would look at the artifacts and tell him information about them that would prove useful, said Fuller. She went to Egypt with him, but did not experience any significant insights on that trip. About 18 months later, she began to purportedly recall her ancient connection with Egypt.

She was a pharaoh’s daughter, a priestess who was trained in mystic practices, including how to remember past lives. She became a pharaoh herself.

In ancient Egypt, a person could be known by multiple names. Grant said her priest-name was Meri-neyt, and she wrote a chapter titled “The Tomb of Meri-neyt,” in which she watched her own tomb being built while she was still alive. Sekeeta had observed that it was where she would rest in death under the name of Meri-neyt.

A queen of a similar name, Meryet-Nit, remains a figure of controversy in Egyptology. She lived during Egypt’s First Dynasty, but it is unclear whether she ruled in her own full right. If so, she would be the first female pharaoh and the first queen regent known to history.

Egyptologist Walter Emery (1902–1971) was puzzled by Queen Meryet-Nit’s tomb, Fuller noted, “because her tomb was so large and important that he felt she must have been a Queen Regent.”

The first four or five pharaohs of Egypt’s First Dynasty (starting around 5,000 years ago) are usually listed as such:

Meryet-Nit is sometimes said to be the daughter of Djer or the wife of Djer. Fuller speculates that she may have actually been Djet. Grant wrote that Sekeeta’s Horus name, Zat, was written in hieroglyphs as a snake. Djet is written as a snake.

Earlier transliterations of this hieroglyph had spelled it Zet, which is close to Grant’s Zat. Carol A.R. Andrews of the Egyptological Department of the British Museum answered Fuller’s inquiry on this point, part of which read: “You will have noted that the name of Djet … is still disputed. All that is actually in the serekh [a rectangular enclosure indicating that the hieroglyphs therein are royal names] is the serpent, which is usually transliterated as dj or possibly sjt.”

Aside from the snake heiroglyph, Fuller centers in on Djet because the next pharaoh in line is Den, the name Grant gives for Sekeeta’s son.

If Grant’s vision or story is true, it would clear up the Narmer/Menes/Hor-Aha controversy. In “Winged Pharaoh,” it is explained that Narmer ruled in the south before Menes united Upper Egypt and Lower Egypt, becoming the first pharaoh of the dynasty. The descendants of Menes respected Narmer, according to Grant’s account. Fuller thought Hor Aha might be the same person as Menes, since the Egyptian word “men” means “established.” The “es” was added to form Menes in a Greek text from which we know the name as such.

Narmer would be a pre-dynastic pharaoh and Hor Aha would be the first pharaoh of the dynasty, also the one who united Upper and Lower Egypt, thus making the name “Established” a suitable one (“Es” was added to the Egyptian word  added in the Greek text from which we know the name as Menes). That Menes united Upper Egypt and Lower Egypt is generally accepted, though still open to some debate.

What impressed Fuller is that Grant’s conception of Narmer as a predynastic pharaoh came 24 years before Emery came up with that theory. “It could not have been from Emery that Joan took this since he did not publish until 24 years later than she; neither would he, as a scholar, have been likely to consult what he would probably have regarded as a novel.” Grant’s books were written as historical fiction, although it is clear from her autobiography and other writings that they represent what she believed to be her real past lives. She claimed to remember numerous past lives throughout the ages.

Grant had described some of the objects surrounding her during her life as Sekeeta. She wrote: “In the temple I had but a single comb and a little copper mirror, in which my reflection was blurred … Now my ivory combs were carved with my seal as a Winged Pharaoh, the hawk of the trained will upon the triumphant boat, above the wings of a Winged One; then, below this, my Horus name, Zat, written as a snake, next to the key of life and flanked by two rods of power, power wielded upon Earth and away from Earth.”

Flipping through Emery’s book “Archaic Egypt,” Fuller recalled, “It gave me a start when first I saw in Emery a line-drawing of exactly that.” It was labeled “Comb of Uadji.” Uadji, also spelled Wadji, is another name of Djet, the pharaoh Fuller saw as most closely related to Grant’s story.

Regarding Grant’s description of this comb artifact, Fuller wrote: “But was it unaided recall or could she have seen it?”